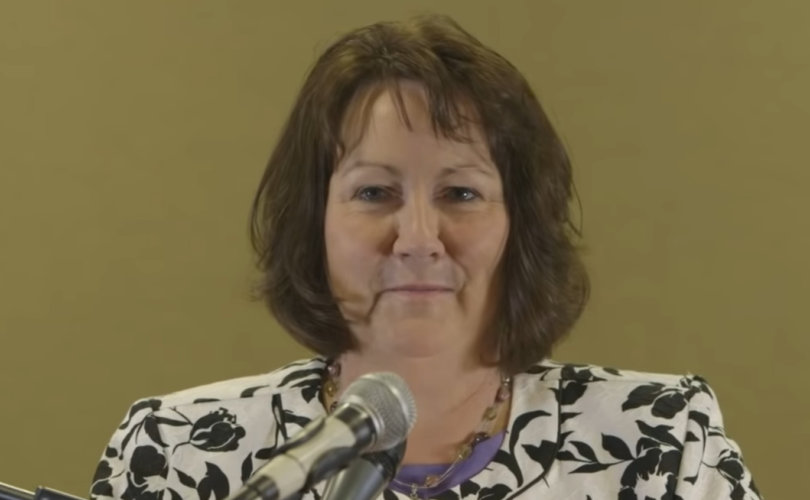 Remembered as a dear friend, a beloved foster and adoptive mother of 32 years, a woman “of joy,” and a passionate advocate for life, her friend and co-worker Shawn Carney testified in a tribute to her that her life “was a walking miracle.” Thayer became a passionate activist and speaker for the pro-life movement after having worked nearly 18 years as director of a Planned Parenthood facility in Storm Lake, Iowa.

Thayer wrote and publicly spoke about her interior journey and final breaking point that led her to a remarkable life reversal: She came to launch a 40 Days for Life prayer campaign during which she prayed outside of her former Planned Parenthood facility, to see it close soon afterward. It was this deeply impactful time that made her dedicate the rest of her life to defending the unborn.

Thayer explained in 2019, “For me, the process of coming to see the truth was long and slow. As a mom, it hurt me every time I was in, or even near, the abortion unit. As my heart softened, I knew my days in the abortion industry were numbered.”

Thayer shared how she was disturbed when her center began to do “webcam abortions,” which she explained is a chemical or medication abortion that is done with no doctor in the facility. “I kind of spoke up against it and shared my thoughts on it and what a bad idea it was and how many women were going to be hurt by that. And then I ended up getting fired,” said Thayer.

“I thought, I’ve done my part, I’m out of there, and I’m just gonna let this go,” she continued. “That really worked well for me for quite a while, but God just kept nudging me that you haven’t really spoken up enough.”

She already knew of the power of the 40 Days for Life ministry, a movement centered on 40-day “round-the-clock prayer vigils” outside abortion centers. Thayer has explained, “Abortion workers abhor it. Clients would often not show up when anyone was praying. With strict abortion goals, a high no-show rate meant big trouble for staff.”
She thought it would be “a good place to start” pro-life activism.

After she began a local 40 Days for Life prayer vigil, Thayer struggled with the idea of praying outside of the Planned Parenthood facility she used to manage: “Even [at] that point I’m arguing with God, like, ‘You know God, I got this 40 Days for Life going, surely you’re not going to make me go down there and stand on the sidewalk where I worked and pray. How embarrassing is that! And [to] face my former co-workers … Please God, not that, could I just sit in my van and pray?’”

She went on, “It wasn’t an audible voice, but it was clearly God’s voice saying, ‘Get out and get going.’ So I did, and prayed on the sidewalk. I can honestly say during those 40 days, I spent more time with God one-on-one than I ever have in my entire life. It blessed me in a profound way, more than I can even say.”

“I know it was a blessing to the workers there. And they would be angry when they’d come and I’d be sitting there in the morning but I always had a smile,” she continued.

Shortly after that prayer vigil, the Planned Parenthood facility she used to manage became the first of 21 Iowa facilities to close permanently.

Thayer recounted the day she heard about the closing: “Of course that’s what we prayed for, for 480 hours, in front of Planned Parenthood, that it would close. But when it happened I was absolutely stunned, I remember thinking this is too good to be true.”

“And I knew for the first time, really in my life, that I was where I was supposed to be,” said Thayer.

Thayer went on to become Director of Outreach for 40 Days for Life, where President Shawn Carney says she is “irreplaceable.”

“The local leaders absolutely fell in love with her,” said Carney is his tribute video to Thayer. “Sue’s disposition, for anyone who ever knew her, was one of joy. [She] had seen the evil of abortion … firsthand, but she wasn’t bitter, she wasn’t mad. She clearly was somebody who had embraced the beautiful mercy of Jesus Christ.”

Fellow former Planned Parenthood director Abby Johnson testified that Thayer was a “force in the pro-life movement” and “an amazing speaker.” But she was also “an amazing friend.”

“She was a constant encourager. She was the friend that you could call and ask, “Will you pray for me?” And you knew that she would drop everything and pray for you that moment,” wrote Johnson.

“A world without Sue feels almost unbearable, but I’m encouraged to know that I WILL see her again. I think Sue would want everyone to know just how much she loved her Savior. She would want you to know Him,” Johnson went on. “She will be greatly missed by many.”