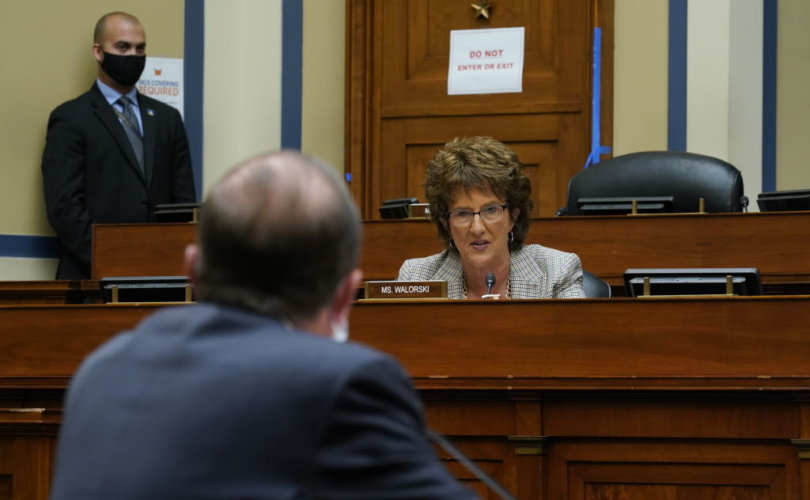 SOUTH BEND, Indiana (LifeSiteNews) – Pro-life Republican congresswoman Jackie Walorski (IN) was killed in a car crash when the driver of the SUV she was struck an oncoming car, according to a statement by local police, prompting an outpouring of grieve from pro-lifers.

Two people traveling with Walorski and the driver of the other car also died.

The crash took place Wednesday at 12:32 p.m. local time, on Indiana state road 19 south of state road 119, according to the Elkhart County Sheriff’s Office. Walorski was travelling in an SUV driven by Zachery Potts, her district manager and a local Republican official, when it crossed the median and hit an oncoming car.

Potts, Walorski’s communications director Emma Thomson, and the driver of the other car, Edith Schmuker, also died in the crash. Police have yet to determine why the SUV drifted into the oncoming lane.

Walorski’s office released a statement about the crash, stating, “Dean Swihart, Jackie’s husband, was just informed by the Elkhart County Sheriff’s office that Jackie was killed in a car accident this afternoon. She has returned home to be with her Lord and Savior, Jesus Christ. Please keep her family in your thoughts and prayers. We will have no further comment at this time.”

It is with a heavy heart that I am sharing this statement from the Office of Congresswoman Jackie Walorski. pic.twitter.com/UEPoKBDf5N

Pro-lifer advocates lamented the death of the congresswoman, who had a 100% voter score from National Right to Life.

Carol Tobias, president of National Right to Life, reacting to news of the crash, stated, “We mourn the loss of Representative Jackie Walorski who supported protections for the most vulnerable among us … The pro-life movement is deeply indebted to Congresswoman Walorski for her service on behalf of the unborn.”

We are shocked and heartbroken by the news from Indiana. Congresswoman Jackie Walorski was a true hero in the pro-life movement.

Our prayers and condolences are with her family and the families of her staff members, Emma and Zach, and all those who worked together with them. pic.twitter.com/q7hacfiOqG

Our deepest condolences to Representative Walorski's family and her team. The Family Policy Alliance team is joining together in prayer for you all. May God's comfort and grace, and the gift of His presence, be with you. May He draw near to the broken-hearted. https://t.co/CdZBZ59YJb

Reacting to the crash, President Joe Biden also released a statement, saying “Jill and I are shocked and saddened by the death of Congresswoman Jackie Walorski of Indiana along with two members of her staff in a car accident today in Indiana.”

“We send our deepest condolences to her husband, Dean, to the families of her staff members, Zachery Potts and Emma Thomson, who lost their lives in public service, and to the people of Indiana’s Second District who lost a representative who was one of their own.”

Speaker of the House Nancy Pelosi ordered flags to be flown at half-staff at the Capitol building, according to a tweet posted by Drew Hammill, her communications director. Indiana Republican Governor Eric Holcomb also asked that all Hoosiers fly their flags at half-staff until the day of Walorski’s burial.

Speaker Pelosi has ordered the flags at the U.S. Capitol to be flown at half-staff due to the passing of Congresswoman Jackie Walorski of Indiana.

In May 2021, Walorski was nearly run over while praying at an abortion business in South Bend. Capitol Police opened an investigation into the incident.

Last month, Walorski said in a statement about recent House votes on the pro-abortion so-called Women’s Health Protection Act and the Ensuring Access to Abortion Act, saying “At Speaker Pelosi’s urging, House Democrats once again voted to greenlight abortion at any time in pregnancy, anywhere in the country, and bankrolled by American taxpayers. Abortion on demand is a direct affront to pro-life values and Americans’ conscience rights.”

“This radical anti-life agenda goes beyond Roe v. Wade to not only encourage – but also celebrate – abortion and the destruction of life,” she continued.

Both the Republican and Democrat Parties of Indiana will nominate candidates for a special election to determine who will finish Walorski’s term, as per Indiana state law. It is not clear when the special election will take place, though it may coincide with the November election. If this is the case, voters would have to vote for a representative twice.

Had the Republicans taken back the House, Walorski, the ranking Republican on the House Ethics Committee, would have become committee chairwoman. She would also have taken a leadership role in the House Ways and Means Committee provided a Republican victory, and would have overseen the subcommittee on worker and family support, according to Politico.

Walorski has represented Indiana’s Second Congressional District since 2013. Before that, she was a news reporter in South Bend and previously served for five years in the Indiana state legislature. She also did missionary work in Romania with her husband.