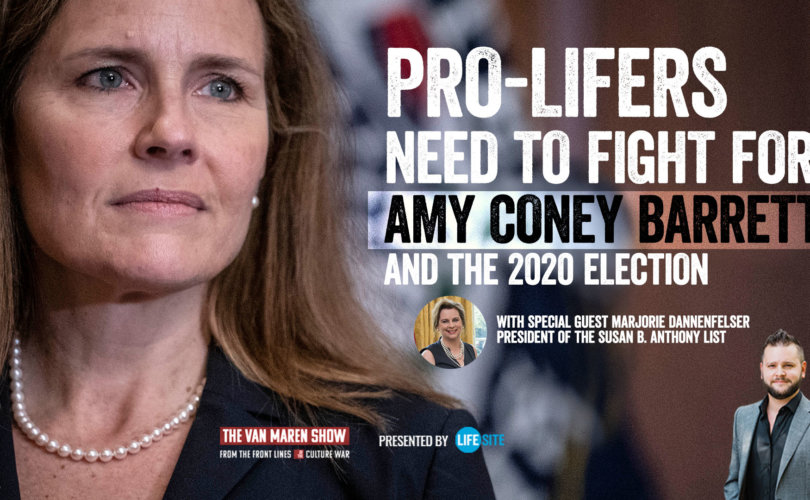 September 30, 2020 (LifeSiteNews) — In today’s episode of The Van Maren Show, Marjorie Dannenfelser from the Susan B. Anthony List tells Van Maren that this election is crucial for the pro-life movement. Dannenfelser warns listeners that if the Democrats win, it will have a generational impact, as they will fight to take away our nation’s “founder-given tools to actually come up with a consensus.”

The SBA List is on a mission “to end abortion by electing national leaders and advocating for laws that save lives, with a special calling to promote pro-life women leaders.”

Dannenfelser is the president of the Susan B. Anthony List and has helped to elect hundreds of pro-life candidates to national and local positions. She serves as a pro-life adviser to President Trump and has helped to shape the pro-life policies implemented by the Trump administration. In her new book, Life Is Winning, Dannenfelser shares her experiences fighting for life, including some of her encounters with President Trump and his administration.

Dannenfelser isn’t a newbie in Washington and has seen how elections and politicians can further the pro-life movement or set it back. Dannenfelser tells Van Maren she is optimistic about Amy Coney Barrett’s nomination to the Supreme Court.

Amy Coney Barrett is a pro-life mother of seven with a history of supporting life in her previous rulings.

Dannenfelser is optimistic that Barrett will be nominated by the Senate, but she warns that no one foresaw the muck the Democrats would bring up during the Kavanaugh hearing. Pro-lifers shouldn’t let their guard down just yet with regard to the Barrett nomination.

Dannenfelser, who has worked closely with President Trump on pro-life issues and policy, says he is a truly pro-life president who has turned his stance on abortion into action.

Dannenfelser also reminds listeners that Trump has made a lot of little decisions that combined have had a big impact on the slow erosion of the abortion agenda, including the defunding of Planned Parenthood.

Trump has a visceral reaction to abortion, to the ripping apart of a baby limb from limb; “all of him recoils against that.”

Dannenfelser points to right before the State of the Union address two years ago, when President Trump invited a handful of people to discuss the address with him. This was just after the governor of Virginia said he would allow a baby to die if the baby were born alive from an abortion.

Dannenfelser tells listeners the president burst into the room. “Can you believe what that governor in Virginia is doing? That is outrageous. Can you believe he would just allow the baby to just die there, sitting on the table? It’s crazy!”

“It was like he had seen into the heart of darkness and came out fighting,” Dannenfelser shares. He was horrified and he wanted to fight.”

In addition to his policies, Trump stood behind pro-life candidates across the nation, helping to establish a strong pro-life base in the Legislature.

If the Democrats can pack the Supreme Court and add Puerto Rico and Washington, D.C. as states, then pro-lifers will have little hope of passing any pro-life legislation for generations. This isn’t an election to sit out and hope we can reverse the decisions in the future. “So much damage will have been done.”

“Taking the position that politics and elections and laws basically don’t matter … in terms of stopping this and it doesn’t really matter, eventually we will be OK, we will bring it back to this, is just too convenient,” Dannenfelser tells listeners.

Be sure to tune in to today’s show to hear more from Dannenfelser about her thoughts on the election, Amy Coney Barrett, and the future of the pro-life movement.