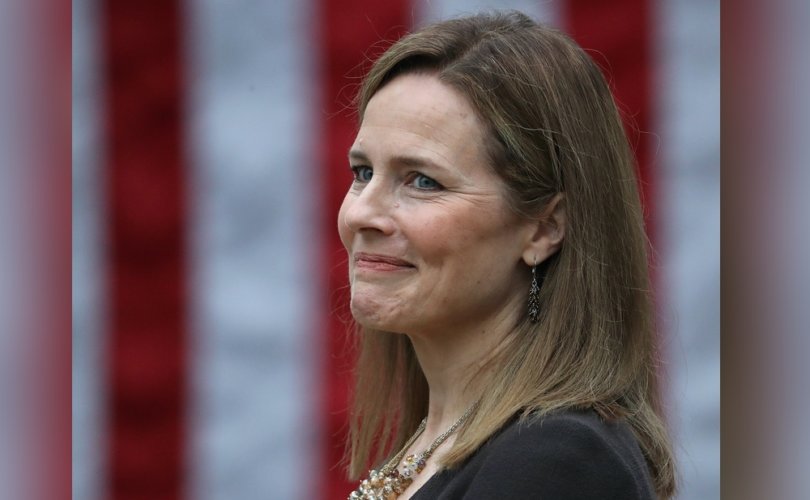 If confirmed, Barrett will replace pro-abortion Justice Ruth Bader Ginsburg, who died just over a week ago. She is President Donald Trump’s third Supreme Court nomination during his first term in office.

Barrett is a Catholic mom of seven and former University of Notre Dame law professor, where she was part of the Faculty for Life group.

“Amy Coney Barrett is a brilliant jurist in the mold of the late Justice Scalia, and President Trump could not have made a stronger selection to fill this Supreme Court vacancy,” she continued. “We have full confidence that the pro-life Senate majority will move swiftly to confirm her before the election.”

Dannenfelser recalled the attacks Barrett endured during her 2017 confirmation hearing to become a judge for the U.S. Court of Appeals for the Seventh Circuit.

“An accomplished woman of bold conviction, Amy Barrett withstood outrageous personal attacks on her Catholic faith from pro-abortion senators with grace and integrity during her 2017 confirmation hearing,” she commented. “Judge Barrett has shown courage, wisdom, and brilliance during her tenure on the 7th Circuit. Her experience and expertise make her extremely qualified to serve on the nation’s highest court.”

Penny Nance, CEO and President of Concerned Women for America, rejoiced that “President Donald Trump has, for the first time in our nation’s history, given conservative women a voice on the nation’s highest court. Amy Coney Barrett is a constitutionalist, a top-notch legal scholar, and simply the best choice for this seat.”

“Once again, President Donald Trump has delivered for America, and especially for women,” she added. “I am honored to be here to witness this historic announcement at the White House, and I’m eager to get to work to see this nomination through a final vote.”

Nance described Barrett as “the sort of role model we want for our daughters.”

“We are ready to stand against the unjust and, frankly, bigoted attacks we’ve heard laid against Judge Barrett’s faith,” Nance emphasized. “We hope Senate Democrats are able to pull themselves together and rise about such anti-Christian and anti-American dogmatism. But we have already seen the table laid out by their friends in the mainstream media.”

Love all of these fierce defenders of Life and Liberty! pic.twitter.com/CfQMIQ8YrE

Students for Life of America President Kristan Hawkins similarly characterized Barrett as “a judicial role model for the next generation, and our team will mobilize across the country for this qualified jurist who deserves to be heard.”

“For too long, activist judges have used the U.S. Constitution as a blank check, to be filled in on behalf of their pet causes,” Hawkins said. “Case in point: Roe v. Wade and Doe v. Bolton that created from nothing a ‘right’ to abortion and wiped out all abortion laws nationwide. That kind of judicial activism tears at the heart of the nation as people lose trust in the law when it can be made up as you go along. America needs jurists like Justice Antonin Scalia, who respect the law as written, and whom Judge Barrett clerked for before being confirmed to serve at the U.S. Court of Appeals.”

I also look forward to her confirmation hearing, where she’ll have the opportunity to demonstrate to the Judiciary Committee, the Senate & the American people that she’ll uphold the rule of law and interpret the Constitution according to its original meaning without fear or favor

Planned Parenthood director turned pro-life activist Abby Johnson (and 2020 RNC speaker) was “thrilled” with the nomination. “This is the moment that the pro-life movement and those who hold all life to be dear and treasured have been waiting for,” she said. “This is the fight we are more than prepared to win. And this is a movement led in large part by strong, faithful women, just like Amy Coney Barrett, who have fought hard to get to where they are now. It’s our time.”

Tony Perkins, President of the Family Reseach Council, said that Trump once again “is following through on his promise and has selected a nominee who has a proven, originalist track record. Judge Amy Barrett is a highly qualified nominee who is committed to the Constitution and understands that a judge’s role is not to legislate from the bench.”

“Thanks to President Trump, we now have the opportunity after many decades to finally return lawmaking back to the legislatures that are elected by the people,” Perkins pointed out. “The Left, failing to win in the court of public opinion and in legislatures, has increasingly relied on the courts to rewrite laws to suit their purposes. However, the reality is sinking in among Senate Democrats that the era of legislating from the Supreme Court bench may soon be over. That’s why the president’s judicial nominees face smears and attacks on their faith.”

Terry Schilling of the American Principles Project, a conservative think tank, focused on the fact that Barrett “would bring a perspective to the Court which is currently absent. She would be the only current justice who did not attend either Harvard or Yale Law School, and her educational background puts her closer to the average American than the insular Ivy League circles which have for so long dominated the high court. In addition, Judge Barrett would also replace Justice Ginsburg as the only mother on the Court, ensuring that the working moms our country depends so much on continue to have a voice there.”

Conservative women, who support Judge Amy Coney Barrett’s nomination to the Supreme Court, pray while touching the doors of the Court as Jacquelyn Booth cries on the ground, mourning the death of Justice Ruth Bader Ginsburg. pic.twitter.com/5uTjnklLVP