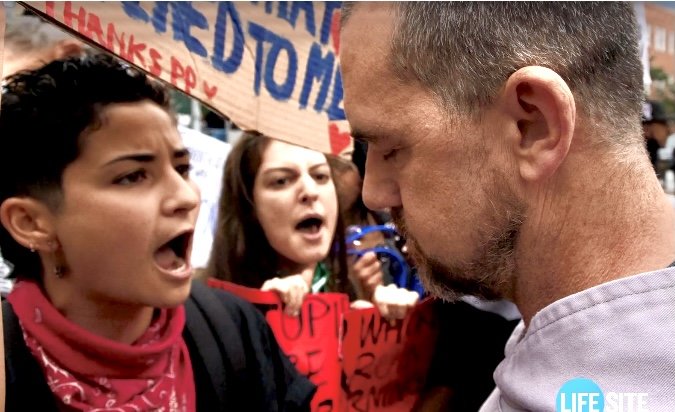 Pro-lifers were confronted by pro-abortion protesters in Brooklyn, New York.Rumble

BROOKLYN, New York, July 22, 2021 (LifeSiteNews) – During a Witness for Life Rosary procession in New York earlier this month, pro-abortion protesters attempted to block pro-lifers as they processed from a Catholic Church to a Planned Parenthood abortion center.

Beginning this year, pro-lifers have been gathering at St. Paul’s Church in Brooklyn every second Saturday of the month to defend the unborn. They begin at 8 a.m. with Mass, followed by the Rosary procession to the local Planned Parenthood facility seven blocks away.

On Saturday, July 10, about 80 pro-lifers were met by protesters from the group New York City for Abortion Rights (NYCFAR). The abortion activists gathered outside the church and screamed pro-murder chants throughout the Mass. This is the second time in which NYCFAR organized a counterprotest, disrupting the June 12 procession as well.

Despite police presence, it took two hours to traverse the seven blocks to the abortion clinic. LifeSite interviewed participants, including veteran pro-life activist and Red Rose Rescuer Father Fidelis Moscinski, the leader of Witness for Life in Manhattan.

Father Moscinski said, “It was a beautiful, but challenging time of prayer, intercession, especially as we were standing at the Planned Parenthood and processing there praying for the women who were going in, and also for this group that was obstructing us today.”

“Jesus said, ‘Blessed are those who are persecuted for the kingdom of heaven, for the sake of justice,’ and in a sense, we experienced some taste of that today,” he continued. “We were blessed even though we were reviled and spoken evil of by that group.”

“The Lord sent us on this mission to give testimony to our faith in Him and to the sanctity of life. I can’t help but think that if there were Catholics in every city in this country, in all the churches, were gathering in prayer and then in procession to the abortion clinics, abortion would end very quickly in our country,” he added.

Another veteran pro-lifer, Joan Andrews Bell, said she was grateful to “be here at a killing center here in Brooklyn, just to love the little babies. It may be the only love that they will know on this earth before they go back to God.”

She also said she desired “to love and pray for [the] moms and dads [of aborted babies] that they have a great conversion, and we can enjoy them all in paradise someday.”

After the event, Bishop Nicholas DiMarzio of the Diocese of Brooklyn told CNA, “One of our guaranteed rights in this nation is the freedom of speech, which allows us the opportunity to engage in respectful debate and make our beliefs known.”

“May we pray for peace and tolerance within our society, as we continue to encourage decisions that promote the sanctity of human life,” he continued.