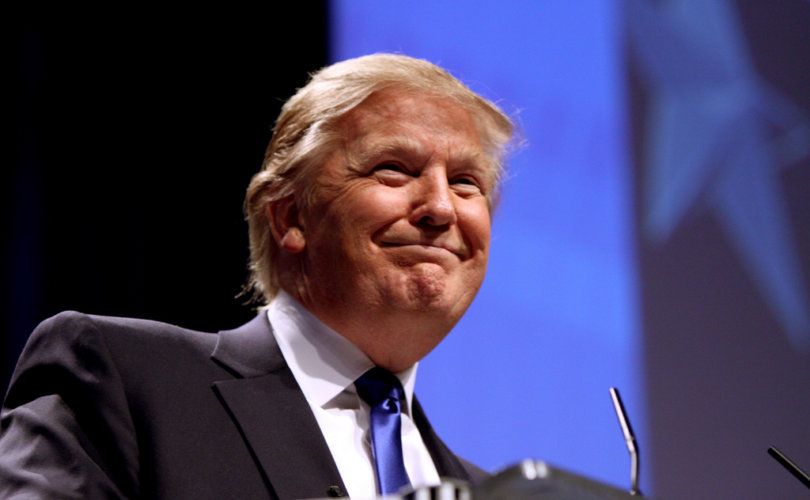 WASHINGTON, D.C., November 9, 2016 (LifeSiteNews) – Republican Donald Trump’s historic victory over Democrat Hillary Clinton in the 2016 presidential election was amplified by pro-life victories in down-the-ballot races, with pro-life Susan B. Anthony List saying it was the pro-life vote that propelled Trump and the U.S. Senate candidates to victory.

“This is an historic moment for the pro-life movement,” SBA List President Marjorie Dannenfelser said in a statement.

“Both the presidential race and the control of the Senate came down to tens of thousands of votes in Florida, Ohio, and North Carolina,” she said. “Donald Trump and pro-life Senate candidates won in every state where SBA List engaged.”

With a comfortable majority expected to be maintained in the House and roughly a dozen vulnerable Senate seats, the preeminent pro-life lobbying and education group had identified those battleground states as “critical to electing a pro-life president and maintaining a pro-life majority” in the Senate this time around, and put forth groundbreaking effort to connect with voters in each.

In the weeks before the election, SBA List reached out personally to 1.6 million pro-life voters, including 1.1 million voters directly in their homes in the battleground states of Florida, North Carolina, Ohio, and Missouri.

“Tonight that decision was validated by the victory of Donald Trump and all of our pro-life Senate candidates,” Dannenfelser said.

The focus was on turning out inconsistent pro-life voters but also included identifying and educating persuadable Democrats, which included Hispanics, about Clinton’s support for forcing taxpayers to fund late-term abortion up until the moment of birth.

The race between Florida Republican Senator Marco Rubio and Democrat Patrick Murphy was called early in the evening, with Rubio winning a second term 52 percent to 44 percent.

SBA List knocked on more than 500,000 doors in Florida to help the senator, and the group said, “Senator Rubio has been a staunch ally to the pro-life movement.”

At the beginning of the election cycle, Rubio opted to not run for re-election to the Senate in order to focus on his own run for the presidency. After Rubio lost the nomination, his colleagues encouraged him to reconsider and run for re-election to the Senate, and he decided to jump back in. SBA List attributes his decision in part to helping Republicans hold on to a pro-life Senate majority.

The group says Rubio is one of the best communicators of the pro-life issue, and he was unafraid to expose the extreme abortion views of his opponent, Murphy, who supports late-term abortion and taxpayer-funded abortions and had the endorsement of Planned Parenthood. Rubio articulated his pro-life conviction as well during his presidential bid.

SBA List said Portman was “no shoo-in for re-election,” with polls showing Strickland leading early on, but Portman ran a textbook campaign and gained a double-digit lead going into Election Day. The pro-life group had 173 canvassers visit 138,169 homes in Ohio.

SBA List Communications Director Mallory Quigley told Cleveland.com, “We found that [going door-to-door] is the most effective way to turn votes. When you have people talking to their neighbors about the importance of voting pro-life, it makes much stronger of an impact than just seeing a TV ad or seeing a radio ad.”

Portman does have a good pro-life voting record, but he lost some conservative pro-life support in 2012 after he changed his position to support gay “marriage.”

Strickland, also a former Ohio congressman, has said he strongly supports legal abortion and that he supports Planned Parenthood.

McCrory’s standing firm behind HB2, the state’s bathroom bill, garnered him and the state hostile backlash, and the case is being watched for its religious freedom implications nationwide. The governor’s race is so close that it won’t be called until November 18.

Burr won his bid for re-election against Ross 51 percent to 45 percent.

Burr is “a longtime ally of the pro-life movement who has consistently voted to protect unborn children and their mothers,” Dannenfelser said, and he has the endorsement of SBA List.

Ross, a former executive director of the American Civil Liberties Union of North Carolina and North Carolina legislator, supports government funding of Planned Parenthood and repeal of the Hyde Amendment.

The Indiana Right to Life Political Action Committee (PAC) endorsed Holcomb. Gregg, who reportedly opposes abortion, has said he would veto any abortion restrictions that reach his desk as governor.

Between Bayh and Young, Bayh was favored to win. Bayh voted to pass Obamacare and has pledged to support continued government funding of abortion, while Young is pro-life, acknowledges that life begins at conception, and advocates for adoption. SBA List said the race was crucial for keeping the Senate’s pro-life majority.

Blunt ran against a strong candidate in Kander. According to SBA List, Kander ran as a moderate. He voted against a late-term abortion ban while in the Missouri legislature and had Planned Parenthood’s endorsement.

Blunt has been “a staunch pro-life senator,” the pro-life group said, with a 100 percent pro-life voting record.

He joined Republican Iowa Senator Joni Ernst as top signatories in in a July 2015 letter from 50 U.S. senators to HHS Secretary Sylvia Mathews Burwell inquiring into Planned Parenthood's practices and whether they are in compliance with federal laws pertaining to the use of fetal tissue and partial-birth abortion. Blunt also authored the 2012 Respect for Rights of Conscience Act in an effort to roll back the HHS Contraceptive Mandate.

The race was also another one vital to the pro-life Senate majority, making Blunt a top priority for SBA List.

The contest between Pennsylvania Republican Senator Pat Toomey and Katie McGinty was tight and finished the same way, with Toomey winning over McGinty 49 percent to 47 percent.

The race was the most expensive Senate contest in history. Some reports estimated the cost at $118 million and others as $160 million, with money pouring in from outside groups vying for control of the Senate.

“He has been a solid supporter of life during his time in the Senate,” the SBA List live election blog said, “with a 100 percent pro-life voting record.”

Toomey is pro-life, though he has said he supports abortion exceptions for rape, incest or the life of the mother.

Republicans had hoped to flip the seat to their side, and both parties poured money into the race, according to Fox News, making it one of the most expensive contests in the country.

The New Hampshire race between Republican Senator Kelly Ayotte and Democrat Maggie Hassan stayed close throughout the campaign and past Election Night, with 84 percent of the state’s precincts reporting in the early morning hours that pro-life Ayotte trailed by .2 percent.

One of the few Republican to vote against defunding Planned Parenthood lost his Senate seat to another pro-abortion candidate Tuesday night.

In what was essentially a wash for the pro-life movement, Illinois Senator Mark Kirk lost 55 percent to 40 percent to State Representative Tammy Duckworth, a Democrat and Iraq War veteran.

Duckworth was endorsed by NARAL Pro-Choice America as a “relentless advocate for Americans’ reproductive freedom.” NARAL gave her a 100 percent pro-abortion rating, and she fought government defunding of Planned Parenthood.

Feingold, who was a senator from 1993 to 2011, had the endorsement of Planned Parenthood Action, which had also touted him as a “champion for reproductive health care.” He voted to expand U.S.-funded abortion abroad.

“Sen. Johnson has a 100 percent pro-life voting record during his time in the Senate,” SBA List wrote on its live election blog. “This race was a crucial win to keeping a pro-life majority in the Senate. Congratulations to Sen. Johnson!”