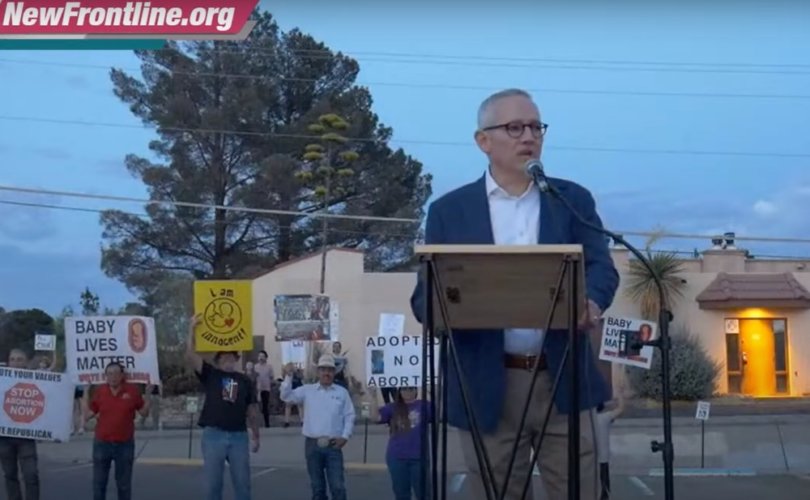 Southwest Coalition for Life had organized the “emergency” rally to “welcome” the new abortion facility after it was announced that the former owner of Jackson Women’s Health Organization abortion clinic in Mississippi would shutter the Mississippi location and open a new facility in New Mexico.

READ: Mississippi abortuary at center of Dobbs case is sold after being forced to stop abortions

Diane Derzi, the clinic’s former owner, told the AP that the Jackson location would never reopen but that its equipment and furniture would be transported to a new location in Las Cruces, New Mexico.

On Tuesday, hundreds of pro-lifers, including major leaders in the movement to defend the unborn, gathered outside the intended location of the new abortion facility.

“Our nation has taken a huge leap forward with the overturn of Roe,” Southwest Coalition for Life CEO Mark Cavaliere told the crowd, according to a press release shared with LifeSiteNews.

Headed by pro-abortion Democratic Gov. Michelle Lujan Grisham, New Mexico is slated to broaden access to abortion even as other states curtail it.

Cavaliere told pro-lifers assembled Tuesday that the new abortion clinic in Las Cruces “has become the epicenter of post-Roe America,” since the landmark case that overturned Roe v. Wade centered on the abortion facility that has since moved to Las Cruces.

During the speech, Cavaliere also emphasized that pro-lifers must work both to protect the unborn and lift up women, and made a crucial announcement.

According to the press release, Cavaliere told pro-lifers his organization had successfully leased the building just next door to the abortion facility so that “before they’ve even opened … A new women’s pro-life, pro-woman Guiding Star health care center will open right here.”

Southwest Coalition for Life noted in its Wednesday press release that the Guiding Star health center, separated by a driveway from the upcoming abortion facility, “will provide women with fertility care, pregnancy and childbirth, lactation, and family life services.”

Some people have asked if @StudentsforLife‘s work is done now that Roe is reversed.

NO. There are still states — like New Mexico — where abortion is committed on demand, for any reason, through ALL 9 MONTHS of pregnancy.

We won’t stop until that does.https://t.co/1FWDJ46wud

Tuesday’s rally, which drew pro-lifers from across the country and was held in the searing July heat exceeding 100 degrees, was emceed by David Bereit, founder and former CEO of 40 Days for Life.

The event featured an impressive lineup of speakers, who each offered unique insights into the new challenges confronting the pro-life movement in post-Roe America.

One of the speakers was Father Alejandro Reyes, rector at the Cathedral of the Immaculate Heart of Mary in the Roman Catholic Diocese of Las Cruces.

Reyes opened the rally with a prayer, and shared that his own father had pressured his mother to abort him. Thanks to his mother’s decision to choose life, Reyes said he serves as “a voice to the voiceless, the unborn children at risk of abortion.”

— Article continues below Petition —
PETITION: Call on Biden to condemn violent pro-abortion rioters across America!
Show Petition Text
21350 have signed the petition.
Let's get to 22500!
Thank you for signing this petition!
Add your signature:
Show Petition Text

Leah Jacobson, founder and CEO of the National Guiding Star Project, was also in attendance. Jacobson told pro-lifers that the Las Cruces women’s health center will be the first to open immediately next door to an abortion facility, and emphasized the need to help mothers in addition to saving babies.

“If we love life, if we want to protect women and children, we need to understand that there is something fundamentally broken about how we are treating motherhood in our culture,” she said, calling on pro-lifers to lead the charge to “take the needs of women into consideration”.

According to Project Defending Life executive director Dominique Davis, who came from Albuquerque to attend the rally, pro-life centers like the new Guiding Star center outnumber abortion facilities three to one in New Mexico.

Grisham has vowed to protect the ability of women in her state to kill their unborn babies.

On Tuesday, she tweeted a reminder that “abortion remains legal and safe in New Mexico,” promising “we won’t go back.”

New Mexicans understand the right to make personal decisions about one’s own reproductive health care – and we won’t go back.

However, pro-lifers in New Mexico have vowed to not stop fighting to protect the unborn.

“If ever there was a place to respond to a challenge like we’re facing, it’s Las Cruces, the City of the Crosses,” Cavaliere said during his speech. “We’ve seen what God can do. If ever there was a people to rise up and say that women deserve better that abortion and we’re going to be the ones to give them better – it’s the people here.”