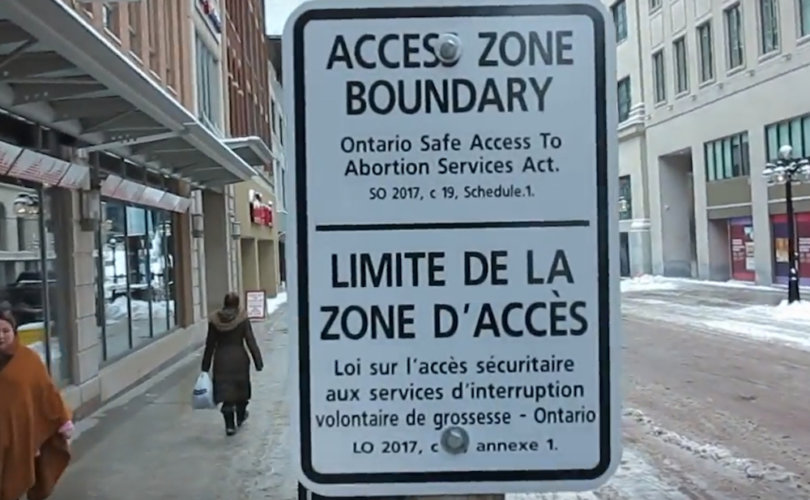 Individuals convicted of a first offence under Bill 163 can be fined up to $5,000 and/or jailed up to six months. These punishments double for a second and subsequent convictions.

While Twitter lit up with laudatory messages to Attorney General Yasir Naqvi for constraining “crazy anti-abortion protestors,” Campaign Life Coalition urged pro-life advocates not to abandon mothers and children threatened by abortion in the face of this “totalitarian” bill.

“We must remember that although this law infringes upon our rights and freedoms, the real victims here continue to be the pre-born children, their moms, and families,” Campaign Life said in a January 31 advisory on the bill. “Women need to hear our message of truth and support. We must not abandon them!”

The Ottawa protest was “very peaceful, enough to show a resistance to this government that we were not going to take this bubble zone demarcation lying down,” Johanne Brownrigg, CLC Ottawa political lobbyist, told LifeSiteNews.

Abortion #bubblezone street signs are now up in Ottawa. Now everyone will know that children before birth are killed within this zone #onpoli #ProLife #FreeSpeech pic.twitter.com/F7RKbPobh7

Attorney General Naqvi tabled the Safe Access to Abortion Services Act on October 4, 2017, and it passed three weeks later when all three major parties agreed to fast-track it. MPP Jack MacLaren of the Trillium Party cast the sole vote against it.

Naqvi, who is also MP for Ottawa Center, brought in the bill at the request of Ottawa Mayor Jim Watson. He in turn had been lobbied by staff of the Morgentaler abortion facility and Planned Parenthood Ottawa, who repeatedly accused pro-life witnesses of harassing and intimidating women outside the abortion center.

One allegation Naqvi has repeated, as have the media, is that a pro-life protester reportedly spat on a woman.

But longtime pro-life advocate and former RCMP security and intelligence officer Frank Barrett says that is not true. “The spitting business was all made up. There was no evidence, no proof, no arrests,” he told LifeSiteNews in an earlier interview.

However, on at least one occasion, a young man entered the Ottawa abortion facility and sprinkled holy water around, Barrett said.

Moreover, Ottawa police reports obtained by pro-life blogger Patricia Maloney show no reported injuries and no charges laid from 2010 to 2017 as a result of police attendance at the Morgentaler abortion facility.

However, Naqvi, who held a press conference with Mayor Watson on Thursday to announce the Bill 163 had come into effect, retweeted several messages, thanking him and reinforcing the Liberal narrative. That included one from “Ladies Who Lunch Ottawa” describing pro-lifers as “crazy.”

And from Planned Parenthood Ottawa:

#SafeAccessZones law came into effect today. Thank you @Yasir_Naqvi, @cmckenney and activists who worked to make this law a reality. https://t.co/llvxkq0FGg

#Abortion Bubble Zone Protest in downtown Ottawa: There is no evidence that women seeking abortion are threatened or harmed despite what out Attorney General claims. #RepealBill163 #freedomofspeech pic.twitter.com/7wTIcCwBBc

“We have documented cases of Canadian women who have changed their minds about having an abortion after speaking to pro-lifers and taking their literature during peaceful demonstrations,” she told the rally.

“This is proof that the pro-life information is desired and appreciated by many women entering these facilities. They need to know there are other options,” Duval added.

“Campaign Life Coalition calls on upon Kathleen Wynne and the Ontario liberal government to repeal Bill 163,” she said.

The Liberal “bubble zone” law is “an unacceptable assault on rights and freedoms.”

Here is the full text of Campaign Life Coalition’s advisory for pro-life advocates, which urges them to action, including contacting MPPs:

The totalitarian bubble-zone law is in force as of today, February 1, 2018. Here are five things you should know and do:

1  All eight private abortion facilities in Ontario have an automatic 50 metre bubble-zone . The following activities within these zones will be illegal (see the list here). We encourage you to continue your peaceful pro-life outreach, but when you do, please observe the law and stand outside of the bubble-zone.

2 Unlike the private abortion facilities, hospitals and pharmacies will have to apply for a bubble-zone. Applications for bubble zones opened today, which means it might still take some time before these locations get a bubble-zone. If you are a prayer vigil organizer or you regularly witness to life, contact your local police authorities to discuss the bubble-zone. If possible, meet with the staff sergeant at the abortion facility, hospital, pharmacy etc. where you plan to witness to life and have them show you the exact boundaries of the bubble-zone.

3 Inform your family, friends, and faith communities about this bubble-zone law and encourage them to join you in speaking out against it. A quick and easy way to do this is by contacting your MPP today. Find your elected official by clicking here.

4 Don’t be discouraged. Look for new, creative ways to continue getting the pro-life message out there. We must remember that although this law infringes upon our rights and freedoms, the real victims here continue to be the pre-born children, their moms, and families. Women need to hear our message of truth and support. We must not abandon them!

5 Pray. Pray. Pray. Continue to pray for an end to abortion in our nation. Ultimately, this is God’s battle, and He has already won. But in the meantime, let’s get to work!