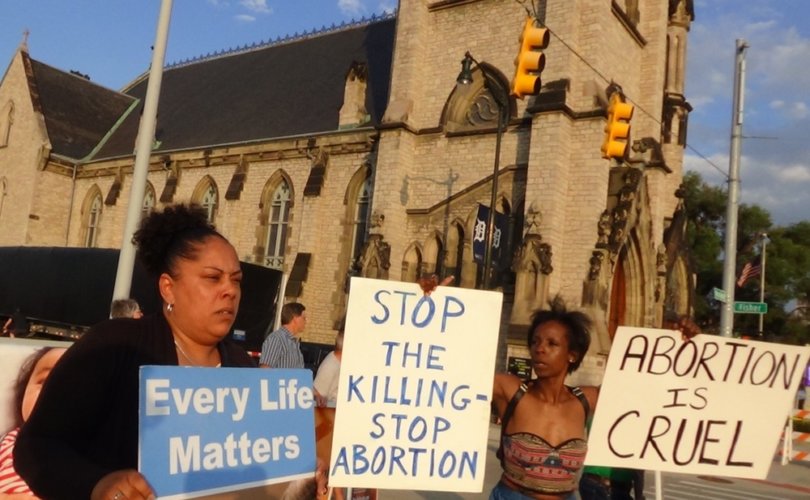 DETROIT, Michigan, August 1, 2019 (LifeSiteNews) – As Democratic presidential contenders sparred over a slew of progressive issues, pro-life “abolitionists” were on the street calling on them to show mercy for the unborn and confronting passersby with images of abortion victims.

Dr. Monico Migliorino Miller of Citizens for a Pro-Life Society and a group of her supporters protested outside of Detroit’s famed Fox Theater. In an interview on the scene with LifeSiteNews, Miller, who is also a Red Rose Rescue movement leader, said that she wants to see the abolition of abortion.

Abortion is “cruel and heartless,” she said. “You wouldn’t do it to a dog.” Standing near the steps of St. John’s Episcopal church on Woodward Avenue and what was once known as Piety Hill, Miller told LifeSiteNews: “Women don’t regret having babies; they regret having abortions.”

One of the female pro-life advocates wore a t-shirt that declared: “I regret my two abortions.”

Pro-life leader handcuffed by police: ‘We are now evaluating our legal options’

According to a press release from the pro-life group Created Equal, which also protested outside both the Tuesday and Wednesday night debates, “In the name of ‘safety,’ our rights were routinely violated several times by law enforcement eventually culminating in the handcuffing of Created Equal President Mark Harrington.”

“By threat of arrest police compelled us to be penned up in nowhere land while more liberal protesters were permitted to express themselves undeterred. False accusations of trespass, disorderly conduct, and violating a legal order, among other equally spurious allegations, were used to bully us into submission,” said Harrington. “We are now evaluating our legal options in response to this blatant infringement of our First Amendment rights.”

Woodward Avenue, which had been cordoned off on one end at Fisher Service Drive and at another nearby intersection, was closed to media and pro-life advocates. However, police opened it for the leftist marchers. Beating drums and shouting slogans, some of the protesters chanted, “Their bodies, their choice!” as they marched past the pro-life advocates.

A young male protester held up a placard immediately in front of a pro-life advocate in an apparent attempt to conceal her pro-life poster and message. A young female protester joined in, shouting pro-abortion slogans and also trying to cover up the pro-life messages.

A female marcher approached one of the pro-life advocates on the sidewalk of the Woodward Avenue bridge that crosses the I-75 freeway. LifeSiteNews witnessed her holding up her placard and attempting to cover a pro-life sign. Police later approached the pro-life advocates, telling them that the woman had complained that she had been assaulted. Other witnesses on hand told LifeSiteNews that there was no assault.

Miller told LifeSiteNews that pro-lifers were present outside the debate venue to show that the unborn are “human beings, members of the human family.” She said she was saddened that all of the Democratic presidential candidates at the debate adhere to a “completely radical, extremist pro-abortion platform.” Miller said that her group wants to expose the truth about the Democratic party. Pointing to the large posters bearing photographs of dismembered, aborted babies, Miller said that the images allow them to “speak the truth about what happened to them.” She added: “This is the only way for them to speak.”

Miller accepted being labeled an “abolitionist,” saying that she wants to “abolish legalized abortion, and do all we can to help mothers who are in need.” She added that her group provides an array of aid to pregnant women – food, baby items, automobiles, and even homes.

During the Wednesday evening debate with fellow Democrats, Biden defended himself from Sen. Kamala Harris, who asked: “Why did it take so long, when you were running for president, to change your position on the Hyde Amendment?”

Biden reversed his previous support for the Hyde Amendment, which is a measure that bars the use of federal funds for most abortions. In early June, less than 48 hours after his staff confirmed that the former vice-president indeed still supported the Hyde Amendment, Biden told a gala in Georgia: “If I believe healthcare is a right, as I do, I can no longer support an amendment that makes that right dependent on someone's zip code.”

Addressing the fact that Biden is a fellow Catholic, Miller, a theology professor, said in response: “There is absolutely no way that he can be genuinely Catholic or truly believing in what the Church teaches on the sanctity of life, and hold the position that he holds. It’s impossible. He is morally incoherent.”

Biden, in addition to serving in arguably the most pro-abortion administration in American history, has also officiated same-sex “weddings.”