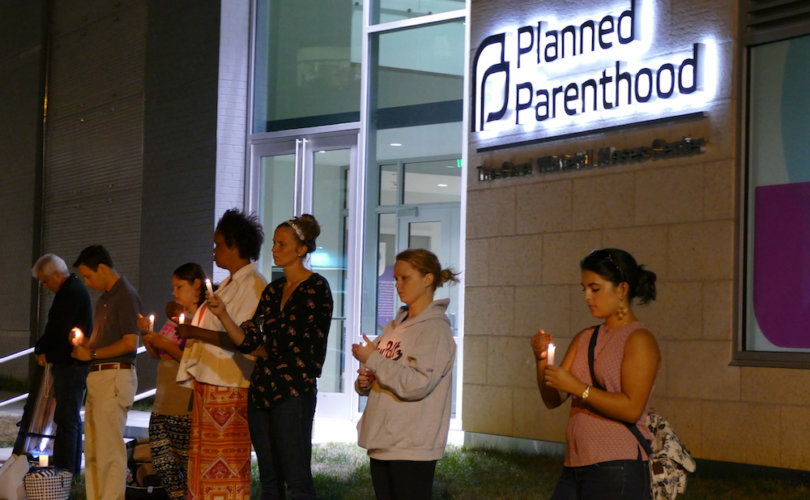 WASHINGTON, D.C., September 27, 2016 (LifeSiteNews) — Several dozen pro-life activists, some holding images of women killed by legal abortion, greeted buses of Planned Parenthood supporters at both entrances to a fundraising event celebrating the abortion chain’s new mega-facility in Northeast Washington. Before walking several blocks from the abortion facility to the gala site, activists prayed and protested as donors visited the new “flagship” center for a VIP reception.

“We have to be here for a number of reasons,” Rev. Patrick Mahoney of Church on the Hill DC, the Christian Defense Coalition, and Abortion-Free DC told LifeSiteNews. “One, to stand in solidarity with our brothers and sisters who are going to be brutalized here. … We’re here to be a voice for them. We’re here to offer women hope and support and encouragement.”

The majority of the reception and $350 per plate gala attendees LifeSiteNews saw were well over 60. The crowd of pro-life protestors included Catholic University of America students and many young professionals.

The new Planned Parenthood of Metropolitan Washington is located next to and across the street from Two Rivers Public Charter School. Named the Carol Moses Whitehead Center, it was originally supposed to open at the end of 2015. Its construction site has already been home to two 40 Days for Life campaigns, protests that have drawn hundreds, and a rosary procession hosted by the Archdiocese of Washington.

Last month, a DC Planned Parenthood contractor told a group of pro-life protestors “I like” the Ku Klux Klan and that he would have no problem installing plumbing for an extermination camp.

Mahoney said the witness of pro-lifers was important to educate the dignitaries and donors present about Planned Parenthood’s abortion-center business model.

“If you really care for women, why don’t you give your money to some of the 13,000 federally-licensed clinics that provide comprehensive care?” Mahoney asked. “Planned Parenthood does less than 1 percent of pap smears in America, less than 2 percent of the mammograms, they don’t provide prenatal [care], they don’t provide comprehensive care. So give your money to clinics that really care about women … Planned Parenthood is the largest abortion provider in the world. This is a way for us to tell them that.”

Students for Life of America held their “What Has Roe Done For Us” display to educate gala attendees about the harm legal abortion has done to women like Cree Erwin and Karnamaya Mongar. The latter died from a botched abortion at the hands of late-term abortionist Kermit Gosnell.

On Sunday night, pro-life activists held a candlelight vigil outside the abortion center that takes up roughly half a street block.

Mahoney told the candlelight vigil participants that the candles represented the “light of the world,” which pro-lifers are called to be. He said the prayer vigil, during which participants prayed the Litany of Mary and other Christian prayers, was the pro-life movement’s own way of “consecrating” the abortion center before its grand opening.

“It’s disgusting to celebrate child killing especially when they wine and dine on expensive food while mothers and children are in downtown DC homeless, and they’re fighting for their lives, going hungry each night,” local pro-life activist Lauren Handy told LifeSiteNews. “Not only do we need to be a witness, we need to be a strong witness [and] we need to move from outrage to action.”

“Last week, I talked with a clinic worker — so a woman who actually works for Planned Parenthood — and I showed her a picture of an abortion victim, and she didn’t know Planned Parenthood did abortions and she quit on the spot and did not come back,” Handy said.

Another protestor, Father Stephen Imbarrato of Priests for Life, told LifeSiteNews that the opening of Planned Parenthood’s mega-facility is “a really great example of the direction our country’s going in.”

“I think it really behooves all of us to really look inside our hearts [and] come to a sense of repentance, because all of us can do more to end pre-born child killing in this country,” he said.

40 Days for Life’s UNITED bus will visit the DC Planned Parenthood on Wednesday at 1:45 p.m. as its national tour’s first vigil stop.

“Coming out here tonight, I saw a lot of pain and a lot of hurt of the people going in,” Handy said. “We really have to remember to come to them in a place of humility and forgiveness ourselves … we were there at one point, or some of us are still even there, and God is deeper still.”