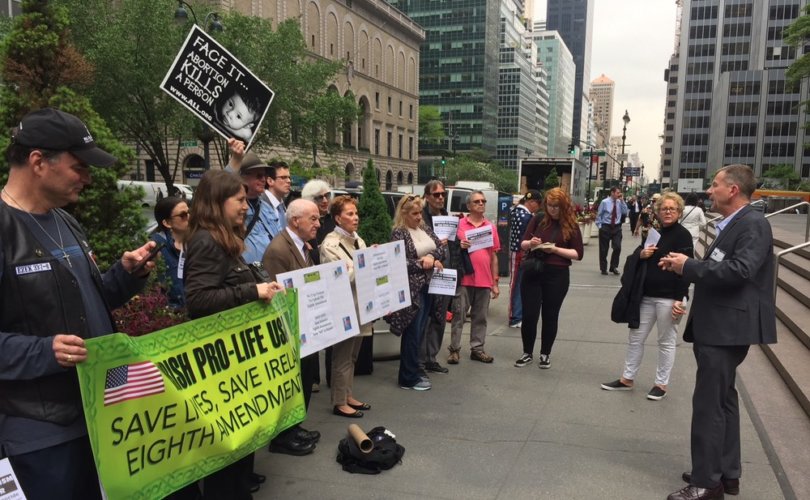 NEW YORK, May 18, 2018 (LifeSiteNews) — American pro-lifers of Irish descent rallied at the Irish Consulate in New York City on Monday to show support for Ireland’s 8th Amendment protecting preborn babies from abortion. Another group of pro-lifers rallied in Boston at the same time.

The gathering of around 20 people in New York was spearheaded by the group Irish Pro-Life USA, and followed a meeting between five members of the group, Irish Consul General Ciaran Madden, and Deputy Consul General Anna McGillicuddy. Their purpose was to raise awareness of the May 25 referendum attempting to repeal the amendment, and to convey to the Irish government Irish Americans’ support for life.

“As Irish citizens and friends of Ireland abroad, we urge the people of Ireland to vote no to the repeal of the Eighth Amendment in the referendum on May 25 in Ireland,” the group said in a statement after the meeting. “The Irish and our friends in America have seen the horrible destruction of legalized abortion nationwide, especially since the 1973 Roe v Wade decision by the Supreme Court, which has resulted in well over 54 million abortions nationwide.”

After the demonstration, pro-life advocate Hugh O’Lunney hosted a reception for the pro-lifers at his Times Square pub. At the reception, Irish Pro-Life USA founder John Aidan Byrne warned that repealing the 8th Amendment would lead to “abortion on demand, just like what you have in New York.”

Repeal supporters have already prepared legislation legalizing abortion in the first trimester, subject to a 72-hour waiting period, to push through if they win. Later-term abortions would ostensibly be limited to risks to a mother’s life or health, or fatal fetal abnormalities, but pro-lifers warn that those exceptions are a pretense for much larger loopholes.

“Is that what Ireland really wants or needs?” Byrne asked. “We don’t think so.”

More supporters of Ireland's 8th Amendment joined up for a great large gathering, calling for NO to Repeal, at Hugh O'Lunney's Times Square Pub where crowd was updated on meeting earlier with Consul General of Ireland by Irish pro-lifers @ExpatsForLife @lifeinstitute @LdnIrishU4L pic.twitter.com/qfim39pBpn

Also supporting the demonstration was the group Americans United for Life. AUL chief legal officer Steven Aden told Breitbart News that Ireland currently has “one of the lowest maternal mortality rates in the developed world,” but legalizing abortion would “change that and put at risk mothers and babies.” He cited AUL’s Unsafe report documenting poor health standards and medical misconduct at abortion facilities in 32 states, which have left multiple women dead or injured, to demonstrate the threat to which repeal would subject Ireland.

Both sides have been highly active in mobilizing support, and polls have indicated the final vote will be close. Recent polling shows narrow majority support for repeal, but Dr. Ruth Cullen of the pro-life LoveBoth campaign takes its “significant slide in support for the Government’s proposal” as a sign the Irish people are realizing the proposal is “more extreme than they ever anticipated it would be.”

“We all know people at home, family and friends, and we can use our voices to educate them about the horror of abortion over here and how that shouldn’t be a reality in Ireland too,” Byrne said of Irish Americans’ efforts. “With God’s grace, Irish people will vote no to abortion on demand.”