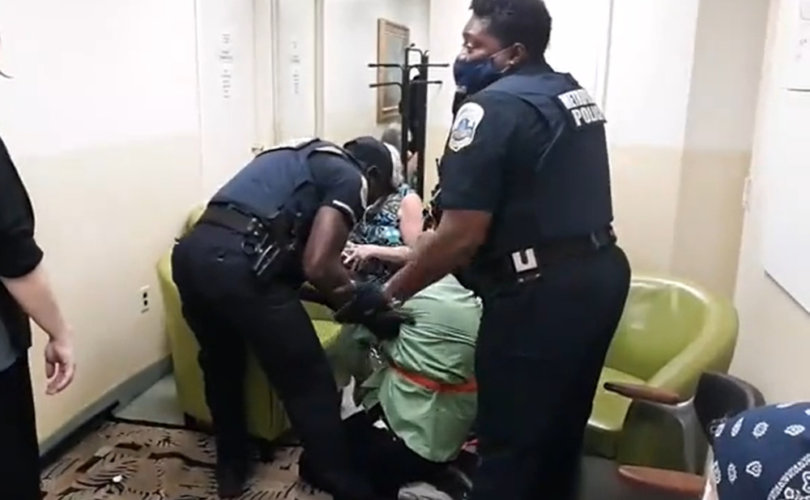 Arrests are made during the rescue at Washington Surgi-Clinic on October 22, 2020DC Area Anti-Abortion Advocacy / Facebook

WASHINGTON D.C., (LifeSiteNews) – Joe Biden’s Department of Justice and the FBI have raided, arrested, and charged the legendary Joan Andrews Bell and eight other pro-lifers with “conspiracy against rights” and “FACE Act offenses” after they conducted a “traditional rescue” at a prominent D.C. abortion mill in October 2020.

The Department of Justice wrote on March 30 that Assistant Attorney General Kristen Clarke from the DOJ’s Civil Rights Division, along with U.S. Attorney Matthew M. Graves for the District of Columbia, had announced “a two-count indictment charging” nine pro-lifers “with federal civil rights offenses in connection with an alleged reproductive healthcare clinic invasion in Washington, D.C., on Oct. 22, 2020.”

The charges in the indictment are “conspiracy against rights and a FACE Act offense,” which could see each of the nine pro-lifers face up to 11 years in prison, three years of supervised release, and a fine of up to $350,000.

On October 22, 2020 nine pro-lifers entered the Washington Surgi-Center, a D.C. abortion clinic located at 2112 F Street, an abortion center infamous for offering late, second trimester abortions. The pro-lifers were there to stage a “traditional rescue,” not a Red Rose Rescue, to reach out to women who were scheduled for abortion and to defend unborn children scheduled to be killed at the clinic owned by abortionist Cesare F. Santangelo, who has a history of medical malpractice.

Once inside, the rescuers sought to offer help to families who were seeking abortion, counselling them to change their minds about aborting their babies, praying with them, and informing them about local resource centers. Rescuers blocked the abortion facility’s entrances and stationed themselves around the complex to physically prevent access to the building.

Lauren Handy, who organized the rescue, told LifeSiteNews at the time that “we are no longer having a debate with evil but confronting it head on — today we are using our bodies as shields to protect our pre-born siblings from abortion.”

Nine were arrested, were initially charged with a D.C. trespass ordinance, and were waiting for an initial court appearance to be scheduled until they were rounded up on March 30.

The DOJ further claims that “Handy, Smith, Harlow, Marshall, Hinshaw, Idoni, Goodman, and Bell forcefully entered the clinic and set about blockading two clinic doors using their bodies, furniture, chains, and ropes.” The indictment alleges that the pro-lifers violated the FACE Act by using a physical obstruction to injure, intimidate, and interfere with the clinic’s employees and a patient, because they were providing or obtaining reproductive health services.

Unknown to the nine defendants, who were not given court dates or notices to appear, the Department of Justice convened a grand jury to review the charges, swearing the jury in February 15, and filing their indictment March 24.

Dr. Monica Miller, the director of Citizens for a Pro-Life Society and leader of Red Rose Rescue, told LifeSiteNews that “as a consequence, warrants were immediately issued and eight of the nine pro-lifers were literally rounded up in an FBI raid of their homes and places of work.”

Will Goodman was not located by the FBI agents but intends to surrender himself to the federal authorities. Miller told LifeSiteNews that Heather Idoni’s passport was confiscated by the federal authorities – “meaning she will most likely be prevented from participating in a mission trip she had already planned to help refugees in Ukraine and from supporting her Ukrainian adopted son who lives in the war-ravaged country.”

‘Hunted down by FBI agents’

Miller noted that “this is the first time any of them are facing federal charges. That the rescuers were hunted down by FBI agents is unprecedented in the history of pro-life activism.”

Most of the pro-lifers have now been released from federal custody and are now awaiting hearings.

Commenting on the arrest, Lauren Handy stated: “Media reports have stated that we ‘invaded’ the abortion center and ‘disrupted’ women from exercising their ‘reproductive rights’. No, that is not what we did.”

“We entered the clinic and sought to love the women who were already there for their abortion procedures,” Handy said. “We tried to offer them help so they would choose life. We non-violently defended the unborn who were about to be exterminated – the innocent, the most vulnerable, killed in horrific acts of violence and treated as so much trash.”

Handy added how “it is not surprising that the Department of Justice is bringing these charges against us – as this is the age of the pro-death Biden administration.”

“We ask Jesus to give us the grace to continue our witness to the unwanted unborn – and to face these unjust charges bravely and in peace,” she said.

Unsurprisingly, Dr. Laura Meyers, president and chief executive of Planned Parenthood of Metropolitan Washington, D.C. welcomed the FBI’s raid, saying “we are deeply grateful that the Justice Department took decisive action against those who, for far too long, have sought to intimidate and menace our patients and staff.”