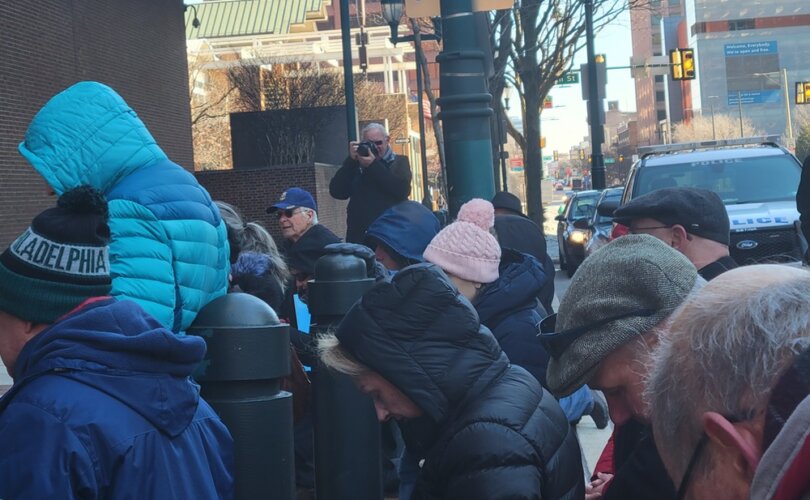 Houck was arrested by heavily-armed FBI agents last year after he allegedly pushed an abortion clinic “escort” who his attorneys say had been verbally harassing his young son using vulgar language. He now faces two felony charges for allegedly violating the Freedom of Access to Clinic Entrances Act (FACE) Act, which his legal team argues doesn’t even apply in his case.

READ: Mark Houck heads to trial in one of the biggest pro-life cases of the century

Pro-Life Coalition of Pennsylvania spokeswoman Ashley Garecht told LifeSiteNews that an estimated 50 pro-life activists attended the Tuesday rally, which was MC’d by Pastor Bill Devlin and held between 11 a.m. and 12 p.m. in front of the U.S. Courthouse in Philadelphia, Pennsylvania at 6th and Market Street.

Garecht herself spoke at the event, observing that while the landmark reversal of Roe v. Wade in June 2022 was a major victory for the pro-life movement, it was immediately followed by “a wave of darkness” that “rose up,” immediately throwing advocates for the unborn into “a new chapter in the fight for life, liberty, and justice.”

In video footage shared with LifeSiteNews, the coalition spokeswoman noted that while some states have immediately moved to protect the preborn following the rollback of Roe, other states have moved in the opposite direction — meanwhile U.S. President Joe Biden, a self-professed Catholic, “calls pro-lifers extreme, dangerous, and out-of-touch.”

“We thank God for the ability to save babies through the efforts of courageous sidewalk counselors. We are appalled that the FBI and the DOJ have been weaponized into machines of harassment and intimidation to silence pro-lifer warriors like Mark Houck,” she said.

In a Tuesday email statement, Garecht explained that the Biden administration’s Justice Department is acting “with malevolent intent in its selective prosecution” of Houck.

“More than 100 crisis pregnancy centers across the country, including Philadelphia’s own Hope Pregnancy Center, have been vandalized and attacked, without a single FBI arrest or DOJ indictment of any suspects. And yet Mark Houck is now on trial after defending his son from a known, aggressive Planned Parenthood escort,” she said.

“This unequal treatment under the law must end and we are encouraged by Congressman Jim Jordan’s official creation of the Select Subcommittee on Weaponization of the Federal Government to investigate Mark’s prosecution and others like it,” Garecht told LifeSite.

LifeSiteNews previously reported that the GOP majority in the U.S. House of Representatives resolved earlier this month to create a “Weaponization of Government” Select Committee to investigate alleged instances of FBI and other federal intelligence agencies’ meddling in domestic politics.

The committee is slated to consider 11 instances of alleged politicization of the FBI and the DOJ, including and the use of the FACE Act to arrest pro-lifers like Mark Houck and Paul Vaughn.

In comments to LifeSite, Garecht added that her pro-life coalition is “deeply grateful for the overwhelming support shown for Mark and his family by so many in the pro-life community of Pennsylvania and throughout the country.”

She said that supporters in every state in the U.S. have sent donations to help the Houck family, and that her group knows “that people all around the world are praying for Mark’s complete acquittal.”

“We wait in prayerful anticipation for precisely that verdict,” she said.

Houck’s trial begins this week and is set to be one of the most significant pro-life legal battles of the century.

The pro-life Catholic husband and father of seven faces two felony charges of violating the FACE Act, which could lead to up to 11 years in prison and fines totaling as much as $350,000. He has been ordered to surrender or refrain from obtaining a passport or firearms as a condition of his release on $10,000 bail.

— Article continues below Petition —
Stand with Mark Houck, a pro-life Catholic dad of 7 raided by Joe Biden's FBI
Show Petition Text
7988 have signed the petition.
Let's get to 9000!
Thank you for signing this petition!
Add your signature:
Show Petition Text

According to an update provided by the conservative legal group on Tuesday, the jury will be sworn in on Wednesday at 9:30 a.m. and the trial will begin.

“The judge says he expects all testimony to be finished by the end of the day Thursday (1.26.23) and, perhaps, closing arguments, too,” Thomas More Society executive vice President and general counsel Andrew Bath said.

“This was a sidewalk squabble that has turned into a federal case. It should have ended in the state courts, which threw this matter out, but unfortunately the Biden Department of Justice has decided to take an intimidation tack against pro-life people and people of faith,” Breen said in a statement.

LifeSite is closely watching the case and will provide updates as they come in. Readers are also encouraged to visit the Thomas More Society website for up-to-date developments.