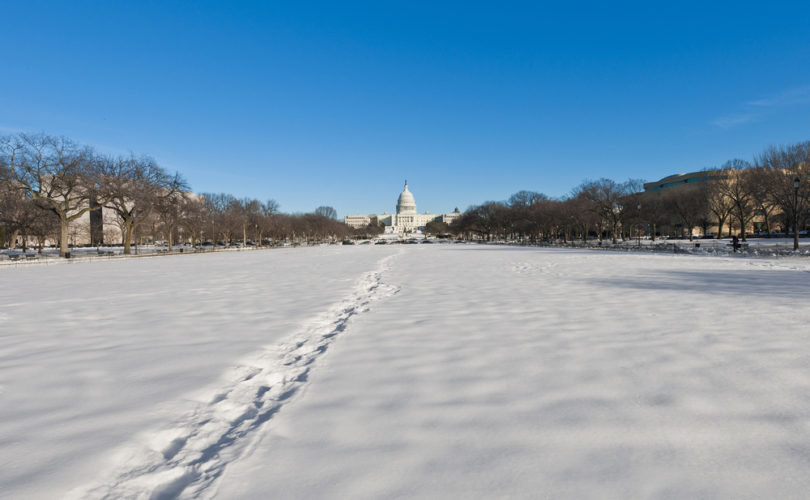 WASHINGTON, D.C., January 25, 2016 (LifeSiteNews) – The 2016 March for Life traced its annual route to the Supreme Court last Friday afternoon, but for some, the March has not yet ended.

An unknown number of pro-life advocates remain snow-bound in the nation's capital three days after the 43rd annual human rights event wrapped up.

A winter storm of Biblical proportions dumped two feet of snow inside the Beltway, and an additional foot outside the city limits, just as tens of thousands of 2016 March for Life participants tried to go back home.

Some stayed on in Washington. Some left early. And some found themselves trapped inside their vehicles, as blowing and drifting snow made the roads impassable for days.

One student who spent two nights sleeping on a bus on the Pennsylvania Turnpike told LifeSiteNews their “little sufferings were nothing compared to the tremendous sufferings of the unborn who undergo the pains of abortion.”

Others found themselves strangely unconcerned after rescheduling their hotel checkout, day after day.

“I had to miss the March for Life two years ago due to bad weather, so I was determined to attend this year no matter what,” Natasha Tax, a 21-year-old student at Temple University, told LifeSiteNews. Although she had to spend a few extra days in the city, she felt that “getting to participate in the March for Life was absolutely worth the sacrifice.”

“I would do it all over again without a question,” she said.

Some were even grateful for the change to spend more time with other right to life advocates, whom they rarely meet in person.

“It is perhaps the most blessed March I've ever participated in, and it is my 36th,” he told LifeSiteNews.

One of his fellow pilgrims, Pat Tuttle, said, “Without this blizzard I know I would probably never have had a chance to network with so many like-minded people.”

The feeling was shared by pro-life leaders, as Abby Johnson of And Then There Were None said on Sunday that she was “so thankful for this unexpected retreat!”

Not everyone chose to stay; some left early. Sometimes pro-life members disagreed, with some staying and others leaving.

Dr. Michael New, a professor of economics at Ave Maria University in Florida, told LifeSiteNews that some of the students at his university realized they would never beat the storm if they stayed for the march.

“Ave Maria students did their own 'mini march,' walking the route of the actual March for Life and praying for an end to abortion,” he said. “On Friday morning, the buses left D.C. for Ave Maria.” Still, about 15 Ave Maria students – most of whom had families in the Washington area – stayed behind, and Dr. New marched together with them behind the “Ave Maria Students For Life” banner on Friday.

He said he spent Saturday following the exploits of the “March for Life pilgrims who were stuck on the PA Turnpike” – people like Andrea Moury.

Then on Sunday, he ran into a contingent of students from the University of Alabama, Bama Students for Life. “I had not taught any of the current students, but I was able to tell them stories about the history of the group,” Dr. New said, adding that he and the students compared notes about coordinating pro-life conferences and finding internships.

That meeting would never have happened without the intervention of Winter Storm Jonas.

“My extended stay was not what I had planned, but it deepened friendships and was certainly a burden worth bearing,” Dr. New told LifeSiteNews.

In a testimony to the power of pro-life fellowship, many of those who left wished they had been snowed in, so they would have the opportunity to experience it.

One of those was Dr. Jacqueline C. Harvey, Ph.D., a faculty member at Tarleton State University who also works with the Euthanasia Prevention Coalition USA. In order to see her students, she had to leave before the March.

“I have been attending almost every March for Life since graduate school in 2003, Dr. Harvey told LifeSiteNews, “and this was the first time I couldn't march, because I wouldn't make it back now to teach my Monday classes.”

Her flight on Saturday was canceled by Friday morning, so she had to take a Friday afternoon flight – at six times the price.

“I would have loved to have been snowed in with my fellow activists,” Dr. Harvey told LifeSiteNews. “I respect those who could stay and stuck it out, but for many who were supervising buses of schoolchildren in their care, the pro-life thing was to be wise and cautious.”

Still, attendees' prevailing attitude is best summed up by Tori Long, who blogs as the “Pink-Haired Papist,” and stayed in D.C. until Monday.

“I have exactly zero regrets about going,” she said.