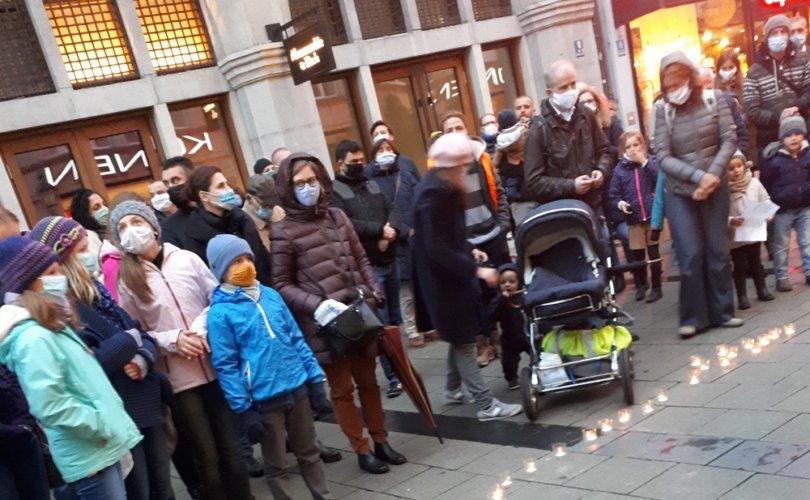 MUNICH, Germany, September 29, 2020 (LifeSiteNews) – The local government of Munich, Germany, refrained from lighting up city hall in purple in support of “International Safe Abortion Day” after backlash from pro-lifers and Catholics, the Archdiocese of Munich and Freising, and higher levels of government.

Between 300 and 400 pro-lifers had gathered just a few hundred meters from city hall on Monday, singing and praying.

Three speakers criticized the government of Munich for its willingness to engage in pro-abortion advocacy. “We must not leave the arena in Munich to the other side,” one of the speakers said. “We have to go out and show our faces, standing up for life.”

Another speaker pointed out how health is priced so highly by the government that the participants in the event were all wearing masks to stop the spread of COVID-19, whereas at the same time unborn babies are killed during abortion procedures every single day.

Official statistics from recent years show roughly 100,000 abortions per year in Germany. Meanwhile, as of today, less than 10,000 people who were tested positive for the coronavirus have died since March.

Silja Fichtner, one of the participants in the pro-life event, told LifeSiteNews that it was “a great, successful event. I was surprised that so many people (more than 300) followed the invitation, which was extended only last Thursday.”

In fact, the organizers didn’t employ any formal advertising beforehand but relied mainly on word of mouth, as well as emails and WhatsApp chats.

“The fact that so many people gathered on a cool rainy Monday evening, despite having to wear masks, shows that this action of the mayor of Munich has hit a sore spot,” Fichtner explained. “The people don’t want a culture of death, nor abortions without punishment, but help and mercy for pregnant women, real solidarity and charity.”

The pro-abortion World Health Organization, which is affiliated with the United Nations, described the “International Safe Abortion Day” as “a timely reminder that access to legal and safe abortion is fundamental to every person’s right to attain the highest standard of sexual and reproductive health,” especially during the coronavirus crisis.

In Munich, specifically, the local government wanted to support removing §218 of the German Criminal Code, which states, “Whoever terminates a pregnancy incurs a penalty of imprisonment for a term not exceeding three years or a fine.”

While abortion is technically a crime, this paragraph in the code is generally not enforced if “the pregnant woman requests the termination of pregnancy and demonstrates to the physician by producing the certificate … that she obtained counselling at least three days prior to the procedure, … the termination is performed by a physician and … no more than 12 weeks have elapsed since conception.”

Other exceptions from treating abortion as a crime are if “the termination is medically necessary to avert a danger to the life of or the danger of grave impairment to the pregnant woman’s physical or mental health and if the danger cannot be averted in another manner which is reasonable for her to accept,” as well as cases of rape.

“The pregnant woman does not incur the penalty specified in section 218 if the termination was performed by a physician after counselling … and no more than 22 weeks have elapsed since conception,” the German Criminal Code continues.

The Archdiocese of Munich and Freising issued a statement just a few hours before city hall was supposed to be lit up in purple. Additionally, the archdiocese had sent a letter to the mayor a few days earlier.

“In their letter to the Lord Mayor, the representatives of the archdiocese had made it clear that the deletion of §218 of the German Criminal Code would be contrary to the Christian conception of man and Christian ethics,” the statement summarized.

“The Catholic Church is committed to a comprehensive protection of life, the letter stated: Human life, from the moment of conception until death, represents a unity that is beyond the control of others. The Church has a special obligation to stand up for the weakest, especially for unborn life.”

The local government of Upper Bavaria, a region in Bavaria, prohibited lighting up Munich city hall at the last minute, after it had first only recommended refraining from doing so.

Wolfgang Rupp, a spokesman for the government of Upper Bavaria, explained that supporting the “International Safe Abortion Day” would be an inadmissible expression of opinion, reported the German Catholic News Agency (KNA). He added that city hall’s action would not have been “in accordance with the requirement of objectivity applicable to all sovereign acts,” instead unduly influencing the forming of opinions among citizens.