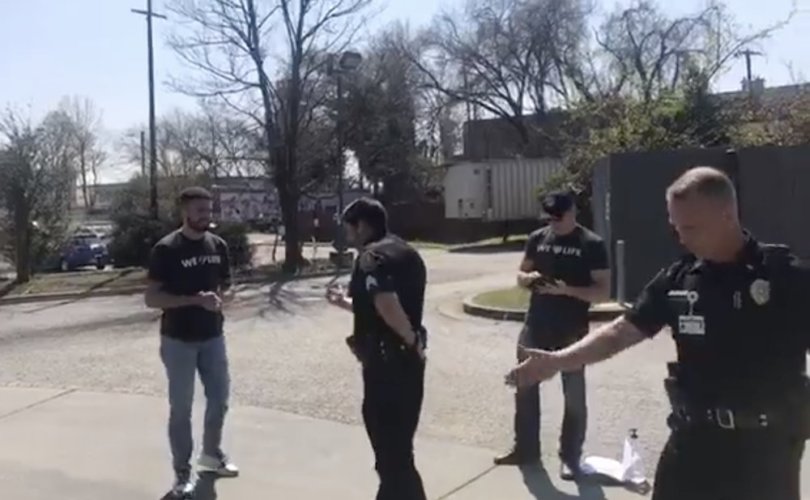 GREENSBORO, North Carolina, April 3, 2020 (LifeSiteNews) – Four pro-lifers involved with North Carolina-based Love Life are suing the local government of Greensboro for violating the group’s First Amendment rights to walk and pray on the sidewalk outside an abortion center.

On Saturday, March 28, four of Love Life’s activists were arrested by police for allegedly violating a local “stay at home” order in place during the COVID-19 pandemic by praying at abortion center A Woman’s Choice.

On Monday, March 30, another seven members of the pro-life group were arrested in the same location.

“Greensboro Police Officers made every attempt to gain voluntary compliance before charging seven individuals with violation of the Guilford County Stay at Home Order and Resist Delay and Obstruct a Public Officer,” a police press release claimed.

Sign a petition in support of these pro-lifers here.

Guilford County, where Greensboro is located, had first issued a “stay-at-home” order on March 23, which was amended on March 30. In it, outdoor activities were permitted, including, “by way of example and without limitation, walking, hiking, golfing, running, cycling, or using the greenways.”

At the same time, residents had to comply with so-called social distancing requirements.

The four plaintiffs in the complaint filed on April 2 are not the same as the pro-life activists arrested earlier. Nevertheless, Paul Nisley, Josiah Chavez, pastor David Troyer, and his daughter Jolene Troyer, are part of Love Life.

Filed by the Thomas More Society, the lawsuit describes the plaintiffs as “individuals who pray,  engage in expressive activity, and otherwise exercise their First Amendment rights on the public sidewalks and rights of way outside the abortion clinic in Greensboro and elsewhere.”

Like other activists involved with Love Life, they “walk and pray outside abortion clinics because doing so presents a visible demonstration of their deeply held religious conviction that innocent lives are being ended inside and that there exists an urgent need to intercede both for the unborn children and for the confused and hurting mothers who often feel they have no other choice but to abort.”

“Plaintiffs’ walking and praying also serves as a silent witness against those going into the clinic as well as a message to passersby of their intercession for these babies and their mothers,” the complaint added.

“Due to the threats and the arrests made by the Greensboro Police Department” to pro-lifers on Saturday and Monday, “Plaintiffs are fearful of exercising their constitutionally protected rights and are therefore reluctant and disinclined to return to the area of the Greensboro abortion facility to walk and/or pray for fear of arrest and being charged with a crime.”

The Love Life activists pointed out that the “stay-at-home” order, as enforced by police in Greensboro, “inflicts irreparable injury on the First and Fourteenth Amendment rights,” imposing “an unconstitutional restriction on constitutionally protected speech in traditional public fora.”

They also called the enforcement of the order “discriminatory as applied because they prohibit Plaintiffs from engaging in speech and other expressive activities in traditional public fora based solely upon the pro-life content and viewpoint of their speech.”

The complaint asked the court to take action and restrain the local government from violating the pro-lifers’ “constitutionally protected speech and expressive activities” outside the abortion center.

Greensboro mayor Nancy Vaughan, who is named as one of the defendants in the complaint, told Triad City Beat that she has not yet studied the document.

“We are living in difficult times with a worldwide health pandemic,” she said.

“We are trying to balance the health and well-being of our entire community, and observe constitutionally protected rights,” Vaughan claimed. “It is a countywide stay-at-home order asking people to restrict travel, not speech.”

In Michigan, a pro-life activist who allegedly violated a lockdown order protesting at an abortion facility has filed a similar lawsuit.