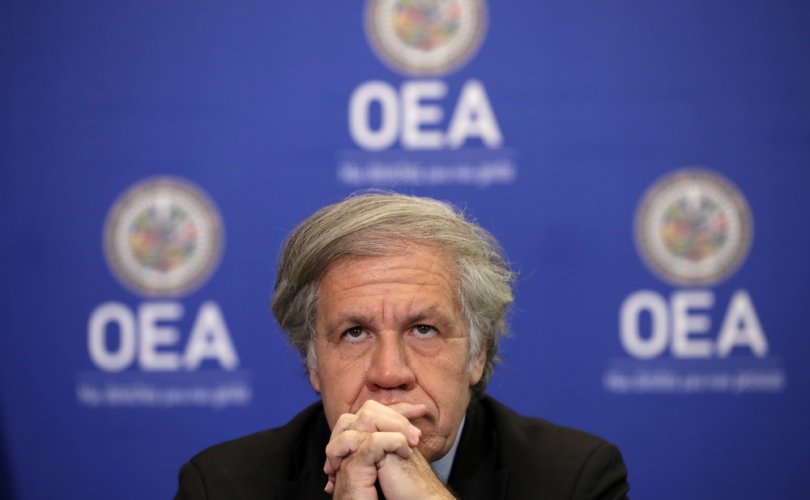 Almagro is running for a second term.

“[t]he application of the fullest validity of Article 4 of the American Convention [of Human Rights, which states that ‘[t]his right shall be protected by law and, in general, from the moment of conception’] is essential.”

Almagro also responded to the criticism by progressive groups that pro-life groups are “anti-rights” groups by saying that “no one can be considered ‘anti-rights’ within this organization. The dialogue has to be respectful and absolutely inclusive.”

Pro-life leaders also thanked the Trump administration for helping to clarify the Secretary General’s position on the issue.

A coalition of U.S. based pro-life groups wrote to U.S. Secretary of State Mike Pompeo last year requesting that the U.S. withdraw its support of Almagro’s re-election bid over concerns regarding comments Almagro made calling on countries in the region to legalize abortion.

The Trump administration responded swiftly by facilitating a dialogue between Secretary General Almagro and the coalition, in which the Secretary General explained the context of his previous statements and stated that it had not been his intention to say that there was a “right” to abortion or that member states should legalize it. In this sense, he said it would be improper for him to weigh in on the issue since it is an internal matter of member states.

“Mr. Almagro’s 180-degree turn on abortion is a testament to the administration’s efforts to prioritize the right to life in its foreign policy,” said Gualberto Garcia Jones, LifeSite’s Director of Advocacy. “From President Trump’s speech at the U.N., to Secretary Pompeo’s enforcement of the Siljander Amendment, and U.S. OAS Ambassador Carlos Trujillo’s leadership in Latin America, the Trump administration has shown how American leadership can influence the hemisphere.”

“We appreciate Secretary General Almagro’s remarks and we hope they are heard throughout the region and the world. He could not have been clearer: the right to life is a fundamental principle and right,” added Susan B. Anthony List President Marjorie Dannenfelser.