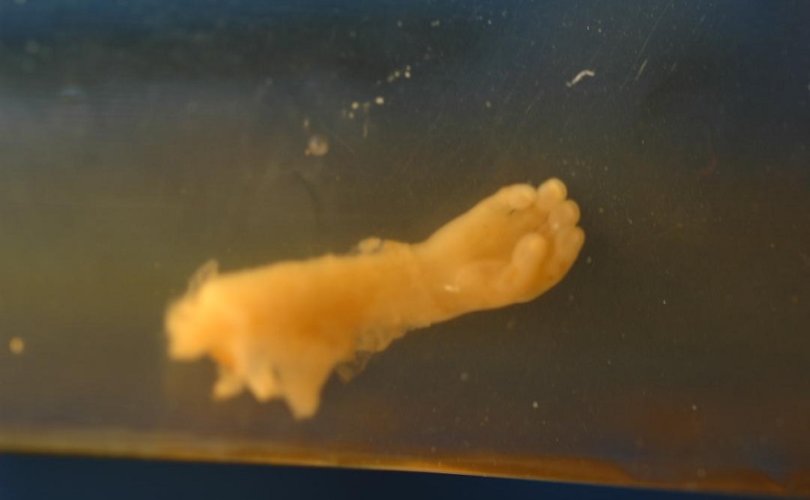 November 2, 2018 (LifeSiteNews) – In August 2018 the bodies of 15 unborn children, discovered in the trunk of Michigan abortionist Michael Roth's car by West Bloomfield police officers, were released by the Oakland County Medical Examiner's Office to the Borek-Jennings Funeral Home. This was the result of a two-year effort by Citizens for a Pro-Life Society to obtain the aborted babies' remains for burial. In the wake of Detroit funeral home scandals these 14 aborted babies will finally be laid to rest in a dignified service, Saturday, Nov. 3rd with an 11am funeral Mass celebrated by Auxiliary Bishop of the Archdiocese of Detroit Robert Fisher, Transfiguration Parish, 25225 Code Rd., Southfield, MI. Burial to follow at Holy Sepulchre Cemetery, 25800 W 10 Mile Rd, Southfield, MI.

A second funeral will take place for the 15th of the “Trunk Abortionist” babies as pro-lifers in Livingston County desired to bury one of the abortion victims in their area. That funeral is Nov. 24th, 11am Mass, Holy Spirit Parish,9565 Musch Rd, Brighton, MI. Burial will take place in parish cemetery.

In Sept. 2015 the remains of 15 aborted babies were discovered in the trunk of the car of Michigan abortionist Michael Roth by the West Bloomfield Police Department. Here's the story. Late in May 2014 Michael Roth lost his lease in the Novi, Michigan building where he ran an abortion clinic for over 20 years. Indeed, he may have lost his lease due to the activism of Lynn Mills of Pro-life Michigan who in February of that year organized a picket of Roth's abortion center and had even previously distributed to tenants in the building information regarding Roth's abortion practice. She explains: “Roth has a sad history of lawsuits, Attorney General violations, including doing at-home abortions in the 1990's, and sanctions placed on him by Licensing and Regulatory Affairs (LARA), the licensing arm of the State of Michigan.”

In the next few months Roth attempted to rent other office space to restart his abortion practice. Again activist Lynn Mills, through her investigative skills, was able to discover exactly where Roth intended to relocate. Twice she succeeded in influencing landlords not to rent to abortionist Roth. In the early Winter of 2015 Roth went on to rent office space in Farmington Hills, MI, but it appears his lease did not permit him to do abortions. Mills sent an assistant into the new office location. She tried to secure an abortion appointment and was told Roth was not offering abortions. He would eventually close up this office as well.

The Car Accident that Revealed a Terrible Secret

In Sept. 2015 Roth was involved in a car accident in his hometown of West Bloomfield where he struck and seriously injured a pedestrian on Orchard Lake Road. As a consequence, Roth's car was impounded by local law enforcement.

Roth asked the West Bloomfield police if he could retrieve his garage door remote control devices that were inside the impounded vehicle. The police accommodated his request. When they opened the car to locate the remotes they also discovered Roth was illegally in possession of medications. The Michigan Attorney General's own June 2016 press statement explains:

Local police found evidence of six prescriptions for Ciprofloxacin, a common antibiotic used with abortion procedures, which was allegedly written by Dr. Angel Ojeda, a doctor who runs the Eastland Women's Center in Eastpointe, Michigan. The clinic's primary focus is terminating pregnancies. Officers also found vials of Fentanyl, a drug commonly used as a sedative during termination procedures, as well as containers of post-conception material.

Medical records indicate that Roth sometimes worked out of Dr. Ojeda's clinic. Dr. Ojeda and the women whose names were listed on the prescriptions alleged they had no knowledge of the prescriptions. Dr. Ojeda also stated that a large amount of Fentanyl was stolen from his office in December 2014. When interviewed, Ojeda stated he had never given Roth permission to have Fentanyl or Ciprofloxacin from his clinic, a statement which was corroborated by a clinic employee. A separate medical assistant employed at the Eastland Women's Center allegedly admitted to stealing medical equipment and medications used in abortions from the clinic for Roth and that he was fully aware the materials were stolen.

A search warrant was completed on Roth's home and office. Additional vials of Fentanyl were found at the home. Both the Fentanyl found in the car and in the house were matched to the Fentanyl that was allegedly stolen from the women's clinic. The search warrant also revealed a large amount of cash with names and what is believed to be pregnancy information attached to each bundle of cash, medical materials such as syringes, disposable scalpels and empty containers similar to the ones filled with post-conception material found in Roth's car.

The Police Make a Shocking Discovery

Due to the discovery of the illegal medications, the West Bloomfield police conducted a thorough search of Roth's car. Upon opening the trunk they found something far more disturbing, even shocking, namely 15 plastic specimen jars each containing the remains of an aborted baby!

Due to Lynn Mills notifying landlords that they were about to have an abortionist for a tenant, Roth was an abortionist without a clinic and it appears that he simply began doing abortions in hotel rooms or even in the private homes of his female clients.

Citizens for a Pro-Life Society knew that the trunk abortionist babies were being held as evidence by the Oakland County Medical Examiner's Office and spent nearly two years in an effort to obtain them for the purposes of a humane burial. Finally, after dozens of phone calls made by CPLS director Monica Migliorino Miller and letters of request, the babies Roth aborted, found in the trunk of his car were given to our pro-life group.

In an initial analysis the Oakland County Medical Examiner found that the jars contain human tissue described as “remnants of performed medical procedures” and “products of conception”, but not fetuses, according to an Oct.14, 2017 WXTZ Channel 7 news report. Monica Migliorino Miller of Citizens for a Pro-Life Society states, however, “I don't know how carefully the medical examiner looked in those specimen jars – but they do contain real identifiable human remains. I looked in the jars. I saw the tiny bodies myself – their arms, legs, feet, spinal columns – all there. These are real human beings, they lived once, they were put to death, treated with total disrespect – and now these unwanted people will at least be given a humane and dignified burial. In the Christian religion there are seven corporal works of mercy. The last work of mercy is to bury the dead – but it will be the first work of mercy these unborn children will ever know on this earth.”

(The above photo is of the feet of one of the aborted babies found in trunk of Michael Roth's car. Photo taken by Monica Migliorino Miller.)

Oddly Roth was never charged with doing illegal abortions. Since Roth was a licensed physician the Assistant Attorney General handling the case lacked confidence that they would achieve a conviction regarding Roth's apparently doing abortions outside of a clinic setting.

Roth was finally convicted a year ago in November of 2017 on three counts of Larceny in a Building connected to the illegal possession of narcotics and was sentenced by Judge Marc Barron, 48th District Court, receiving a $798 fine and 18 months probation, plus the suspension of his medical license by the State of Michigan Medical Board.