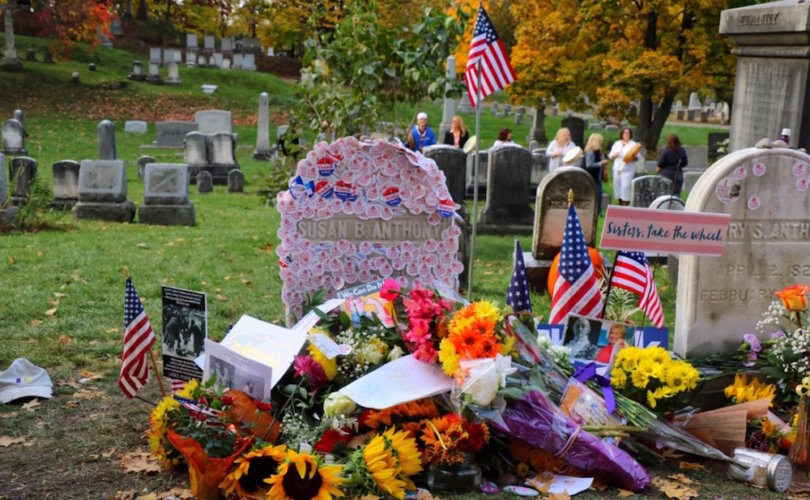 ROCHESTER, New York, November 8, 2016 (LifeSiteNews) — Mt. Hope Cemetery in Rochester has announced it will stay open late tonight so that voters can visit the grave of famous suffragette Susan B. Anthony as a way of honouring Hillary Clinton’s achievement as one of the first woman presidential candidates, along with Jill Stein for the Green Party.

But the pro-life organization Susan B. Anthony List says voting for Clinton dishonours Anthony, who was adamantly opposed to abortion, reports PJ Media.

“Susan B. Anthony and her compatriots knew that the rights of one group — women — could not be build up on the broken rights of another — their children,” SBA List President Marjorie Dannenfelser told PJ Media.

“A vote for Hillary Clinton, who has said pointedly that ‘the unborn person does not have constitutional rights,’ is not a vote that honors Susan B. Anthony,” stated Dannenfelser.

Clinton “stands with a small and extreme minority,” that pushes untrammelled rights for abortion, she said, adding that Clinton has vowed to overturn the Hyde Amendment, which would allow Medicaid funding for abortion, a position opposed by nearly two-thirds of Americans according to a Politico-Harvard poll.

Anthony and many of her fellow suffragettes “opposed abortion and saw it as an abuse and exploitation of women,” noted Dannenfelser.

Dems putting “I Voted” stickers on Susan B. Anthony's tombstone. They know Susan B. was very pro-life and probably wouldn't have voted HRC?

On Nov. 8, 1872, Anthony and 14 other women were arrested after illegally casting ballots in the presidential election. Women were granted the vote in 1920.

The “I Voted” stickers had by mid-day almost obscured her tombstone, while hundreds of people lined up to to pay their respects, reported the New York Times.