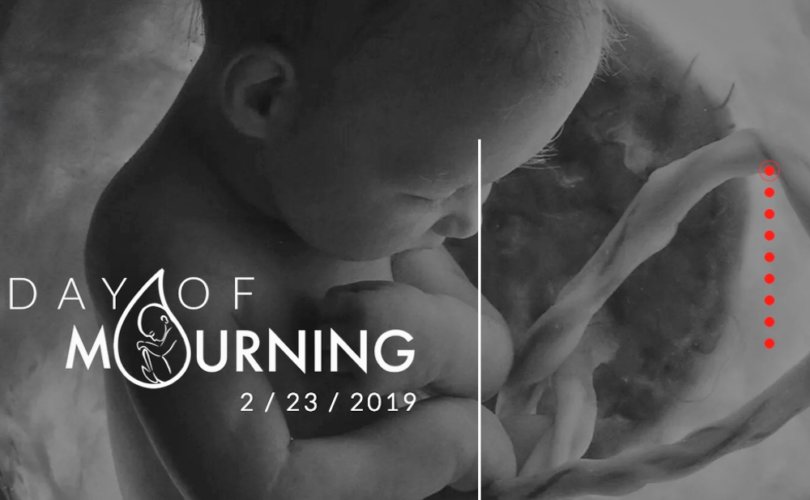 ALBANY, February 22, 2019 (LifeSiteNews) – New York’s enactment late January of a law declaring a “fundamental right” to abortion helped spark a national conversation about the extremes of abortion-on-demand, and pro-life activists have organized an event tomorrow to help keep awareness of where it all began.

Late last month, New York enacted a law codifying a “right” to abortion into the third trimester, erasing the state’s recognition of preborn babies as potential homicide victims, removing abortion from the penal code entirely, and allowing licensed health practitioners other than full doctors to commit abortions. Democrats and activists cheered the law’s passage in the state capital, and Democrat Gov. Andrew Cuomo ordered the One World Trade Center’s spire be lit in pink to commemorate it.

In response, Saturday, February 23 will see a Day of Mourning because “We are in desperate need for God to move upon the hearts of young and old in our nation,” according to the event’s website. For one day, organizers are asking pro-lifers in New York and across the nation to wear black, abstain from shopping, close their businesses, and pray for repentance.

Speakers will include David and Jason Benham, a pair of identical twin brothers, ex-baseball players and former HGTV stars targeted by the Left for their conservative Christian views; Elizabeth Johnston, who runs the popular Activist Mommy blog on family and cultural issues; Justin Reeder, founder of the Love Life ministry in North Carolina; David J. Harris Jr., an author, speaker, and black conservative leader; worship leaders and musicians Phil King and Cody Ray Lee; and Blythe Mullen, an eight-year-old girl saved from abortion after her biological mother was told about adoption.

“We're holding a huge flagship rally that's already sold out, in Albany, New York, right in the epicenter of where Governor Cuomo signed and celebrated that outrageous, infanticide law,” Johnston told CBN News. “And we are owning this sin. Even as God's people, if you've never committed an abortion, there's a sense in which we have been completely complicit, completely silent, we have not been the Good Samaritan that we must be, and so we have to own this as God's people for allowing this bloodshed for 46 years.”

“The focus is New York state, we want the citizens of New York to express their displeasure with this thing and do more than just say, go to a March for Life rally or do more than give $5 to a pro-life lobbyist, but actually be involved in something that’s not just a pep rally,” Jon Speed, the bookstore owner who closed his store for a day to protest the law last month, told the Christian Post. Speed will also speak at the service.

CBN adds that events are scheduled in more than twenty cities across the U.S., including Dallas, Nashville, Charlotte, and Chicago.

The website also provides a petition to Cuomo urging him to reverse his support for the law, downloadable posters churches are encouraged to post advertising the event, and posters that businesses can put in their windows explaining they are closed because they “will not collect sales tax for a tyrannical government that murders babies. After today, we will continue to take sales tax under duress.”