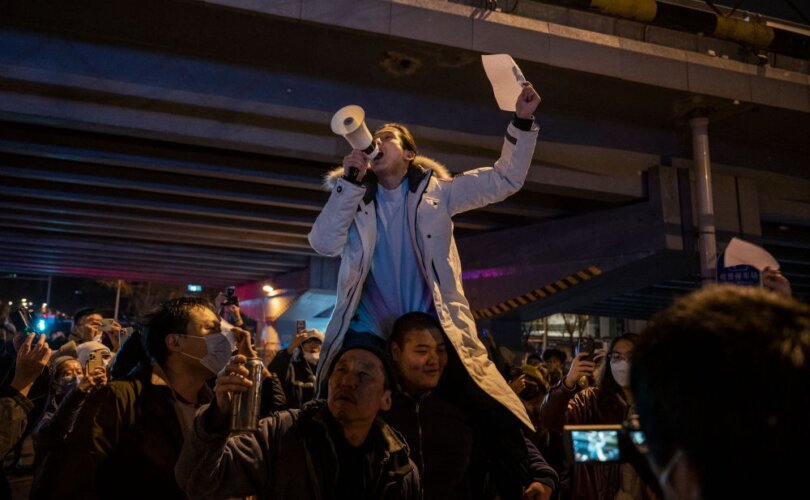 (LifeSiteNews) — Large-scale protests have reportedly broken out across China as citizens oppressed by nearly three years of COVID controls push back against the totalitarian Chinese Communist Party (CCP)’s brutal policies aimed at crushing the coronavirus at all costs.

Legacy media outlets have responded with support for the protesters, despite having condemned western protesters as “conspiracy theorists” engaging in “super-spreader” events.

According to media reports over the weekend, thousands of Chinese citizens upset by crippling lockdowns took to the streets in myriad cities, including Beijing and Shanghai, to voice their opposition to China’s ongoing COVID rules. Footage of the protests have gone viral on social media, and western media outlets have swiftly carried headlines spotlighting the gatherings.

Authorities now say they will ease restrictions after another mass test in China’s most populous city.pic.twitter.com/3VlV970kUo

Insider Paper characterized the protests as “a rare outpouring of public anger against the state” for its hardline “COVID zero” policies that have triggered “snap lockdowns, lengthy quarantines and mass testing campaigns.”

Protesters have reportedly called for CCP head Xi Jinping to step down after presiding over the country’s harsh mandates.

“I’m here because I love my country, but I don’t love my government … I want to be able to go out freely, but I can’t. Our COVID-19 policy is a game and is not based on science or reality,” one protester said, according to German outlet Deutsche Welle.

Writing in response to the news reports of citizen uprisings against COVID lockdowns, attorney and author Michael Senger remarked in a Substack post republished by the Brownstone Institute that anti-establishment protests in China are frequently exaggerated by western media outlets.

However, he said that despite the general potential for exaggeration, the CCP’s COVID lockdowns have been brutal by any standard.

“[D]uring China’s lockdowns, most residents haven’t been allowed outside their homes even to get food,” Senger said. “Meal deliveries are frequently inadequate and rotten and medical care is often inaccessible.”

“Infants are separated from their parents,” he said. “Pets are killed.”

Protests that have reportedly cropped up over the weekend against the reimposition of lockdowns have been met with a massive show of force by police, as well as online censorship.

Left-wing legacy media outlets in the west that had backed COVID lockdowns and mandates appear to have performed an about-face in response to the wave of anti-lockdown protests in China, Senger noted.

On Monday, CNN reported that citizens “have defied Chinese authorities to protest at universities and on the streets of major cities, demanding to be freed not only from incessant Covid tests and lockdowns, but strict censorship and the Communist Party’s tightening grip over all aspects of life.”

Axios highlighted the fact that young Chinese protesters resisting the country’s “harsh COVID-19 restrictions” are holding up blank pieces of paper to demonstrate “everything we want to say but cannot say” due to the CCP’s totalitarian censorship.

The reports come after widespread anti-lockdown protests in western countries were treated largely with contempt by legacy media outlets, with pundits frequently characterizing the rallies as “super-spreader” events attended by “extremists” and “conspiracy theorists.”

Media outlets have treated China’s zero-COVID policy differently, however, for reasons Senger says may have to do with “the establishment’s pretense of hawkishness and the consistent media narrative that during the response to Covid, at least we didn’t have it as bad as those poor Chinese who had to experience a ‘real lockdown.’”

However, Senger remarked that it was “[o]ur own media elites and health officials” who “advocated these insane Zero Covid lockdown policies and urged us to emulate them”.

Senger cited outlets like Salon and The Washington Post, which had held up China’s COVID response as a model for western countries and quoted public health “experts” like CDC director Rochelle Walensky, who had underscored the alleged public health benefits China “achieve[d]” by virtue of its “really strict lockdowns.”

According to Senger, resistance to the advice of lockdown-promoting officials and pundits is the only reason people in western countries like the U.S. aren’t currently struggling under the same draconian controls as communist-controlled China.

“As protests continue to erupt across China and Zero Covid is lai[d] bare as the moral and intellectual catastrophe that i[t] always was, it’s worth remembering that if we’d taken these officials and media elites seriously, the entire free world would look very much like China does today,” he said.