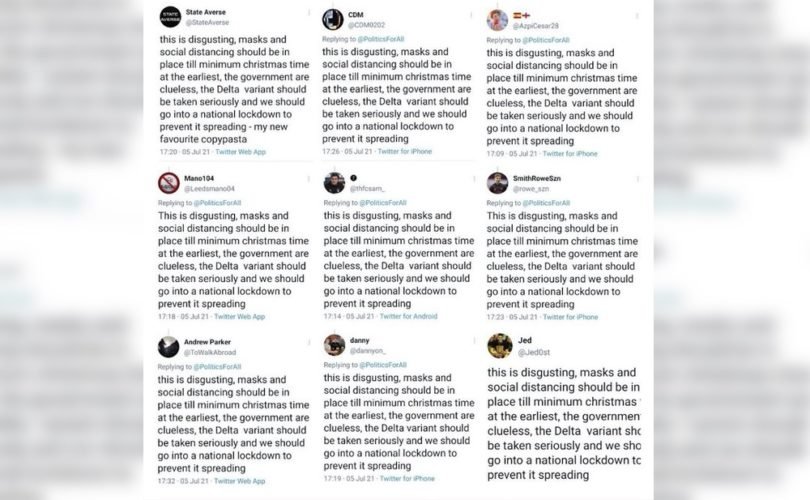 Social media users and reporters raised the possibility that a Twitter bot campaign has been launched to push back against the planned easing of restrictions in the United Kingdom. A bot campaign refers to automated accounts being programmed to push a single message or idea.

A LifeSiteNews review of many of the accounts tweeting the same message showed that many did not have photos of real people and instead used avatars or other photos commonly associated with bot accounts.

Jordan Lancaster, a reporter for The Daily Caller, tweeted images from suspected bot accounts and wrote that she was “highly concerned that there seems to be a bot army advocating to lock us in our houses forever.”

idk about you guys but i’m highly concerned that there seems to be a bot army advocating to lock us in our houses forever pic.twitter.com/r9YUY0x9Fq

“My brother has just tested positive for COVID. The Delta variant,” a handful of accounts all wrote. “He has been double jabbed. How on earth can Johnson go ahead with relaxing the rules on the 19th July. It's madness. @BorisJohnson.”

Has your brother tested positive for Covid after being double jabbed? pic.twitter.com/IsCQkZYyuj

“This is disgusting, masks and social distancing should be in place till minimum christmas [sic] time at the earliest, the government are [sic] clueless,” the posts all said, “the delta [sic] variant should be taken seriously and we should go into a national lockdown to prevent it spreading.”

“Search ‘this is disgusting, masks and social’ and tell me the government don't think we're stupid brilliant gorilla marketing campaign though, would certainly get the sheep following,” one Twitter user said.

It’s not coincidence. Who is behind coordinated Twitter campaigns? Some stretch to many hundreds of identical tweets. Aggrieved individual, pressure group, corporation or country? I’ve investigated before and it’s difficult to know. https://t.co/ZlNOgblHmM

Political groups have been accused of using bot spam campaigns to push an agenda.

The Meir Amit Intelligence and Terrorism Information Center concluded that “there was a massive attack on mainstream social media and messaging platforms against Israelis and pro-Israelis.”

“Those attacks led to aggressive spamming of pro-Israeli content and also to suspension or blocking of accounts” the Israeli intelligence think-tank concluded.