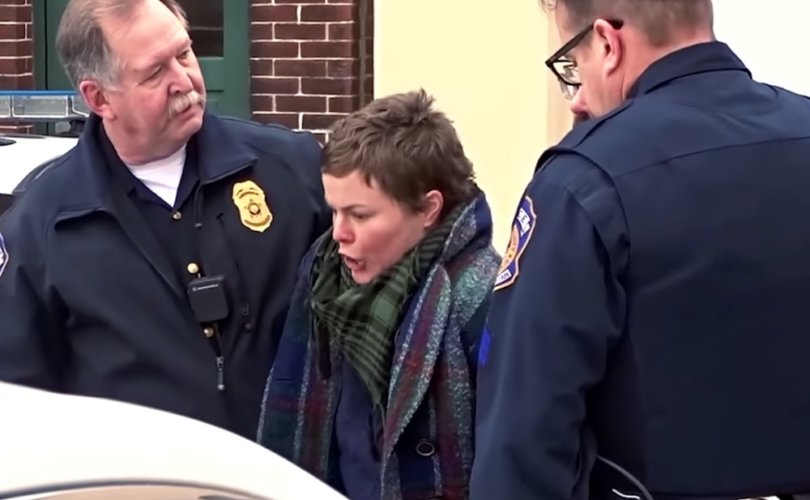 The unidentified woman who damaged the statue is led away by police as she insists, 'I don't know what a statue is!'YouTube / TFP

INDIANAPOLIS, Indiana, March 13, 2019 (LifeSiteNews) – New video from the American Society for the Defense of Tradition, Family and Property (TFP) shows a pro-transgender activist damaging a statue of the Virgin Mary as Christians prayerfully protested a “Drag Queen story hour” for children at an Indianapolis bookstore.

The shows a scramble when a woman lifted up and apparently dropped a statue of the Virgin Mary that stood in the midst of Catholics, including children, as they prayed. According to TFP, it was the intervention one of the praying men, Christopher Dunlap, that prevented the statue from breaking on the pavement. Witnesses said that the the young woman wrapped her arms around the statue and threw it to the ground, but Dunlap intercepted its fall.

As a result of the incident, the base of the statue broke off and its crown was damaged.

“It was curious that she attacked Our Lady directly,” TFP’s Rex Teodosio wrote of the incident. “Why the statue? The statue was not holding the banner, praying out loud, or debating with the counter-protesters. It was simply a statue of Our Lady of Fatima standing in a position of prayer.”

“Then the symbolism of the moment became evident. This was a clash of two queens. We were praying to our Heavenly Queen against a drag queen event.”

The assailant was arrested and taken into custody by local police who were on the scene. The Indiana attorney general’s office filed charges against her, according to TFP. As she was being taken by police to a patrol car, she shouted, “I don’t know what a statue is!”

“We were heckled by a few advocates of the LGBT community right from the start,” Teodosio wrote. These included a man who “kept blaspheming against God and the Catholic faith” and a woman who “kept telling us that we were being un-Christian for judging and hating ‘queer’ people.”

“Ironically, she was judging us,” TFP notes.

“Drag Queen story hours” are the latest trend in the LGBT world. During these events, men dressed as women read young children books, often about homosexuality or transgenderism. The gatherings often take place in public libraries in addition to private venues.

The TFP protestors finished praying the rosary after the attack, with Dunlap cradling the statue in his arms and his wife holding Our Lady’s broken crown.