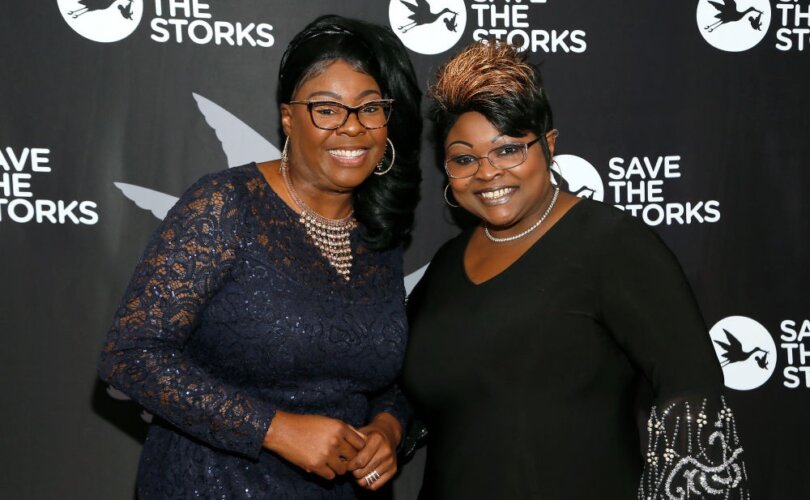 Diamond (L) and Silk (R) attend the Save the Storks 2nd Annual Stork Charity Ball at the Trump International Hotel on January 17, 2019 in Washington, DC. Photo by Paul Morigi/Getty Images for Save the Storks

(LifeSiteNews) — 51-year-old Lynnette “Diamond” Hardaway of the popular pro-Trump video blogging sister team “Diamond and Silk” passed away suddenly on Monday. No cause of death was immediately released.

News of the prominent conservative commentator’s death was first broken in a Monday night Truth Social post by former U.S. President Donald Trump, who characterized her passing as “unexpected.”

“Really bad news for Republicans and frankly, ALL Americans,” Trump wrote. “Our beautiful Diamond, of Diamond and Silk, has just passed away at her home in the State she loved so much, North Carolina.”

Trump said that “Diamond’s” sister, Rochelle “Silk” Richardson, “was with her all the way, and at her passing,” adding “[t]here was no better TEAM anywhere, or at any time!”

“Diamond’s death was totally unexpected, probably her big and precious HEART just plain gave out,” Trump said. “Rest In Peace our Magnificent Diamond, you will be greatly missed!”

On a GiveSendGo fundraiser page, “Diamond’s” family hailed the 51-year-old as “a True Angel and Warrior Patriot for Freedom, Love, and Humanity.”

“Diamond blazed a trail, founded on her passion and love for the entire race of humanity,” the fundraiser page states.

While it’s unclear what factors contributed to “Diamond’s” passing, a Twitter account belonging to herself and her sister published a post in November asking followers to pray for Diamond without providing specifics, NPR pointed out.

The Daily Beast reported that when “Diamond” made a brief reappearance to her show in December, she shot down rumors that she had been in the hospital with COVID-19. Her last show was posted December 15.

A well-known duo in the conservative world, Hardaway and her sister had entered the public eye during the 2016 presidential election, NPR noted. The outlet observed that the pair, who had previously voted on a Democrat ticket, “switched their party affiliation to vote for Trump and used their online platform to urge others to do the same.”

Diamond and Silk soon drew the ire of the left for their witty and engaging conservative content, and like many commentators on the right, faced social media censorship. In April 2018, the massively popular video-blogging pair reached out to Facebook to find out why followers weren’t being notified of new content.

In response, the sisters said they were notified by Facebook that their “content” and “brand” had “been determined unsafe to the community.”

Shortly after the news became public, Facebook (now Meta) CEO Mark Zuckerberg said the censorship of Diamond and Silk’s content had been “an enforcement error.”

The pair ultimately testified before Congress, blasting Facebook for censoring them and pointing out that “censorship is not a hoax, it’s real.”

“It is wrong for these social media giants to suppress and disregard people by diminishing and denying them their free speech,” they said.

Diamond and Silk landed a gig with Fox News in 2018, but their contracts were canceled in April 2020 after they raised questions about the coronavirus and the early public health response to it.

Since 2016, neither sister has wavered in her support for the embattled president, and recently the duo gave their full-throated endorsement for Trump’s third presidential campaign.

However, the Daily Wire reported that some left-wing accounts have taken the opportunity to mock Diamond’s death and make unfounded claims.

Opponents have asserted without evidence that the conservative commentator, who raised questions about the prevailing narrative surrounding COVID-19, had herself succumbed to the virus.

Andrew Zimmern, a TV host and chef, argued that “Diamond” was a “Covid [denier]” and had “died from contracting what she frequently called ‘a hoax.’”

Michael J. Stern of USA Today similarly declared that “MAGA / anti-vaxxer ‘Diamond,’ of Diamond and Silk, has died … of Covid.”

There is currently no evidence that Diamond’s cause of death was related either to COVID-19 or the experimental COVID-19 jab.