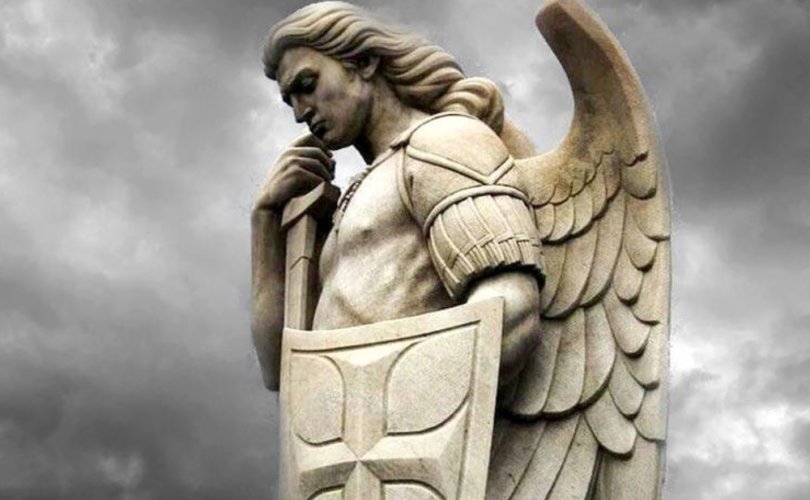 (LifeSiteNews) — Oscar Delgado is an independent Hollywood producer, philanthropist and former NBC News senior war correspondent. His latest film is Saint Michael: Meet the Angel, which will be shown in select theaters in the US, Poland and the UK on September 29, 2022. (Tickets available here.) In this interview with Regina Magazine’s Beverly Stevens, the filmmaker discusses the inspiration for the new film.

Oscar, what inspired you to do this film?

A lot of times, you wonder what is going on, especially in the last two years. I’m sure I am not alone in all this.

I have worked in secular films but in the last five years pretty much in faith-based films.

I believe the Faith is being lost because we have lost our devotions. For example, the belief in Purgatory. People actually believe these days that when you die you go to heaven and play with your dogs. That’s why I did the film Love and Mercy: Purgatory to teach people the truth.

Meanwhile, people see so much evil. There’s a growing awareness that what we are seeing is a reflection of the spiritual warfare going on. And that’s what caused me to remember the angels.

I worked with the Rector of the Shrine of St. Michael in Gargano, Italy, to produce this film. The goal is to inspire Catholics to return to the devotion that we had, previously, to the holy angels.

Tell us the story of the Gargano Shrine in eastern Italy.

Gargano was a cave for devil worshippers. St. Michael himself cleared it of devil worship. The Shrine is the only Catholic church in the world that has not been consecrated by human hands — by a bishop, a cardinal, or the pope. This is because St. Michael himself consecrated it. Michael told the local bishop in a vision: “Do not consecrate the Shrine for I have already done this. Start offering the Holy Sacrifice of the Mass.”

Why do you think the devotions disappeared?

I believe the reason why the devotions have disappeared is because the bad angels didn’t want us to invoke the aid of St. Michael and his heavenly angels.

In the nineteenth century Pope Leo XIII had a horrific vision of what would befall the Church in the future. He ordered that his prayer to St. Michael be recited by priests and laity after every single Mass.

When you think about it, it’s a great strategy. The demonic is brilliant, of course.

Where there is the grotesque, there are the demons.

The grotesque is the opposite of beauty, truth, and goodness. It’s vile, ugliness, and lies. But that’s where we are, today.

— Article continues below Petition —
Join Bishops in calling out Pope Francis' statement for contradicting the faith
Show Petition Text
5963 have signed the petition.
Let's get to 6000!
Thank you for signing this petition!
Add your signature:
Show Petition Text

It seems as if even the basic knowledge of the existence of St. Michael and the angels has gone.

It’s a process, to gradually strip the mystical and the supernatural knowledge of Christians. Nowadays people say, “Oh there’s no such thing as evil. People are good.”

No recognition of the Puppetmaster down below. They don’t believe that it’s the demonic keeping us away from beauty, truth, and goodness.

When this recognition diminishes and we do not turn back, Revelations 12 makes it very clear what will happen. The holy angels are on every page of that part of the Bible. They are God’s chosen ones to help us through these times.

This is all calculated; they don’t want any resistance to their demonic plans. Demons find it easier to manipulate humans who are not protected.

How and when did this all begin?

There was a demonic strategy to lessen the influence of the holy angels. In the old calendar, before Vatican 2, each archangel had their own feast day. St. Raphael was October 24. Gabriel’s feast was on March 24. Each of these angels played a pivotal role in our history. When the change happened in society, this changed. All of the angels were consigned to Michael’s feast day: September 29th.

Let’s return to the Leonine Prayer. Where does it figure in all this?

God doesn’t blindside us. He always warns us. Look at the history of Israel and her prophets.

Also, God doesn’t change. He knew what was coming in the 20th century and he used Pope Leo in order to give us a remedy. Leo’s horrible vision made him compose that prayer to the Prince of the Seraphim to beg Michael to combat this evil.

Devout Catholics realize that we need help. The Novus Ordo Mass I attend daily here in Minnesota has instituted the prayer after Mass. It’s like another arrow in your quiver.

Understand, angels don’t prevent evil from happening; they lessen the impact. And we need them now.

What do you see among young Catholics today?

You know, you don’t have to get mystical to understand this. It’s a straight marketing question: Where is the growth?

And here’s the answer: It’s in the Latin Mass and the traditional devotions. Young people want authenticity, tradition, things they can believe in.

Tradition has integrity and it is bringing fruits.

The future is not in the communal and banal; there is no interest.

Where can people see the film in theaters?

It’s being shown in a special one-day event on September 29, Saint Michael’s ancient feast day, in theaters in the USA, UK, and Poland. People can order tickets and find a theater near them online at stmichaelmovie.com.

Any last words for readers?

My intent in making films is to spread the good knowledge that we need to use what God has given us. If you want films like this, you need to

Honestly, walking into a full theater gives me inspiration. I need you guys. It’s critical for the future.

The Holy Angels will help us.