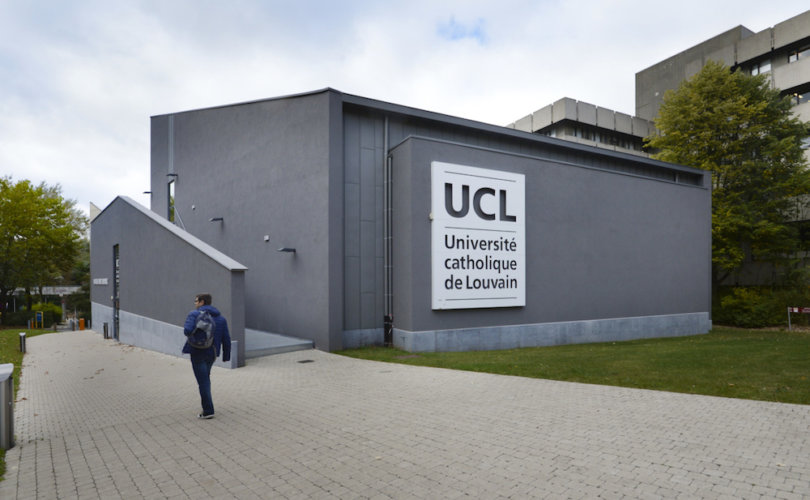 March 23, 2017 (LifeSiteNews) — A junior lecturer at the Catholic University of Louvain in Belgium is facing backlash from university officials because he distributed a 15-page document with philosophical arguments for calling abortion “murder” to about 100 first-year engineering students.

Stéphane Mercier has not been sanctioned yet, but the authorities declared in a statement on the university’s website that they are assessing the status of his text to determine whether it was actually used as part of his philosophy course. Whether that proves to be the case or not, UCL has dissociated itself from Mercier’s stance against abortion, calling it “contrary to its values.”

The case was brought to the public’s attention by Synergie Wallonie, a Belgian association for the promotion of gender equality. Its objective is to promote “gender mainstreaming while always fostering the respect of diversity and the need to think for each category of citizens (elderly, young, handicapped, immigrants, homosexuals). Sexual stereotypes and the neutral in masculine form perpetuate inequality but also the respect of unequal cultures present in our region.”

Synergie Wallonie’s “whistle-blowing” received an immediate response from UCL officials. Tania van Hemelryck, the special adviser to the university president on gender politics, spoke to Belgian television on behalf of the university, saying: “The authorities want to find out the exact status of the text and how it was used during this course, bearing in mind that in any case UCL defends the fundamental right to abortion, and particularly women’s right to choose.”

So the Catholic university not only supports abortion but it does so in the most radical way imaginable in describing abortion itself as a “fundamental right.” A fundamental right is a right that no one can dispute and that is valid for all – as this affair demonstrates.

The official statement published by UCL on its website says much the same thing:

“Whatever the outcome of the inquiry, the right to abortion is enshrined in Belgian law and the note that was brought to the attention of UCL is at odds with the values upheld by the university. Conveying standpoints that contradict these values in the framework of a teaching course is unacceptable.”

Mercier’s text, as distributed to the 100 or so engineering students who take a philosophy course in their first year at UCL, bears the title: “Philosophy for life: against a so-called “right to choose” abortion.” It aims to help students acquire philosophical reasoning in order to “try to get to the truth about a grave issue,” which requires “hearing all sides.” “Only madmen and badly brought-up children stop their ears and start shouting when they hear something that displeases or irritates them,” Mercier writes in the early stages of his exposé.

His text is neither religious nor militant, he argues. It is a rational argument that accepts rational criticism.

“Refusing debate (…) is dangerous; banning debate is typical of totalitarianism; it is also a sign of fear: who would want to prevent someone from arguing rationally but a person who is afraid to discover that some of his opinions are groundless? If I am searching for what is true, or has a good chance of being true, I must be able to listen to the arguments that are presented to me, to accept them if they are good, and to reject them if they are erroneous or deceptive. Refusing such a state of mind is to adopt the fanatic’s posture, concerned not with truth but with the triumph of his opinion, whatever the price.”

Mercier’s objective was to make his students think, and to debate if they chose to do so. But even debating on the issue of abortion is now banned in many countries such as Belgium and France – even at a Catholic university in a country whose sovereign is a Catholic.

Mercier produced a well-reasoned paper, largely inspired, he writes, by American philosopher Peter Kreeft. Its intellectual quality probably explains the uproar with which is has been met. Its main argument is simple: If the human embryo is perfectly individualized as a human person, it is a member of our species, an innocent being that should not be killed. It addresses many of the usual arguments in favor of legal abortion and then demolishes them with plain logic and scientific fact.

Little does it matter whether the child in the mother’s womb is “completely developed or not,” the text explains. “Neither is a five year-old child.” If it’s morally wrong to kill an innocent person, then “killing a child at the embryo or fetal stage in the womb of its mother is wrong, just as it is wrong to kill it if it is five years old. Always. In every case. Just like rape. Rape is morally wrong in every case. There are no circumstances that can make this act good, or even simply acceptable. When talking of abortion or of rape, one is talking of an act that we call intrinsically wrong, an act that is wrong in itself and by itself. It is morally evil of itself, whatever the circumstances.”

And here are the words that provoked media hysteria in Belgium and beyond: “The truth is that abortion is the murder of an innocent person. It is even a particularly loathsome murder, because the innocent in question is defenseless. (…) Nowadays we hear some people saying for example that at a personal level they condemn abortion as being immoral, but that it would never occur to them to make it illegal. Such reasoning is astonishingly absurd, if one bothers to think about it. (…) Just imagine that the same individual should declare that on a personal level, he finds rape really immoral, but that ‘in order to respect every person’s liberty’ (except perhaps that of the victim) it should not on that account be made illegal. Absurd, obviously! Well, if abortion is murder, as we have said, is it not more serious, even, than rape? Rape is immoral, and thankfully it is also illegal. Should not abortion, which is even more immoral, even more so be illegal?”

The headlines in Belgium indignantly screamed: “A lecturer at UCL considers abortion to be worse than rape!”

A woman student from UCL was quoted as saying: “It shocks me, especially because in philosophy classes, you try to think, to reflect and to open your mind.” It was not clear whether she had read Stéphane Mercier’s text.

A news website for youngsters, newsmonkey.be, warned its readers against a “rather offensive” publication circulating on the Internet, giving the floor to Baptiste Dethier of Synergie Wallonie, the original informer. “According to Baptiste, the author states that abortion represents ‘the culture of death’ without ever resorting to solid arguments and that is what is ‘most dangerous,’ he says. This text does not provide a critical assessment of the issue and is not open to discussion. On the contrary, to put it like Baptiste Dethier: ‘It is very difficult for students in first year, at age 18, to adopt a critical view of the question and to be capable to bring in counterarguments.’”

This is occurring at a Catholic university that continues to flaunt its religious identity. It has four governing bodies, of which the first is the “Board of Governors: the archbishop of Mechelen-Brussels and residential bishops of Wallonia. The Archbishop of Mechelen-Brussels, who is also the University Lord Chancellor, chairs the council,” according to UCL’s website.

On its website, UCL also calls itself a “stabilizing force in an uncertain world.” “The values on which UCL’s vision is based are openness to others and to differences, solidarity, freedom and respect. Faculty enjoy academic freedom enshrined in the constitution, specifically, freedom of thought in the pursuit of truth arrived at scientifically and free from the undue influence of current trends. UCL is a cosmopolitan and intellectual human space whose diversity stimulates encounters between people of different backgrounds and with the world itself in the spirit of rational discussion and mutual enrichment. Its Christian tradition is a living heritage, a driving force of an authentic pluralism that benefits and respects all people regardless of their beliefs.”

Except for those who believe that abortion is murder?