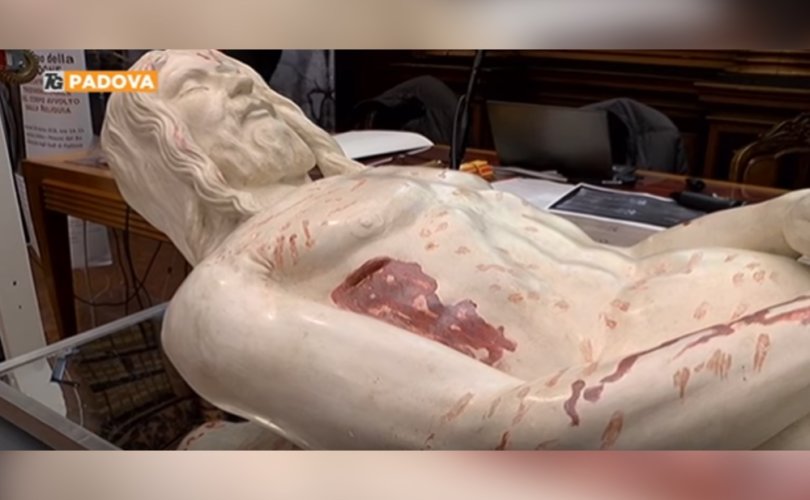 March 29, 2018 (LifeSiteNews) – Using the Shroud of Turin, a professor at the University of Padua has created a 3D “carbon copy” of Jesus Christ after being tortured and crucified.

The Shroud of Turin is believed to be a cloth in which Jesus was wrapped after he died.

“We believe that we finally have the precise image of what Jesus looked like on this earth,” Giulio Fanti, the professor behind the sculpture, told the Chi periodical. Aleteia translated his remarks.

Fanti says that based on the marks on the Shroud of Turin, Jesus received “a total of at least 600 blows.”

The sculpture of Jesus’ tortured body reflects these wounds.

“At the moment of his death, the man of the Shroud sagged down towards the right, because his right shoulder was dislocated so seriously as to injure the nerves,” Fanti said.

During Holy Week, Christians pay particular attention to the suffering Christ underwent before and during His crucifixion.

The following is the English translation of Vexilla Regis (“Abroad the Regal Banners Fly”), an ancient Latin hymn traditionally sung during Holy Week. The hymn gives particular attention to the Cross, by which the sins of humanity are redeemed.

Abroad the regal banners fly,
Now shines the cross’s mystery;
Upon it Life did death endure,
And yet by death did life procure.

Who, wounded with a direful spear,
Did, purposely to wash us clear
From stain of sin, pour out a flood
Of Precious water mixed with Blood.

O lovely and refulgent Tree!
Adorned with purple majesty;
Culled from a worthy stock, to bear
Those limbs which sanctified were.

Blest Tree, whose happy branches bore
The wealth that did the world restore;
The beam that did that Body weigh
Which raised up Hell’s expected prey.

Hail, Cross, of hopes most sublime!
Now in this mournful Passion time,
Improve religious souls in grace,
The sins of criminals efface.

Blest Trinity, salvation’s spring,
May every soul Thy praises sing;
To those though grantest conquest by
The Holy Cross, rewards apply.