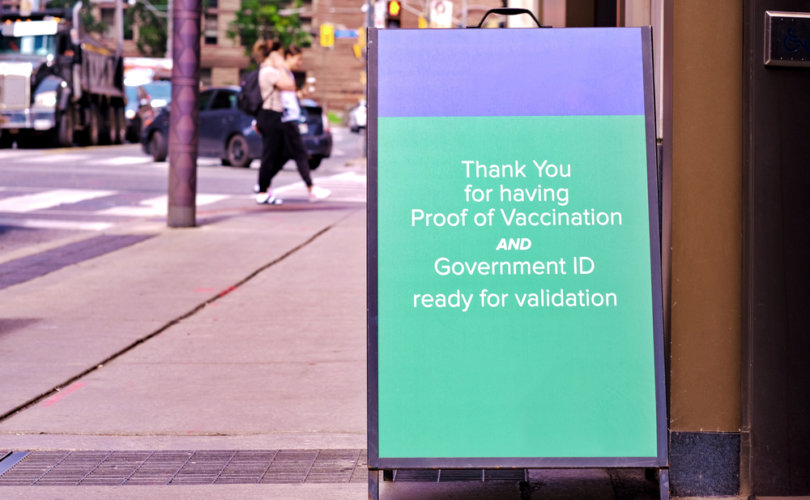 (LifeSiteNews) – A Canadian bioethics professor suggested that the government should go “all the way” in restricting access to services for Canadians who have chosen to not get the COVID jabs.

“The question is always how far can we push,” said Vardit Ravitsky, who works as a professor of bioethics at the School of Public Health, University of Montreal, in an appearance on CBC’s “Power & Politics” Tuesday.

Ravitsky also serves as the chair for the Pierre Elliott Trudeau Foundation and works with many other Canadian scholars who are tasked with providing policy advice to Canadian lawmakers.

Ravitsky then said that “we’re not going to send a nurse to your home and hold you down” or “say it’s illegal to not get vaccinated,” but “the question is always, how far can we go?”

“I would say if you need access to food, and access to medication. Grocery stores, supermarkets, pharmacies. Everything else that is not food and medication that you need for your health, at this point, becomes in a way, a luxury for you because you made your choice not to get the vaccine,” said Ravitsky.

Ravitsky made the comments in regard to a recent announcement by Quebec Premier François Legault, who said those who do not take the COVID jabs will be subject to monetary fines in the form of a “health contribution” tax.

Former Conservative Party of Canada MP (Member of Parliament) Gerry Ritz, who served as Canada’s Minister of Agriculture under former Prime Minister Stephen Harper from 2007 to 2015, was blunt about why Ravitsky was suggesting the vaccine free be more restricted.

Twitter user @MightyMusa blasted Ravitsky, writing, “You are neglecting the fact that vaccinated people are catching covid from each other. They are also ending up in ICU. They are also experiencing vxn injuries that lead them to hospital. The comments below show the vitriol and hate this type of talk ignites in others. Shameful.”

Ravitsky said that the vaccine-free “cannot” be allowed to “circulate freely and increase the burden on the health-care system.”

“So, increase the pressure, absolutely, yes,” concluded Ravitsky. “But if you’re doing it through some sort of fine or forced contribution, at least do it based on a sliding scale.”

Ravitsky said that while monetary fines for those who are un-jabbed might be “prohibitive” for low-income earners, she does not have any issues with “increasing the pressure on those who are not vaccinated by choice to go get the vaccine.”

“But I think the government still has not exhausted other alternatives that are more equitable and more fair. For example, we could just demand proof of vaccination, the famous vaccine passports for all non-essential services and commerce and activities,” said Ravitsky.

Lawyer for the Justice Centre for Constitutional Freedoms (JCCF) Allison Kindle Pejovic told LifeSiteNews that Canada’s Charter of Rights and Freedoms “protects all Canadians from laws that would attempt to force medical treatment upon them against their will.”

“Such a suggestion (of mandated vaccination) is an affront to democracy and something one would expect in authoritarian regimes such as China, or the former Soviet Union,” said Kindle Pejovic.

Jay Cameron, litigation director for the JCCF, confirmed with LifeSiteNews today that the JCCF will be “filing a constitutional challenge in Quebec to the imposition of a fine on those who have not taken one of the new covid shots.”

Maxime Bernier, the leader of the People’s Party of Canada (PCC), blasted Quebec Premier François Legault’s plan to hit the vaccine free with a “health contribution” tax, saying Legault has decided to “scapegoat a minority of the unvaccinated for problems for which it is itself responsible.”

Three Canadian Premiers, Jason Kenney of Alberta, Scott Moe of Saskatchewan, and Doug Ford of  Ontario, said  their provinces would not mandate any vaccines in response to Duclos’s mandatory jab comments.

As for the Pierre Elliott Trudeau Foundation, it recently said that the COVID crisis has created “an unprecedented opportunity to reshape our social contract to ensure the protection of the most vulnerable among us.”

Pierre Elliott Trudeau, who died in 2000 and served as Prime Minister for many years through the 1960s to the early 1980s, is the father of current Prime Minister Justin Trudeau. It was under Pierre’s leadership that Canada legalized abortion in 1969.

In September, Justin Trudeau, during a TV interview that has since gone viral, called Canadians who have chosen to not get the experimental COVID-19 jabs “extremists,” “racists,” and “misogynists” who deny science.