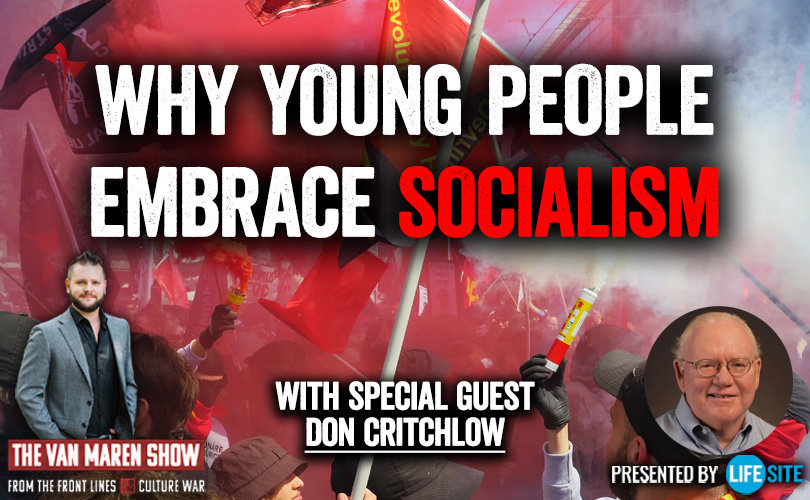 (LifeSiteNews) — A conservative author and university professor spoke up against a “quiet revolution” occurring inside institutions in the United States, with the goal to push a radical authoritarian agenda.

In this episode of The Van Maren Show, Don Critchlow, a professor at Arizona State University, talked to Jonathon about how a crisis of education in America has led the youth to embrace socialism, wokeism, gender ideology, and Marxism.

Professor Critchlow has written several books on figures and ideas in conservatism and populism, and recently came out with a new book titled Revolutionary Monsters: Five Men Who Turned Liberation Into Tyranny.

Critchlow mentioned on this podcast how America is undergoing a revolution of its own similar to the Communist revolutions in China under Mao and Russia under Lenin, but largely non-violently. “The radical left is taking over our major institutions and they’re pushing very quickly toward a socialist state,” he said. “We’re experiencing a quiet revolution that is becoming increasingly authoritarian.

The academic highlighted what has led many people, especially college students, to accept the progressive agenda of critical race theory, gender theory, socialism, and more.

Besides influence from the media, Critchlow added that a wrong education and a decline in reading, vocabulary, and thinking skills has made it “very easy to pour bad ideas into their brains.”

He referred to a poll which showed “52 percent of young Americans approve of socialism,” and “another poll that said that 20 percent of our very young people want to abolish private property.” The professor pointed to this as “a wake-up call” for the need to understand history and the past.

Regardless, Critchlow remained optimistic that this revolution will be reversed once people fully understand it. “We shouldn’t be demoralized by what we’re seeing. We should step forward, and act as heroes every day in their own small way.”