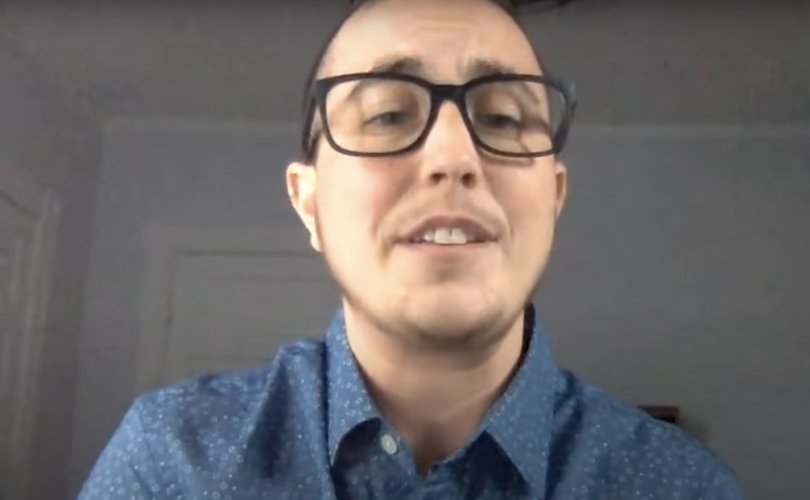 (LifeSiteNews) – A former university professor who was forced to resign from her post last year following her open support of pedophilia – which she argued should instead be called “minor attraction” – has been hired by a Johns Hopkins University-affiliated department created to prevent child sexual abuse.

34-year-old Allyn Walker, Ph.D., a woman who identifies as “gender non-binary,” will assume the position of postdoctoral fellow at Johns Hopkins’ Moore Center for Prevention of Child Sexual Abuse on May 24 after she was forced to step down from her post at Old Dominion University in Virginia over comments supporting pedophilia last November.

We are excited to share that Allyn Walker, PhD, will be joining the Moore Center as a postdoctoral fellow on May 25.

— Moore Center for Prevention of Child Sexual Abuse (@MooreCenter_JHU) May 12, 2022

The organization, founded in 2012, is “a research center that creates, through rigorous science, a public health approach to preventing child sexual abuse,” according to the center’s website.

Walker’s hiring has been widely criticized, owing to controversial remarks she made calling for the rebranding of pedophiles as “minor attracted people,” or “MAPs,” in a November interview with pedophilia apologist group Prostasia.

Walker also released the book “A Long, Dark Shadow: Minor Attracted People and Their Pursuit of Dignity” in June last year, aimed at “destigmatizing” pedophilia. In the book, Walker claims that helping pedophiles to reject their “minor attraction” is a “not at all effective” form of “conversion therapy.”

Walker proposes that a distinction between sex offenders and pedophiles must be made, with the latter being a morally irrelevant sexual attraction that need not be shamed, so long as no criminal activity is committed. To this end, Walker has advocated for the use of “high quality child pornography” and child-like sex dolls for “minor-attracted persons” to satisfy their desires.

Walker’s defense of sexual attraction to children prompted more than 15,000 people to sign a petition in November calling for Old Dominion to fire the then-assistant professor of sociology and criminal justice.

While Walker was forced to leave her position later that month, her resignation only took effect early May 2022, at which point she released a joint statement with Old Dominion University asserting that her “scholarship had been mischaracterized by some in the media and online,” chalking up the apparent bias to her “trans identity.”

“As a result,” she added, “multiple threats were made against me and the campus community generally.”

The Moore Center received widespread backlash after revealing that it had hired the disgraced professor, subsequently publishing a series of tweets defending its decision to hire her.

The group described Walker as “a leader in the field of perpetration prevention research, which is essential for developing a comprehensive public health approach to addressing child sexual abuse and effective prevention programs.”

Continuing, the research center praised Walker’s “expertise and qualitative research methodology,” which it said will “enhance and advance the work of the Moore Center.”

“We are excited to have them join the team,” the center wrote, addressing Walker as “they” in accordance with current LGBT pronoun criteria.

Allyn Walker is a leader in the field of perpetration prevention research, which is essential for developing a comprehensive public health approach to addressing child sexual abuse and effective prevention programs. We are delighted to have Allyn Walker join our team. https://t.co/IuFQj7FVIL

— Moore Center for Prevention of Child Sexual Abuse (@MooreCenter_JHU) May 13, 2022

In response to the Moore Center hiring Walker, University of New South Wales professor Michael Salter argued that any attempt to address child sexual abuse prevention must first focus on the victim, not the offender.

“To retain its ethical foundation, child sexual abuse prevention work has to be victim-centered,” Salter stated, later questioning what is “victim-centric about the claim that there is nothing wrong with being sexually attracted to children?”

“Too much prevention work is being driven by researchers and practitioners who work solely with offenders or people sexually attracted to children. What these individuals say in a research encounter or forensic interview does not line up with victim report.”

To retain its ethical foundation, child sexual abuse prevention work has to be victim-centred.

What is victim-centric about the claim that there is nothing wrong with being sexually attracted to children? https://t.co/YrVFZ1qLsO

Continuing, Salter argued that “[w]e need to integrate the evidence base to develop a comprehensive approach to CSA [child sex abuse] prevention – one that recognizes and respects CSA victims and survivors as witnesses and a critical source of information.”

Commenting on the Walker controversy for The American Conservative last year, Rod Dreher noted that considering pedophilia as simply another form of sexual attraction could ultimately lead to dangerous changes in the law.

“Allyn Walker is playing with fire,” Dreher stated. “Surely there must be some way to get these suffering people the help they need without moving towards considering pedophilia just one more ‘sexual orientation.’ Because if it ever should become that, we are halfway to legalizing it, following the same path that standard homosexuality took.”

“If sexual desire is the equivalent of identity, and if to sexually desire minors is at the core of one’s identity, then how can we stigmatize or otherwise suppress pedophiles if we recognize that other kinds of sexual minorities have civil rights?”

“Anybody who has lived through the last twenty years knows that sexual identity and the law is a slippery slope. This needs to be crushed right now, without apology,” Dreher concluded.