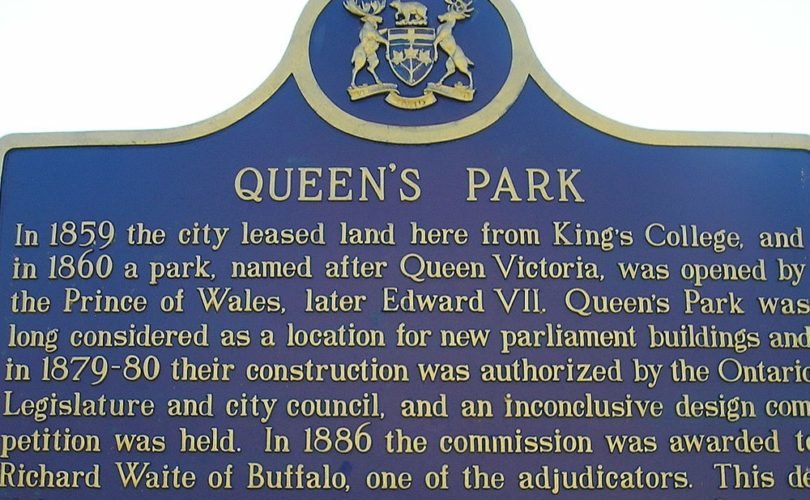 But artist Rosalie Maheux defends the use of hardcore pornographic images in her artwork – now on display in a gallery in a provincial government building – as a “social critique of the excessive value that society places on women’s sexual attractiveness.”

From a distance, Maheux’s controversial collage looks like a kaleidoscope, but up close it is revealed to be made up of sexually explicit images.

It “only makes sense that I would take the images of women that are out there, including the sexualized and the pornographic, reconfigure them on my own terms, and offer them back as something transformed,” wrote Maheux on her website Friday, a day after Progressive Conservative MPP Laurie Scott asked that the artwork be removed.

The 26-year-old artist’s apologia doesn’t impress Andrea Mrozek of ProWomanProLife, a “pro-life site by women and for women in Canada,” who finds Maheux’s work “just juvenile.”

“Regardless of the artist’s intent, however noble it may be, there is no way to reclaim an objectifying image of a women as anything other than objectifying,” Gilman wrote in an email to LifeSiteNews.

“It’s similar to putting a graphic rape scene in a movie and claiming that the point is to show how brutal rape is, but still panning up and down her naked body for ‘artistic merit.’”

Scott voiced similar objections about Maheux’s “Sacred Circle VI,” part of an exhibition of work by artists under age 30 in the John B. Aird Gallery, located in the lobby of an office building used by Queen’s Park.

Unambiguous opposition to pornography used to be a common cause among feminists, but now some feminists claim that pornography “empowers” women, observed Mrozek.

She also pointed out the difficulty inherent in protesting the artwork, because it draws attention to it. “Maybe we’re feeding into it by reporting or talking about it,” Mrozek said, adding, “People like this artist keep getting attention and hits to their website.”

But Gilman pointed out that “we are dealing with an issue where everybody is ALREADY seeing it. It would be hard to bring more attention to the sexualization of our society. Therefore, I think it’s appropriate to protest everywhere we can.”

He noted that using Maheux’s own argument that “voyeurism, and sexually degrading women is a crime,” it follows that “pictures of this are not ‘Art’, they are evidence.”

The gallery stood behind Maheux and has refused to remove the artwork, part of an exhibition whose works were selected by Gary Michael Dault, but did put up a sign warning of mature content. The exhibition closes July 24.

Maheux, meanwhile, stated on her website that “I will give interviews only to media that promotes an open minded and positive view of contemporary art.”