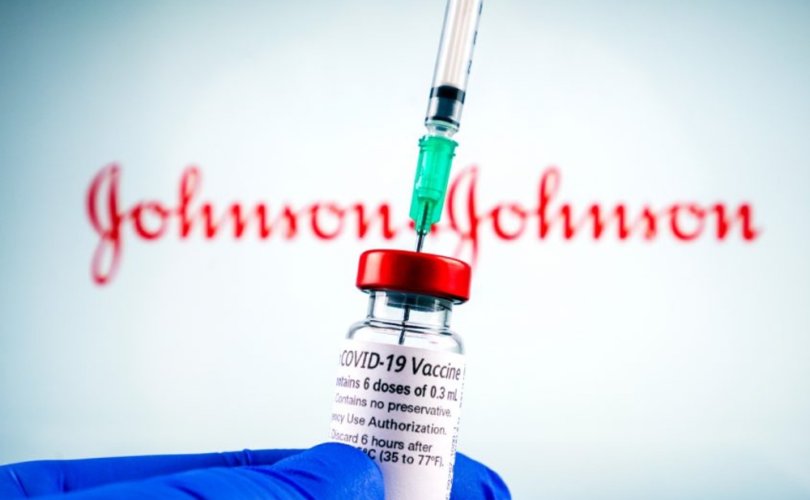 (LifeSiteNews) – Project Veritas’ third video in a series investigating COVID vaccines and the individuals who work in health care and vaccine production exposes the anti-jab sentiment of two Johnson & Johnson employees who express doubts about the safety of the vaccine in the long term.

The explosive investigative piece features footage of Brandon Schadt, Johnson & Johnson’s regional business lead, and Justin Durrant, a Johnson & Johnson scientist. The footage was captured in restaurant settings and contains the unfiltered statements of both Schadt and Durrant. There is some foul language in the videos that is censored.

Pressed by the Veritas reporter about whether the vaccine should be given to children, both Durrant and Schadt expressed reluctance to vaccinate children.

Schadt was asked if it would be better to homeschool a child or vaccinate them if vaccines were mandated by a school system. “Honestly, I don’t think a kid needs to get it,” he said, adding, “it’s a … kid – you know? Kids shouldn’t have to get a … vaccine.”

He expressed concerns about potential health issues that the jab could cause in children. “It’s a kid, you just don’t do that … not something that’s so unknown in terms of repercussions down the road … ”

He admitted that we do not know the long-term effects of the jab. “I mean, how could you – right – there’s nobody who’s 30 years in, who said, ‘Hey, I had the vaccine and I don’t have a third eyeball.’”

Durrant intimated to the reporter that a 12-year-old should not get the jab. He shook his head and added with a wink, “I didn’t tell you though.” Durrant also texted a Veritas reporter and cautioned that he wanted the information to stay between them – referring to cancer risks associated with the shot – because he could get in “mad trouble” if the information was released.

Mainstream media outlets and so-called “expert” health officials like Anthony Fauci have repeatedly claimed that the vaccines are “safe and effective” and that there has been very little pushback against those claims by most legacy media organizations.

Schadt expressed deep distrust for the mainstream media by saying, “In no capacity should ever trust anything that they say.”

Despite the unnecessary risk posed to children by the COVID jabs, there have been calls to push the age of vaccination lower and lower. Pfizer-BioNTech recently claimed that a low dose of its vaccine is safe and effective for kids ages 5-11.

Durrant stated in the video that “once you’re out of preschool,” that is when “you need to start” vaccinating children.

Schadt expressed further concerns about the effect that the jab might have on an undeveloped child. “It’s a kid who’s not developed yet – there’s so much growth … And you’re young, you can rebound from the virus, you’ll be fine.” In reference to the push to vaccinate children, he added, “It’s terrible.”

As a scientist, Durrant chose not to receive the J&J jab because in his opinion the “effectiveness” was not sufficiently demonstrated. Instead, he opted for the Moderna shot. In April, various countries, including the United States, paused the rollout of the J&J shot due to confirmed blood clots that led to death and serious injury in some patients.

The Johnson & Johnson vaccine uses the fetal cell line PER.C6 in its design, development, and testing. The PER.C6 fetal cell line owned by Janssen was developed from retinal tissue taken from an 18-week-old baby boy who was aborted in the Netherlands in 1985, which in 1995 was converted into a fetal cell line.

Also during an exchange, Durrant laughed about inconveniencing unvaccinated adults if they refuse to comply with mandates imposed upon them. Referring to pressuring the unvaccinated as a method of coercion, he said, “ … you know, you’ve just got to keep doing things like that where you’re almost like a second-grade citizen if you’re not vaccinated … ”

The J&J scientist admitted that this would create a society with a “top grade” and a “second grade,” where different categories of citizens enjoy different privileges based on medical status.

Durrant stated that going after the “pockets” of the unvaccinated is a sure way to achieve compliance. “ … if you’re working for a big company and you’re going to lose your job, best believe you’ll be the first one in line [to take the COVID vaccine].” He added, “That’s what we’re doing.”

Part One of the Project Veritas series showed video that U.S. Health and Human Services insider Jodi O’Malley, who works as a registered nurse, captured secretly from a hospital showing a doctor admitting that heart issues such as myocarditis are a well-known side effect among health professionals. The doctor in the video stated, “They are not reporting” on the adverse effects in her experience since the vaccines rolled out almost a year ago.

Part Two of the series showed a candid conversation between a Project Veritas reporter and FDA economist Taylor Lee, who had striking things to say about how he believed people should be coerced into vaccination. Among other things, Lee said that vaccines should be “blown” into the unvaccinated like a “blow dart.” He added that he thinks “there needs to be a registry of people who aren’t vaccinated. Although that’s sounding very [much like Nazi] Germany … I mean, think about it like the Jewish Star [for unvaccinated Americans].”

Lee also opined that politics takes precedence over the scientific truth in FDA circles. “There are political appointees [at the FDA] that are generally scientific advisers or are appointed by the president or the commission … They’re being paid based on if the other people are staying in power,” he said.

Johnson & Johnson has a history of producing and marketing health-care products known to be harmful. The abortion-supporting jab producer marketed talcum-based baby powder to Black women amid concerns over ovarian cancer risks. The U.S. Supreme Court rejected an appeal from the company that sought to get out of paying a $2 billion penalty related to the talcum powder scandal. The company has set aside billions for future lawsuits expected to stem from illnesses associated with its products.