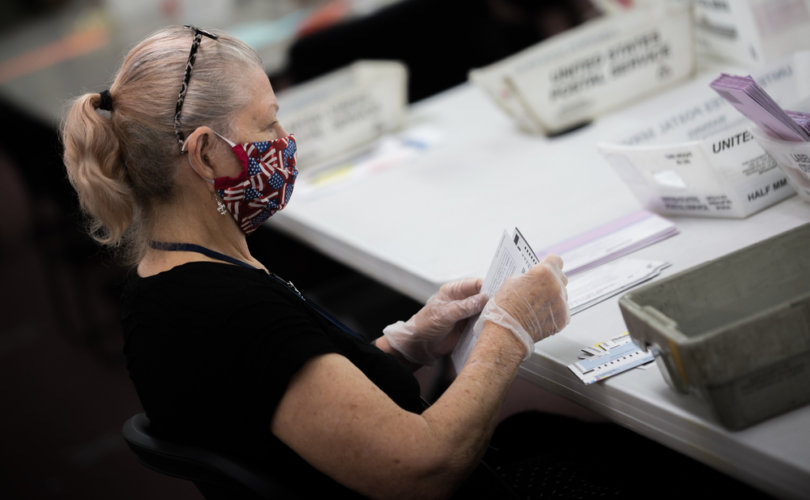 WASHINGTON D.C, November 3, 2020 (LifeSiteNews) – A growing number of voting machines across the nation are being reported as broken, with voters being told that their votes will be scanned “later.”

James O’Keefe, of Project Veritas, reported that he had received word from a voter in Greenville, South Carolina, who “waited two hours to vote only to be told that the scanners were ‘broken’ and the votes would be ‘tabulated later.’” The woman continued to say that “her ballot was then tossed in a barrel with other ballots.”

In North Carolina also, machines have been flagged as having problems, with a voter writing that his ballot had been placed “in an ‘emergency’ slot to be ran through later.”

Another user commented that “Scanners are ‘broken’ in multiple locations in Chicago. In Lakeview and Arlington Heights.”

Yet another person mentioned that the machines had also been down in Glen Ellyn, Illinois: “Waited with others who didn’t trust the officials at the voting location. Seems like they felt the pressure of people’s distrust, turned it off, then back on. Magically started working again.”

A woman named Amy Thomas pointed out that the scanner was broken in Westmorland County, PA, and the “poll worker said they would collect them and scan them in later once the machine was fixed.”

Project Veritas also posted a video of polling machines in New York City which were broken. One machine was broken whilst another was locked. Attendants were heard saying that they would “scan the ballots” when the machines were working again. SV News reported that that particular polling station had opened half an hour late.

SV News also posted a video of a further broken machine in Flatbush, New York. O’Keefe had received comments, mentioning that machines were broken or locked in Brooklyn.

Similar scenes are occurring in Nevada, as one report notes that in Sun City, Clark County, “the majority of the check-in machines are down.”

The Nevada Elections page noted that “several polling locations in the county are experiencing technical problems and have not yet opened.”

Voting machines had been down this morning in Spalding County, Georgia, but have since returned to working order. The county saw 60.3% of its voters vote for President Trump in 2016.

Meanwhile, the New York Post has highlighted that dead people have been registered to vote and even placing votes.

Numerous people on Twitter have called out the phenomenon as being “voter suppression” and “suspicious.”