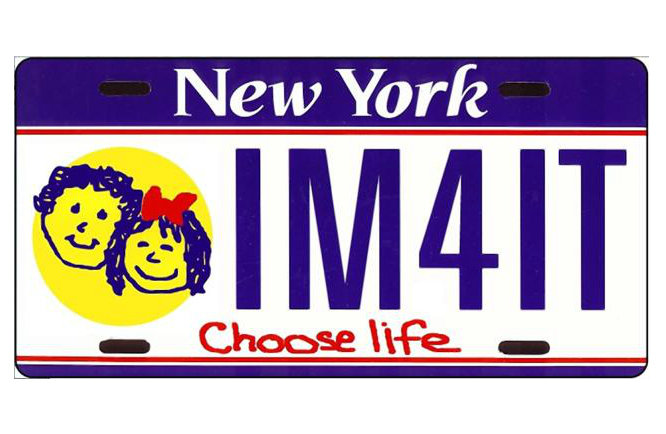 ALBANY, NY, May 26, 2015 (LifeSiteNews.com) – The pro-life message can be classified as “patently offensive,” a federal appeals court ruled last week. The new opinion came as a three-judge panel ruled that New York state was right to reject a “Choose Life” license plate on the grounds that it may grate on New Yorkers' political sensibilities.

The judges split on whether New York could deny a pro-adoption group the right to have its own license plate, although the state has in the past allowed plates endorsing political causes associated with the liberal viewpoint, such as environmentalism.

Judge Rosemary Pooler, who was appointed by President Clinton, wrote that the state's denial did not harm anyone's right to freedom of expression, because drivers “may display a ‘Choose Life’ bumper sticker — or even cover every available square inch of their vehicle with such stickers. That message will resonate just as loudly as if vehicle displayed a ‘Choose Life’ license plate.”

Judge Debra Ann Livingston, a President George W. Bush appointee, wrote in her dissent that “a proposed custom plate depicting a sun and two smiling children, and bearing the words, ‘Choose Life’ [thought] to be ‘patently offensive’” was “surprising.”

“Pro-adoption organizations should have the same speech rights as any other organization. While the district court affirmed this basic freedom, the circuit court denied free speech in favor of government censorship,” said Jeremy Tedesco, senior counsel at ADF. “The state doesn’t have the authority to target The Children First Foundation specialty plates for censorship based on its life-affirming viewpoint.”

The ruling is the lastest round in a legal battle that has raged for more than a decade and, pro-lifers say, seen state officials repeatedly suppress their First Amendment rights.

The Children First Foundation applied for the specialty license plate in 2002, but state officials say the message and design was “too controversial.” In 2004, the Alliance Defending Freedom filed a lawsuit on CFF's behalf.

New York's Department of Motor Vehicles repeatedly denied the “Choose Life” license plates on the grounds that the message was “patently offensive.”

The same appeals court rejected an effort to suppress the plates made by then-Attorney General Eliot Spitzer and agreed that Albany officials denied the plates based on viewpoint discrimination.

In 2006, a three-judge panel of the Second Circuit Court of Appeals noted that CFF “specifically alleges that defendants denied the picture-plate application ‘based on their disagreement with [the] life-affirming viewpoint expressed on the plate.’”

“On a motion to dismiss, we must accept this allegation, and all reasonable inferences drawn from it, as true,” the judges ruled.

Spitzer, a Democrat who strongly supported abortion-on-demand and gay “marriage,” served as governor beginning in 2007 but resigned his office in the midst of a prostitution scandal only 15 months later.

In November 2011, a federal court ruled that “New York has run afoul of the First Amendment by giving the Commissioner unbridled discretion to engage in viewpoint discrimination.”

Yet the case has dragged on through the appeals process.

“The state has wrongly gotten away with speech discrimination against our client for more than 10 years,” Tedesco said after last week's ruling.

He said ADF is considering its next legal move.

As of this writing, “Choose Life” license plates are available in 25 states and the District of Columbia.