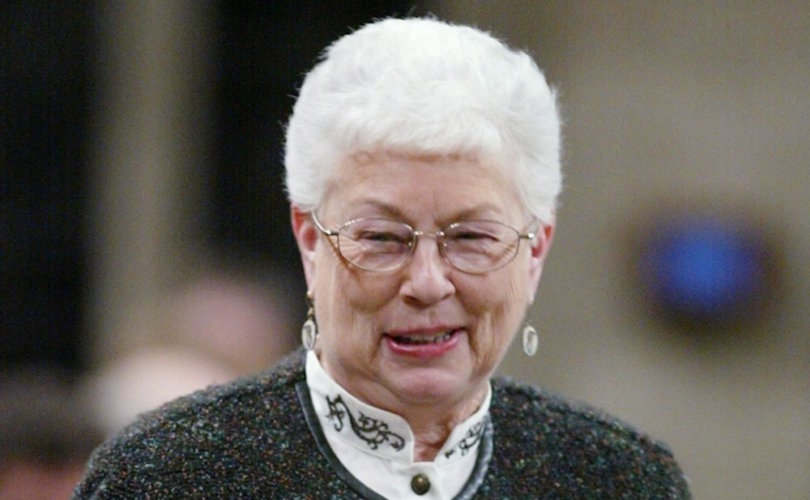 “Reflecting on Elsie Wayne's life, the valiant woman of Proverbs (31:25) comes to mind: ‘Strength and dignity are her clothing, and she laughs at the time to come,’” observed Father Tony Van Hee, who has prayed and fasted on Parliament Hill since 1989 for an end to abortion.

“‘Now cracks a noble heart,’ the words of Horatio upon Hamlet’s death, also come to mind,” added Van Hee. “Canada weeps the loss of such a one as she.”

Wife of Richard and mother to sons Daniel and Stephen, Elsie Wayne entered federal politics after 10 years as Saint John’s highly popular and first woman mayor.  Her Ottawa career began in the spotlight when she and Jean Charest were the only two Progressive Conservative MPs elected in the Jean Chretien-led Liberal victory of 1993.

In the following 11 years, the MP for Saint John became well known for her forthrightness, sense of humour, hearty laugh, and flamboyant sweaters, but more significantly for her consistent, trenchant and courageous defence of unborn children, which drew the praise and gratitude of pro-life leaders, who maintained she was the one of the strongest pro-life politicians during that time.

Wayne, who served as deputy leader of the party and as PC interim leader for seven months in 1998, annually livened CLC’s March for Life on Parliament Hill with her forceful, folksy speeches. She was “one of the original co-chairs of the Parliamentary Pro-life Caucus,” noted Hughes, and a steadfast supporter of Father Van Hee.

When the priest was pushed from his original location on the Hill to a spot by the Eternal Flame in 2001, reputedly because of increased security, Wayne was upset. “Instead of moving Fr. Van Hee, they would have been better to keep him right here,” she told LifeSiteNews at the time. “I feel so badly. He is fighting for the values we are here to protect. I’m going down to visit him.”

“Yes, Elsie was a remarkable woman who defended all the right causes, the right to life being one of the foremost,” noted Van Hee, “but she could laugh — a laugh and a smile as engaging as any you will see.”

Hughes recalled Wayne’s evident love for her family and grandchildren. “At the summer break, she would say that she couldn’t wait to get back home, throw the kids in the back of the pickup truck and head to the beach.”

At age 71 and in her ninth consecutive term as an MP, Wayne was vilified and attacked in the spring and summer of 2003 after denouncing the campaign for homosexual “marriage.”

In the ensuing firestorm of controversy, then PC MP and openly gay Scott Brison called for Wayne’s resignation, Prime Minister Joe Clark distanced himself from her remarks, and a “gay rights” activist group launched a human rights complaint against her.

In February 2004, Wayne announced she would not be running in the federal election that October, in which the newly constituted Conservative Party of Canada under leader Stephen Harper reduced Paul Martin’s Liberals to a minority government.

“There comes a time in our lives when we must decide whether the journey is ours to continue or if the torch should be passed to another,” the 72-year-old Wayne said. “As much as I love my role, and although there are many more adventures on the horizon, there is nothing I would rather do than spend more time with my husband, Richard, our boys and their families.”

In 2009, Wayne suffered two strokes that in the immediate aftermath left her with partial paralysis on one side of her body, and the public heard little more from her after that time.

But her public defense of unborn children remains a great part of her legacy, and typical of that is a statement at a press conference for the Parliamentary Pro-life Caucus in 2002:

Every MP needs to take a stand for the protection of the unborn. We only have to stop and think for a moment that each and every one of us was an unborn child in the womb at one point in time, and we would not be here today if our moms and dads had not protected us.

In 2003, during the debate over use of embryonic stem cells, Wayne said:

And the same year, she decried Liberal attempts to redefine marriage and sanction child pornography, telling the House: