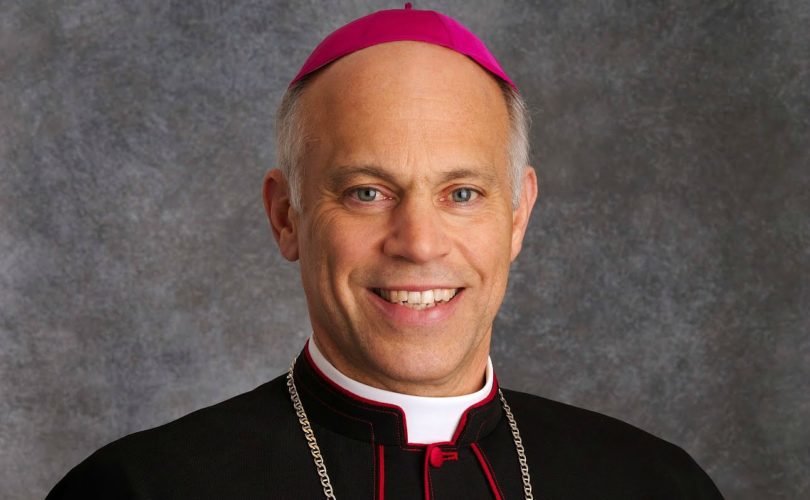 A big-ticket full-page ad ran April 16 in the San Francisco Chronicle attacking the archbishop and calling Pope Francis to oust him for his efforts to reinforce Catholic principles in the schools.

A number of prominent San Francisco-area residents identifying as Catholic are signatories of the ad, and several are wealthy donors to Democrat entities and pro-abortion politicians, Catholic Vote reports.

Federal Election Commission records indicate Charles Geschke, Adobe Systems chairman and previous head of the Board of Trustees at the University of San Francisco, gave more than $240,000 to Democrat groups, as well as $2,300 to Nancy Pelosi and $4,000 to John Kerry, both politicians who claim to be Catholic but support abortion and homosexual “marriage.”

Also on the list is political consultant and businessman Clint Reilly, who gave nearly $60,000 to Democrat organizations, along with $5,000 to Barack Obama, whose administration vehemently promotes abortion and homosexual “marriage” and has continually opposed religious liberty. Reilly gave $4,600 to Pelosi as well.

Another individual in the ad attacking the archbishop who also gave big campaign donations to California pro-abort Democrats was Lou Giraudo, a former city commissioner and business executive who contributed more than $24,000 to Nancy Pelosi, $6,000 to Dianne Feinstein and $4,300 to Barbara Boxer.

Nancy Pelosi herself challenged the archbishop for his stance on Catholic teaching last year when she tried to pressure him out of speaking at the March for Marriage in Washington D.C., claiming the event was “venom masquerading as virtue.”

The archbishop responded in a letter that he was obliged “as a bishop, to proclaim the truth—the whole truth—about the human person and God’s will for our flourishing … especially the truth about marriage as the conjugal union of husband and wife.”

The April 16 ad attacking Archbishop Cordileone was the latest in an ongoing assault since the archbishop took steps in February to strengthen Catholic identity in the schools and clarify for faculty and staff in handbooks and contract language the long-standing expectation that they uphold Church principles.

It said Archbishop Cordileone has “fostered an atmosphere of division and intolerance” and called on Pope Francis to remove him.

“Holy Father, Please Provide Us With a Leader True to Our Values and Your Namesake,” the ad said. “Please Replace Archbishop Cordileone.”

The Confraternity of Catholic Clergy (CCC), a national association for priests and deacons, condemned Archbishop Cordileone’s harassers in a statement, saying the archbishop “teaches in conformity to the Catechism of the Catholic Church.”

“The character assassination and uncharitable venom being cast upon a bishop merely defending the doctrines of his religion is appalling and repugnant,” the CCC said.

“It is totally inappropriate, improper and unjust for the media and others to vilify and brutally attack him when he is doing precisely what an ordained minister and pastor of souls is obligated to do,” the group stated, “namely, speak the truth in season and out of season.”

Those behind the attack ad said the proposed handbook language was mean-spirited, and that they were “committed Catholics inspired by Vatican II,” who “believe in the traditions of conscience, respect and inclusion upon which our Catholic faith was founded.”

“The greatest misrepresentation of all is that the signers presume to speak for “the Catholic Community of San Francisco,” the archdiocese responded. “They do not.”

In openly declaring their support for Archbishop Cordileone, the group urged the media and others to show “prudence, civility, and fair-mindedness” toward those with whom they disagree.

“He took an oath to be faithful to the Gospel,” the Confraternity stated of Archbishop Cordileone, “and in the words of the disciples in the New Testament, ‘better to obey God than men.’”

San Fran. archbishop responds to Pelosi: ‘No Catholic can dissent in good conscience’ on abortion