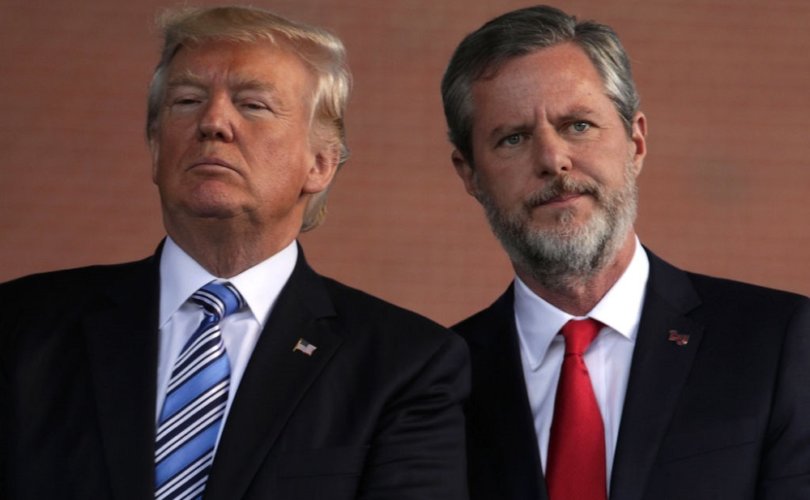 UNITED STATES, July 16, 2020 (LifeSiteNews) — Prominent Evangelical and president of Liberty University Jerry Falwell, Jr. has said he believes that support for President Donald Trump in the Evangelical community is stronger now than it was in 2016.

Falwell told Breitbart News Tonight host Matt Boyle that he suspects that support for Trump among the Evangelical community could be even higher than indicated by a recent Democracy Institute/Sunday Express poll that found that 90% of Evangelicals supported Trump’s re-election.

“Every Evangelical I’ve run into at every major event has [told me], ‘We were hesitant. We thought you were a little nuts for supporting [Trump] in 2016, but we are 100 percent behind him, now,’” Falwell said.

Falwell, who was one of Trump’s most prominent Evangelical supporters during the 2016 presidential campaign, also said he believes that large support from the African-American community for Trump at the election is “going to shock everybody.”

Falwell and Boyle discussed the possibility of there being as many as five Supreme Court openings during the next four-year presidential term, with Falwell highlighting the significance of future judicial nominations for the Evangelical community, saying that they are the “one place the president can make a difference on social issues.”

Falwell also argued that both the coronavirus crisis and the riots that have swept across the country in recent weeks have been politicized by liberals in the hope of preventing a Trump re-election. Falwell said his own Liberty University would be open for “business as usual” at the start of the new school year in the fall and that the university has “a law firm poised to sue the governor if he tries to stop us.”

The university president predicted that a Democrat victory in November would mean an end to American freedoms and the ushering in of a socialist regime.

“I’m 58 years old and I always thought that Democrats are radical socialists, but they just wouldn’t admit it and tried to hide it. But now they’ve got to the point where they don’t hide it anymore[.] … [W]e’re talking about a Venezuelan or Cuban type socialism[.] … [W]e wouldn’t have a country anymore.”