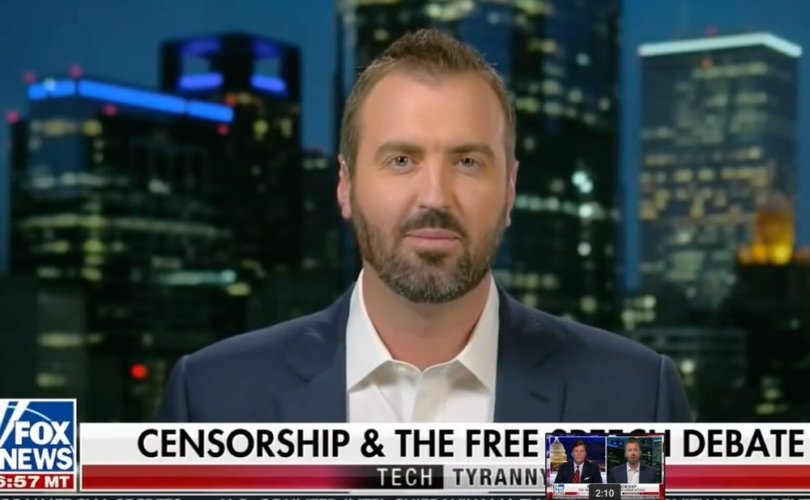 November 27, 2018 (LifeSiteNews) – Jesse Kelly, a conservative pundit and Marine Corps veteran who served in Iraq, is the latest prominent right-of-center figure to be silenced by the social media giant Twitter.

Kelly is a senior contributor to The Federalist and a radio host on Houston’s KPRC 950. He also ran unsuccessfully for Congress in 2012. On Twitter he had amassed an 80,000-strong following for his fiery, irreverent commentary on the issues of the day, but found his account suspended Sunday evening, with a message that claimed “multiple or repeat violations of the Twitter Rules,” but didn’t cite any examples.​

[email protected] just shared this with me.

He’s permanently banned with no explanation. He broke no rules.

This madness has to stop. pic.twitter.com/zvwgSLg1Ri

The Daily Wire’s Ryan Saavedra shared that Kelly “has no idea what happened” and “says he never received any messages from Twitter notifying him of any kind of violation of the platform's terms of service.” Saavedra also reported that a Twitter spokesperson promised to look into the case, but came back with a statement simply that “We have nothing to share on this account.”

BREAKING: A Twitter spokesperson told me they were going to look into why Jesse Kelly's account was suspended.

Twitter’s apparent failure to give Kelly an explanation for banning him appears to violate the company’s own policies, which promise to “explain which policy or policies they have violated and which content was in violation” to anyone hit with a “permanent suspension.”

Kelly, who warned in August that social media giants’ banning of conspiracy theorist Alex Jones was the start of a slippery slope to silencing more mainstream voices, discussed the implications of his case Monday at The Federalist.

“The American spirit of free speech has been replaced by people who want uncomfortable speech censored,” he lamented. “Nowhere is this more apparent than the social media world.”

Twitter’s move provoked a wave of condemnation from conservatives who attacked both the legitimacy and the consistency of Kelly’s banning, citing cases of hateful and violent speech from non-conservatives Twitter has declined to punish:

The problem here is not some ticky tack failure to follow some arbitrary process. A kangaroo court doesn't make this okay. The problem is that Twitter is blatantly and deliberately discriminating against users based on their politics and their religion. https://t.co/t82ScsLo1c

Twitter moderators could have a field day removing a large portion of hateful, vile, bigoted accounts just watching the replies to @DLoesch alone.

And at*IsraelHourglass which is a page counting down the days to Israel’s destruction, but they also didn’t think this violated their TOS… pic.twitter.com/5204pwtOkQ

Strange thing: my Twitter feed is getting much better tonight. Whatever @jack is doing, it is working!

I think that people on the Right who are cheering, or snarking with approval, over the banning of Jesse Kelly are engaging in deeply shortsighted behavior, and that the people who got him banned would just as soon put them up against the wall in a heartbeat too.

I know Jesse and his family, and I’m proud to call him a friend.

I also know that he volunteered to risk his life for this country in a war that your employer actively promoted, and that you’d have probably have a heart attack if you tried to run a quarter mile. Get bent, Jim. https://t.co/1o65IreRDn

I think I'm closer to @EggerTWS on this–but, as @JSwiftTWS points out, we all disagree on things big and small. I'd add that our tweets obviously don't go through some central editing process, so none of us is speaking for our colleagues or for @weeklystandard when we tweet. https://t.co/hyWtOuvSBY

Kelly’s banning is the latest of many ongoing controversies about Twitter restricting conservative content and users, including LifeSiteNews.

In light of Kelly’s ban, several Twitter critics have recalled CEO Jack Dorsey’s April endorsement of an article calling Republicans “the bad guys on the wrong side of history” akin to the slaveholding South, who must be “beaten, and badly” by a Democratic supermajority that must dominate American politics for at least a generation.

“Voices break out. They cannot be contained. Twitter banning me from their platform only hurts them in the long run. They’ll continue to marginalize themselves, and I will continue to grow,” he wrote.

“What happens to the voices that are silenced? Are we doing ourselves a favor by forcing conformity to doctrines that are antithetical to the core values of many Americans?” he asked. “We’ll figure out the answers to these questions. We’ll solve these problems,” because “America is better than Twitter.”