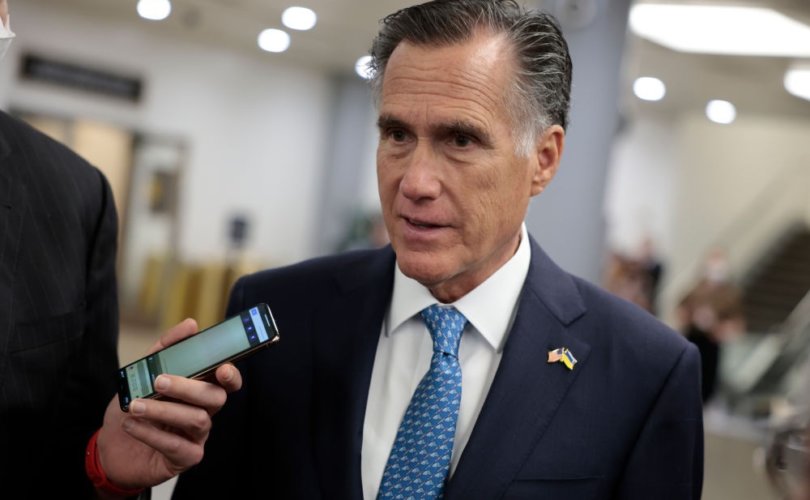 Sen. Mitt Romney (R-UT) speaks to reporters in the Senate Subway of the U.S. Capitol on April 07, 2022 in Washington, DC. Photo by Anna Moneymaker/Getty Images

(LifeSiteNews) – It has come to light that the 12 Republican senators who threw their support behind the so-called “Respect for Marriage Act” (RMA) were swayed by cash and political clout wielded by a group of prominent donors, several of whom identify as “gay.”

At least ten GOP senators were needed to join Senate Democrats to reach the required 60-vote threshold for passage of the bill, which mandates that all 50 states must recognize same-sex “marriages,” even in the event that the Supreme Court overturns its 2015 Obergefell v. Hodges decision.

Behind the scenes, a group of influential Republican donors and operatives, including some of the party’s most prominent gay leaders with long experience prodding their party to embrace L.G.B.T.Q. rights, banded together with the bill’s proponents in Congress for a coordinated, $1.7 million campaign to persuade G.O.P. senators that backing it would give them a political edge.

Their quiet work helps explain how a bill to ensure recognition of same-sex marriages across the country went from being the subject of an election-season political maneuver that few expected to be enacted to an initiative embraced by a decisive majority of senators, and an unexpected victory for the gay rights movement that will be one of the final acts of the Democratic-controlled Congress.

“Today’s victory was a result of outstanding work from many prominent conservatives, ongoing constituent efforts, and critical polling that proved the growing conservative support for same-sex marriage,” tweeted Conservatives Against Discrimination, a group which promotes homosexual ideology.

Among those behind the effort to make Republican senators complicit in the passage of the RMA were Ken Mehlman, President George W. Bush’s 2004 campaign manager and a former chairman of the Republican National Committee, a homosexual man who has long lobbied Republicans to support same-sex “marriage”; Reginald Brown, a lawyer who had worked in the George W. Bush’s Administration; and James Dozier, president of the board of Centerline Action, who is “married” to a man.

Centerline Action helped commission polling in nine states where Republican senators had been identified “who could be persuaded to support the Respect for Marriage Act but who were publicly undecided: Alaska, Missouri, West Virginia, Iowa, North Carolina, Wisconsin, Indiana, Utah and Wyoming,” according to the Times.

Polling has repeatedly found broad disapproval of the RMA among Republican voters.

READ: The battle to save marriage isn’t over, but we need to fight harder than ever

Former Republican congresswoman Ileana Ros-Lehtinen, a longtime cheerleader for genderless marriage, took a victory lap in an NPR interview following the Senate’s passing of the bill.

“We had a quiet campaign to try to get folks online,” said Ros-Lehtinen, who co-chairs Conservatives Against Discrimination. “It’s a historic moment,” declared the former congresswoman.

Ros-Lehtinen, whose son is a transgender LGBTQ advocate, announced during the NPR interview that trans issues are the next goal. “We’ve got to understand that not everyone who is born in a certain gender is still identifying with that gender,” she asserted.

Katy Faust, Founder of Them Before Us, an organization dedicated to putting the rights of children over the desires of adults, has called attention to the adult-centric, child-endangering ramifications of the RMA, casting a harsh light on the flawed logic of the bill’s supporters.

“Marriage has long been the most child friendly institution in the world has ever known, because it unites the two people to whom children have a natural right – their mother and father,” Faust told LifeSiteNews.

“Gay ‘marriage’ works in reverse by separating children from at least one person to whom they have a natural right,” explained Faust. “The redefinition of marriage has transformed this child-centric institution into just one more vehicle of adult fulfillment.”

“Now we see that not only are children being sacrificed on the altar of adult fulfillment, but they are being used as pawns so GOP senators can be ‘political winners,’ given a ‘political edge,’ and be offered a ‘sense of comfort’ by legislatively cementing the loss of a child’s mother or father. Is there any party willing to defend children’s rights?”

“According to [both houses’ vote to pass] the Respect for Marriage Act, the answer is clearly ‘No,’” said Faust.