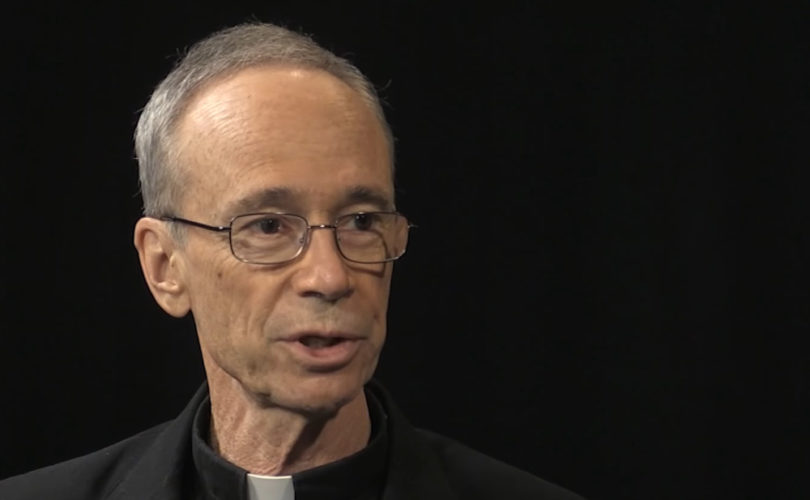 April 14, 2021 (LifeSiteNews) — The dissident former editor of Jesuit-run America Magazine, Fr. Thomas J. Reese, S.J., has launched a scathing attack on traditional Catholics and the traditional Mass, declaring that the form of the Mass which was the norm before the Second Vatican Council should “disappear,” and that children should be banned from attending it.

He hailed the “revolutionary liturgical reforms” which were proposed by Vatican II and furthered by Pope Paul VI, declaring that it was now time for a “second phase” in their implementation. Reese thus offered his own arguments, as a way to “get the conversation going” on the topic, and asking liturgical scholars to consider his proposals.

The former editor of America Magazine began by calling for the incorporation of contemporary culture in the Catholic Church’s liturgy, saying that the various bishops’ conferences should “gather scholars, poets, musicians, artists and pastors to develop liturgies for their specific cultures.”

Liturgy becomes “boring and dies” if “out of touch with local culture,” he declared.

The Jesuit also offered his own solutions to face the vocations crisis in large parts of the Church, suggesting that the liturgy no longer be the place only for “celibate, male, full-time employees,” and opening up the sacraments of anointing of the sick and confession to deacons or even the laity.

Reese bemoaned what he described as clergy focusing “exclusively on the consecration” while “ignoring” the actual meaning of the prayer. More important than the act of consecration, by which the bread and wine are transformed into the Body and Blood of Christ, was the “transformation of the community into the body of Christ so we can live out the covenant we have through Christ,” wrote Reese.

“The church needs more and better Eucharistic prayers based on our renewed understanding of the Eucharist,” he declared. After mentioning a desire for “more biblical language,” the former columnist for the National Catholic Reporter called for Eucharistic prayers focusing on the “church’s concern for the poor, or for justice, peace, healing and the environment.”

Some of Reese’s strongest passages came in reference to the traditional Latin Mass. In three short paragraphs he delivered an attack on the Mass which the Church has celebrated for centuries, and calling for its extermination.

“After the Pauline reforms of the liturgy, it was presumed that the ‘Tridentine’ or Latin Mass would fade away. Bishops were given the authority to suppress it in their dioceses, but some people clung to the old liturgy to the point of schism.”

The dissident priest objected to Pope Emeritus Benedict XVI’s 2007 Motu Proprio Summorum Pontificum, which once again promoted the traditional Mass, and suggested that provision of the traditional liturgy marked a subversion of episcopal authority in the diocese.

“The church needs to be clear that it wants the unreformed liturgy to disappear and will only allow it out of pastoral kindness to older people who do not understand the need for change,” he continued.

“Children and young people should not be allowed to attend such Masses.”

Reese’s attack on the traditional Mass, particular its young attendees, and the implicit suggestions that the modern Mass is more relevant, comes as reports show the Jesuit order to be in a steep decline.

Meanwhile, traditional communities such as the Priestly Fraternity of Saint Peter (FSSP), and the Institute of Christ the King Sovereign Priest (ICKSP) are steadily growing year on year. Only 23 years old, the FSSP now numbers 300 priests and over 150 seminarians from just two seminaries, while the 21-year-old ICKSP has around 100 priests, and 90 seminarians from just one seminary.

Known for his unorthodox and anti-Catholic viewpoints on matters of liturgy, doctrine, and morality, Reese continued this trend by proposing ecumenical developments in the liturgy, at the cost of the preservation of the Church’s sacred rites.

He called for the “fermentum,” the particle of the sacred Host which is dropped into the chalice during the Mass after the consecration, to be used as a tool of ecumenism.

Reese suggested that the particle, which is at that point the Body and Blood of Christ, should be sent to the “Ecumenical Patriarch or other Christian bishops,” during Holy Week, as “ecumenical relations improve.”

“Popes have already shared episcopal rings and croziers with non-Catholic bishops; sharing the fermentum would be a logical next step,” he reasoned, thus defending his promotion of the reception of Holy Communion by non-Catholics.

Catholic clergy respond: defend the Mass and the Church

Fr. Reese’s hit piece on the traditional liturgy, but also on the Church’s commitment to doctrine, has been met with instant scorn by numerous clergy.

U.K. Catholic commentator Deacon Nick Donnelly noted the similarities between Reese’s words and the totalitarian measures taken against the Church by communist China: “Looks like the Jesuits are taking a leaf out of the playbook of the Chinese Communist Party, that also bans young Catholics from attending Mass.”

Donnelly also expressed his concern that Reese’s proposed ban on the traditional Mass was a sign of things to come, especially given the recent unprecedented restrictions on the Latin Mass in the Vatican.

A diocesan priest from the U.K., Fr. Timothy Finigan, also hit back at Fr. Reese, noting the proliferation of young attendees at the traditional liturgies, whom Reese wished to ban: “Saying the TLM in different places regularly, I find that as I get older, I need to … practice greater patience with the follies of young adults. They form such a large component of those attending, serving, singing …”

Similar concerns were expressed by Fr. Mark Elliott Smith, an ordinariate priest and rector of the Shrine of Our Lady of the Assumption in London, in comments to LifeSiteNews. He described the article as “really rather insulting: first to those he deems too old to understand and accept change; second to those who are too young and too naive to embrace tradition.”

“He seems to want to impose a rigid uniformity which takes little account of the fact that Catholic liturgical praxis is characterized by richness and diversity.”

So also thought Br. Martin Navarro of the Oblates of St. Augustine. “Reese … suggests two reforms that he would like to see: the suppression of the Traditional Latin Mass, and the sharing of the ‘fermentum’ with non-Catholics as a symbol of ecumenism and unity.”

In his comments to LifeSiteNews, Br. Martin suggested that despite his expressed intention, Reese had no desire to offer solutions or even a scholarly debate. “Regarding the former, Fr. Reese remarks that some Catholics have ‘clung to the old liturgy to the point of schism.’ Regarding the later, Fr. Reese proposes we share the Holy Eucharist with schismatics, many of which are theologically closer to traditionalists than ‘post-conciliarists.’ It’s easy to see in this logic that the purpose of Fr. Reese’s article is merely provocative and not to propose real solutions.”