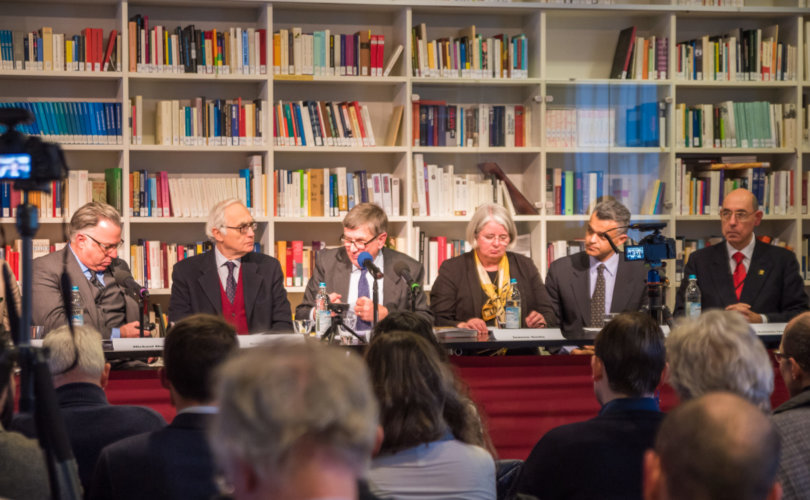 January 20, 2020 (LifeSiteNews) — Prominent Catholics, who were gathered in Munich over the weekend to protest Cardinal Marx and his plan to lead the German church on a controversial “synodal path,” answered questions at a press conference about the state of the Church in crisis and what faithful Catholics can do about it.

Alexander Tschugguel cautioned the faithful against putting their hopes in politics, saying, “First of all, do not think that by voting for a specific party you will really win these fights. Those times are over. If you go to vote, then vote for the party whose program is closest to your faith.”

Tschugguel, who threw Pachamama statues into the Tiber in 2019, asked, “What are the biggest problems you face as a Catholic?” The young Austrian went on to list abortion, homosexual “marriage,” the European Union taking away the sovereignty of individual nation-states, and Islam.

After studying the platforms of parties in both Germany and Austria, he had come to the conclusion that the platform of the Alternative for Germany, as well as that of the Freedom Party of Austria, are currently closest to the Catholic faith. However, he warned, “Don’t think that therefore those parties are the great heroes! They’re not the heroes. They’re just the one-eyed among the blind.”

At the press conference following the Acies Ordinata event in Munich on Saturday, January 18, 2020, the speakers were mostly asked practical questions.

Michael Matt, editor of The Remnant, agreed with Tschugguel, stating, “One of the things that’s really vastly overlooked by the entire counter-revolutionary movement in the world is culture.” While voting is important, Matt exclaimed, “If you’re allowing especially American culture, American pop music, American movies into your house, you are going to lose the war!”

Voting for certain politicians like Donald Trump cannot save us, he told the audience, “but it can buy us time.”

John Smeaton, director of the Society for the Protection of Unborn Children in the United Kingdom, added, “I’m convinced that the main challenge we face is getting the bishops worldwide leading the pro-life voices around the world, rather than working against them.”

Asked about how to show that “Germany is not all about liberalism and modernism,” Michael Matt emphasized, “It’s so important that the German Catholic people come together and unite, even if they can’t always speak out.”

Matt, who grew up in a German-American family, insisted, “Continue what you’re already doing. Build up the traditional Latin Mass. Make that an important way to unite the German resistance, which I know is very strong.” He told members of the audience that there are many great Catholics in Germany.

According to Matt, the resistance in the United States is united by three things: the traditional Latin Mass, the pro-life movement, and the homeschooling movement. “Those three things are creating a very strong counter-revolutionary bloc in the United States, and I would hope that something similar could happen here in Germany,” said Matt.

While homeschooling is still illegal in Germany, the number of Latin Masses has been growing for years. The pro-life movement, compared to that of the United States, is still small but also growing. The March for Life in Berlin, the German capital, grew in 2019 to more than 8,000 participants. Five years earlier, there had been 5,000.

Alexander Tschugguel pointed out that many Germans lack the discipline that people in the German-speaking countries had in the past. “We understand the problems, and we like to talk about them … and explain to everybody how bad the world actually is,” he said, adding, “What Germans are really lacking … is the courage to make their own personal sacrifice for this fight.”

Not everybody has the same sacrifice to make, explained the Austrian, but different ones, depending on certain questions, like, “Who are we? Where do we live? What is our family situation? Which language am I speaking? … Which talents did God give us on our way to fight our fight on this earth?”

Tschugguel emphasized that we are alive right now, and not in any other time in history. “God wants us to live right now. He gives us talents. And what does he ask of us? To live, according to these talents and the plan he has for us, a virtuous life.” Those virtues, he added, “are missing right now in the Catholic Church, and especially in the German-speaking area.”

The founder of the Saint Boniface Institute asked, “What does the typical German tell you, as soon as you talk about these matters? ‘Yes, it would be very great if someone could build that up!’” To great applause, he exclaimed, “Be that someone! That’s it!”

Tschugguel had hinted at the “lively Catholic culture in France,” a theme then picked up by Jeanne Smits, Paris correspondent for LifeSiteNews. She agreed that “there are very many movements on all levels.” The encouraging things, explained Smits, come from the time of the Second Vatican Council, “when there was really a resistance to the changes.”

Smits pointed out that the resistance back then was led by “hard-headed people,” sometimes to their own disadvantage, as they were pushed out of respected parts of the society. Their example, she added, is “an example we should turn to, because we’re not in a very different situation, even if on some level it’s become much worse.”

The Acies Ordinata event has been extensively covered by independent and faithful Catholic publications in Germany. Süddeutsche Zeitung is the only daily mainstream newspaper that mentioned it in passing. Beyond that, the radio station connected to the Archdiocese of Cologne, “Domradio,” put out an article based on the report written by Katholische Nachrichten-Agentur, the news agency controlled by the German bishops.

LifeSiteNews reached out to the German Bishops’ Conference for a comment on the event. The press office declined to comment, only saying that through the website, many opinions on the Synodal Path were received, “which will enter into” the Synodal Path. “We don’t want to anticipate the contents and statements right now,” the press office stated.

The first assembly is scheduled to take place from January 30 through February 1, 2020.