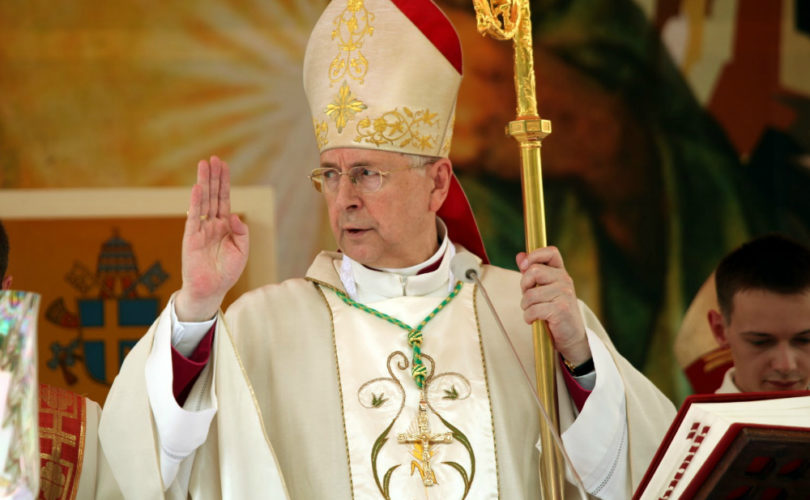 POZNAŃ, Poland, February 18, 2020 (LifeSiteNews) ― A Polish archbishop has sounded the alarm over a gender “equality” charter adopted by a Polish city council.

Archbishop Stanisław Gądecki, who is both the ordinary of the Archdiocese of Poznań and the leader of the Polish bishops’ conference, has published a statement warning Catholics that the “European Charter for Equality of Men and Women in Local Life,” adopted on February 11 by the Poznań City Council, threatens families.

“In a spirit of responsibility for the safety of families, children, and young people as well as care for the good of future generations and the flourishing of our region, I express my deep unease at the adoption of European Charter of Equality by the Poznań City Council,” Gądecki wrote.

“In the opinion of many Poznanian families, NGOs and experts, it interferes in a serious way with the constitutional right of parents to raise their children according to their beliefs,” he continued.

“New ideological meanings are given to such words as family, equality and tolerance, questioning the fundamental role of the family in the life of society and interfering in an erroneous manner in the area of human sexuality and its development.”

The metropolitan archbishop added that the statement is also an “ideological interference” in the development of businesses and could be a threat to economic freedom because it advocates promoting people for advancement for reasons other than their qualifications, which is not an effective practice in management.

“This document ― apart from its worthy response to the question of inequality between women and men in public life ― in practice creates an occasion for the promotion of gender ideology, and Pope Francis recognizes this ideology as one of the chief manifestations of evil in the world today.”

Gądecki stated that it was also worrisome that the document, which will regulate the business of the entire city, was adopted with insufficient public consultation and without acknowledgment that thousands of Poznanians were opposed to it. He asked for the prayers of the entire archdiocese for the city of Poznań and for those in power so that their actions “do not lead to the questioning of God’s Truth.”

A Polish student from Poznań told LifeSiteNews that he agrees with Archbishop Gądecki.

“I share his feelings and fears about the European Charter of Equality, a term that always reminds me of the French Revolution, which wanted to destroy the Church,” Bartosz Skrzypczak, 19, told LifeSiteNews.

“Reading this statement of the European Union, I find it very dangerous,” he continued.

“The archbishop is right in saying that the document seriously interferes with the constitutional right of parents to raise their children according to their beliefs.”

But the Poznań native also said he was not surprised that the mayor of his city, Jacek Jaśkowiak, was “more than happy” to receive the document because of his record on LGBT issues.

“He is famous, or rather infamous, for supporting the LGBT+ community, attending Pride marches, and his aversion to anything that the Church says or does,” Skrzypczak said.

“When he was invited to attend the Mass for the 1,050th anniversary of the establishment of the Diocese of Poznań, he didn’t even respond saying he [wasn’t] coming. He just ignored it.”

Mayor Jaśkowiak, known to his critics as “Rainbow Jacek,” replied to opponents of the adoption of the charter in Poznań by misappropriating a famous phrase of St. John Paul II.

“Jaśkowiak quoted St. John Paul II’s famous words ‘Nie lękajcie się’ ― ‘Do not fear’ — and continued to speak about the importance of tolerance and equality of genders,” the student recalled.

“But obviously he has forgotten what the pope-saint said later on in his speech ― ‘Open your doors for Christ,’” he continued.

“Opening the doors of our city for this document is not opening the doors for Christ, but rather for the father of all lies, who is trying to destroy the traditional family through [it].”

Like the archbishop, Skrzypczak recognized that the document does address one glaring inequality between men and women in Poland.

“To be honest, in Poland there is still a huge difference between the sexes in [terms of] salaries and pensions,” the student said. “But the politicians forget about all the other things stated in the document, such as [regarding] the social roles of men and women.”

He continued, “The document says that these are only a social construct and children cannot be raised like that, there cannot be anything that is only male or only female. The European Charter of Equality is against even simple ideas like ‘boys play with toy soldiers, girls with dolls’ because they are against the equality of genders.”

Despite numerous instances of formal recognition and progress made, equality of women and men in daily life is still not a reality. Women and men do not enjoy the same rights in practice. Social, political, economic and cultural inequalities persist — for example, salary disparities and political under-representation.

These inequalities are the results of social constructs built upon numerous stereotypes present in the family, education, culture, the media, the world of work, the organisation of society[.] … So many domains in which it is possible to act, adopting a new approach and making structural changes.

It stipulates that the “[s]ignatory commits itself to counter and, so far as possible, prevent prejudices, practices and use of language and images which are based on the idea of the superiority or inferiority of either of the sexes, or on stereotyped roles for women and men.”

The Charter also orders that “[l]ocal and regional authorities must promote the elimination of the stereotypes and obstacles upon which the inequalities in status and condition of women are based, and which give rise to the unequal evaluation of the roles of women and men in political, economic, social and cultural terms.”