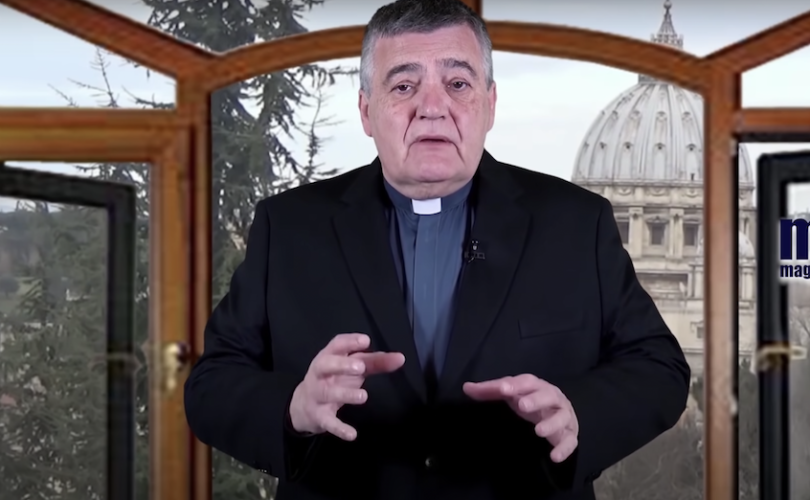 MADRID (LifeSiteNews) — A prominent Spanish priest is calling for renewed respect for Church law to “save the papacy” from distortion, after Pope Francis’s sudden dismissal of a bishop in Puerto Rico and amid the unchecked dissidence of the German “Synodal Path.”

In a March 11 video titled “Save the Papacy,” Rev. Santiago Martín denounced a growing lawlessness in the Church that he said threatens a “deterioration” of the figure of the Pope.

Fr. Martin, a popular author and founder of the Franciscans of Mary, an international, papally-approved association, pointed to Pope Francis’ widely-criticized removal of Bishop Fernández Torres of Arecibo, Puerto Rico, last week. The Puerto Rican bishop, an outspoken defender of Church teaching, was deposed Wednesday without a canonical process or an explanation.

The archbishop of San Juan has since confirmed that Bishop Fernández Torres was ousted over allegations of “insubordination to the Pope.”

Bishop Fernandez Torres’ removal sets a “serious precedent” and is “above all a violation of the Church’s law” that risks distorting the papacy, Fr. Martín said.

“I want to think, paying attention to what St. Paul advises us in Chapter 13 of his first letter to the Corinthians, that the pope has not been informed or that he has been badly advised. It would not be the first time,” Fr. Martín said, pointing to a group of Spanish priests sanctioned and later reinstated by Pope Francis after false accusations of abuse.

“I want to think that this time the same thing has happened, because what has happened with the dismissal of the Bishop of Arecibo has been, above all, a violation of the Church’s law,” he said.

As Fr. Martín related, Pope Francis reportedly deposed Bishop Fernández Torres due to a letter issued by the bishop last year in support of conscience objections to COVID shots. The Arecibo bishop also did not sign a letter from the Puerto Rican episcopal conference announcing segregation at Mass based on jab status.

Fr. Martín pointed out, however, that the Vatican’s doctrinal note on the COVID jabs doesn’t require vaccination, which “is not, as a rule, a moral obligation,” according to the document.

The priest noted that Bishop Fernández Torres has also been accused of initially refusing to send seminarians to an interdiocesan seminary recently approved by the Vatican. But the bishop had already announced that he would send seminarians to the program prior to his dismissal, Fr. Martín said.

‘The institution is harmed more than the victim’

Pope Francis’ abrupt removal of Bishop Fernández Torres ultimately damages the Church most of all — and the papacy in particular — the priest warned.

“[Pope] Benedict XVI explained it very well,” Fr. Martín continued. “Not only did he practice it the same as his predecessors, but he explained it very well, and spoke of a papacy with power, but also with limitations in all aspects, not only in the exercise of law, but also in what is even more important, as is the defense of doctrine and the defense of Catholic morality.”

‘Deterioration’ of the papacy already underway

Under Pope Francis, a “deterioration” of the figure of the Pope “has already begun to take place,” Fr. Martín lamented, “and not exactly coming from conservative ranks.”

He cited comments last week from Bishop Georg Bätzing, president of the German bishops’ conference, appearing to pressure Pope Francis to replace a German cardinal who offered his resignation this month.

Pope Francis and the Vatican “bear responsibility for this situation,” Bätzing told reporters after Cologne Cardinal Rainer Maria Woelki’s resignation offer. “And I think they won’t be able to watch for long,” he said, adding that the Pope “must act.”

Cardinal Woelki is one of the few German prelates who have opposed the dissident “Synodal Path.”

“Bätzing is behaving as if he were the Pope’s superior, no longer as if the pope were an equal, and that he simply had an honorary mission but as if he were his employee, whom he scolds because he is not being agile and docile enough when carrying out orders,” Fr. Martín said.

And the Spanish priest pointed to statements by Cardinal Reinhard Marx, archbishop of Munich, who, like Bätzing, has strongly denounced Catholic moral teaching in recent weeks, including on homosexuality. Both Marx and Bätzing have endorsed same-sex “blessings,” despite the Vatican’s formal condemnation of the “illicit” practice in 2021.

Cardinal Marx publicly flouts Church teaching, Fr. Martín said, because he knows “that nothing will happen to him.”

“I repeat: to save the papacy — we want to save it  to save the papacy we must save the primacy of law in the Church,” Fr. Martín concluded. “A Church where the law does not exist or is continually diminished is a Church that slides not only towards authoritarianism, but also slides towards a reaction against that authoritarianism that is the disappearance of the papacy and the transformation into an honorary figure, into a primus inter pares, into a decorative operetta figure.”

Fr. Martín’s video was retweeted by Fernando Casanova, a leading Catholic theologian and host of several programs for EWTN. “Words of light, by Fr. Santiago Martín,” Casanova commented. “Please listen to him.”

Other high-profile Catholic voices have criticized the direction of the Church and the papacy in the wake of Francis’ deposition of Bishop Fernández Torres.

In a statement last week Archbishop Héctor Aguer, archbishop emeritus of La Plata in Argentina, blasted the Vatican for “adhering to the principles of a New World Order.”

“Progressivism imposed by the Holy See advances relentlessly, without caring that it makes victims of men of God whose action leads the Church to flourish,” said Archbishop Aguer. “The bishop of Arecibo, Puerto Rico, Monsignor Daniel Fernández Torres, has been deposed from his diocese for defending conscientious objection, in the face of the ridiculous ‘moral obligation’ to be vaccinated imposed by the Holy See.”

“The current Church is no longer concerned with God, or with Christ’s mandate to evangelize, but only with imposing ‘new paradigms’ and adhering to the principles of a New World Order, alien to natural law and Christian revelation,” he added. “The case of Monsignor Fernández Torres is a very clear example of how the Church works in reverse of what its mission should be.”

“By dismissing a bishop the way the chief executive of a multinational corporation might dismiss a branch manager, Pope Francis has made nonsense of his own frequent calls for ‘collegial’ and ‘synodal’ government,” he said.

Robert Royal, editor-in-chief of the The Catholic Thing, echoed those comments in an interview on EWTN’s The World Over. “The oddest thing I think about this particular case is that we keep hearing that we’re in a ‘synodal Church’ where we’re walking together, where there is unity without uniformity, where we can have differences between one part of the world in another collegiality and subsidiary.”

“And yet Rome seems to sweep in in these cases and impose these decisions, and there’s no explanation.”