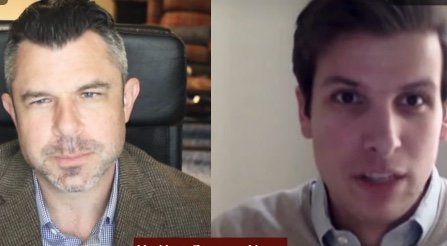 DALLAS, Texas, March 31, 2020 (LifeSiteNews) ― A U.S. Catholic academic, author, and advocate for traditional Catholicism revealed this week that he played a crucial role in purging a Church in Rome from the Pachamama idols last October that were present during the Amazon Synod.

Dr. Taylor Marshall revealed in a March 27 interview with Alexander Tschugguel, the young Austrian man who removed the pagan idols from the church and threw them into the Tiber, his role in the story for the first time. Marshall not only helped plan the purge, but he provided funds to see it accomplished (see comments beginning at 106:41 here).

Marshall explained that the Pachamama idols were not the first objects of his and Tschugguel’s mission to free the ongoing Synod on the Amazon from its pagan elements.

Pope Francis along with indigenous leaders and other high-ranking prelates participated in an October 4 tree-planting ceremony in the Vatican gardens that included people prostrating themselves before two statues of naked pregnant women that the Pope later admitted were statues of “Pachamama.”

“Alexander and I had met in Rome … even before the Pachas were out, and when we learned about the tree that was planted in that ceremony with the Pachas, we were at dinner and we were discussing how we might go and rip that tree out of the ground,” Marshall revealed.

Tschugguel knows people who live near the Vatican garden where the tree was planted, so the friends discussed possible plans to remove it until someone suggested there might be snipers on the roof of the nearby Domus Sanctae Marthae, Pope Francis’ residence.

“That kind of scared us a little,” Marshall chuckled, “but we really didn’t know about the Pachas (yet) … They were still saying that they were Mary and Elizabeth, which none of us really bought, but at least it wasn’t outright idolatry.”

Marshall flew to the United States the next morning, and even before he arrived home, his wife sent to his phone a photo of a woman breastfeeding a wild animal. When she explained that the image was in a Catholic church in Rome with a number of the pagan statuettes, Marshall thought to himself, “Oh, my goodness. Rome is in total spiritual ruin right now.”

The popular author wanted to fly back to Rome to help get rid of the idols, but Bishop Athanasius Schneider was coming to his parish the next weekend and Marshall didn’t want to miss him. Thus, Tschugguel would have to go on the quest without him.

“So you worked out your plan with your friend, and I wired you some money for airfare, and you guys flew from Vienna over to Rome, and you got it done,” Marshall told a smiling Tschugguel.

When the Pachamama idols were floating in the Tiber, Tschugguel sent Marshall the footage for editing. Then Marshall waited until Tschugguel was out of Rome before he published it.

“This has never been told before,” the talk show host said.

“I just waited until you texted me and said, ‘Our airplane is off the ground in Rome. We’re free. We’re out of Rome.’ And at that point I uploaded the footage to YouTube,” he continued.

“None of us wanted you to get detained or stuck in Rome.”

LifeSiteNews, who had a team of reporters in Rome during the Synod, published the story soon after.

Tschugguel is still recovering from a serious bout of the COVID-19 coronavirus that left him in hospital for a week. He told Marshall that he believes the honor given to the pagan fertility idols by the Vatican are in part to blame for the pandemic.

“I, of course, think that the reason for this whole corona problem and everything happening right now are deeply connected with pagan idols being worshipped within the Catholic Church,” Tschugguel said.

“They worshipped them not one day but many days,” he continued.

“They made processions for them. They even published prayers for them.”

The young Austrian, who afterward founded the St. Boniface Institute to battle paganism within the Church, listed a number of controversial events that the Vatican had planned for this spring, including the Global Compact for Education, which is being funded by the Islamic Development Bank and the Bill and Melanie Gates Foundation. These too have provoked God’s chastisement.

“Now the coronavirus strikes everything down, including that, of course,” Tschugguel said.

Regarding his own miserable weeks with coronavirus, Tschugguel revealed that after serious prayer and reflection and reception of the sacraments from a brave Catholic priest, he discerned why in particular he had been chosen to suffer. However, he also explained that he is yet not ready to reveal the reason.