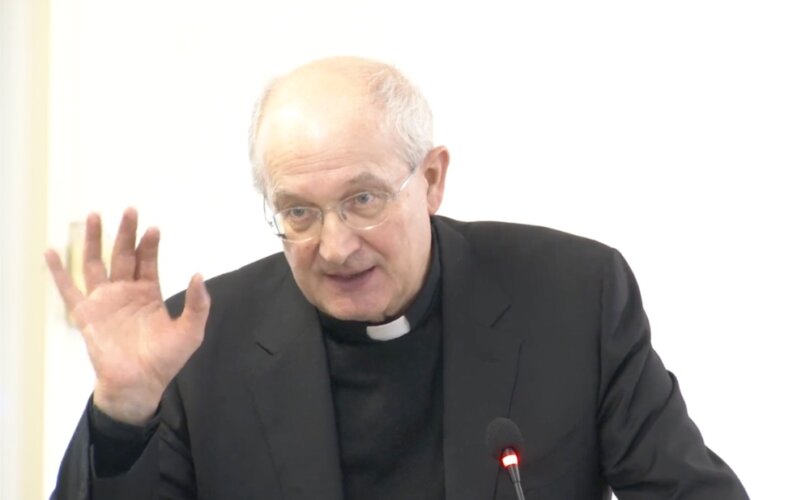 Msgr. Livio Melina speaking during the December 8 conference in RomeScreenshot/YouTube

ROME (LifeSiteNews) – A prominent theologian and former head of the Rome-based John Paul II Institute on Marriage and the Family has warned that the Pontifical Academy for Life is proposing a “radical paradigm shift” which rejects the Church’s condemnation of contraception.

The conference was co-sponsored by the Ave Maria Law School, Ave Maria University, and the Ethics and Public Policy Center, and featured a host of esteemed speakers, both clerical and lay – all of whom defended the Catholic teaching on the sanctity of life and the impermissibility of contraception.

The first speech was given by Melina. He had served as the president of the John Paul II Institute before it was gutted by Pope Francis, and was later dismissed from the restructured institute in 2019.

Addressing the assembled academics, Melina stated that the PAV’s new text described its arguments bypassing the Catholic Church’s condemnation of contraception as “intrinsically evil,” as being “theological progress.”

Melina said that the PAV’s argument were “in explicit contradiction to St. John Paul II’s encyclical, Veritatis splendor (cf. n. 78).” In the Theological Ethics of Life, argued Melina, “the authors affirm that it is not possible to specify an act morally only by its object, but that it is also necessary to consider the singularity of the circumstances and the subjective intention of the person acting and apply this principle also to intrinsically evil acts.”

The PAV’s book has faced much criticism from faithful Catholics since its publication during the summer. Melina supported this response, thoroughly analyzing the PAV’s methodology in the text and noting that the “new paradigm” which it proposed actually rejects the nature of contraception as being evil.

According to Melina, the PAV’s method saw the morality of contraception as changeable depending on circumstances. He stated:

In such a new model, therefore, one could no longer consider contraception or artificial procreation as acts that are always intrinsically evil and therefore to be avoided, but a discernment should be made in conscience based on the circumstances. Negative moral norms would no longer represent absolutes, but only a first and distant point of reference for the subjective judgment of conscience.

Such an ability to argue in defense of contraception, noted Melina, was based on what he highlighted as being the “most critical point of the proposal for the ‘new paradigm’.” This aspect, noted the theologian, accentuates “equivocal personalism and a primacy of conscience,” and thus “denies the possibility that absolutes exist in moral life, that is, negative moral norms which, due to their objective intentional content, are incompatible with the good of the person, that is, with the moral and with charity.”

Two key words used to promote the PAV’s questioning of the Church’s ban on contraception have been “pastoral” and “discernment,” observed Melina. Supporters of the PAV’s text have argued that a more permissive approach to contraception would be a pastoral aid to people, who can then discern the morality of using contraception in their situation.

However, Melina rebuffed these arguments, stating that “a legitimate pastoral change can never involve a corruption of doctrine.”

The distinguished moral theologian stated that underlying the PAV’s arguments is the subordination of doctrine to “pastoral” concerns. He warned of “the claim of a primacy of pastoral care over doctrine.”

This much touted “pastoral conversion” would upend the relationship between pastoral care and doctrine, said Melina.

So also does the PAV’s use of the term “discernment” undermine the principles of morality, noted Melina, adding that the PAV’s methodology “nullifies the primacy of the object in the moral qualification of human acts.” The morality of the pro-contraceptive arguments thus is presented “in contrast” with Pope John Paul II’s encyclical Veritatis splendor, he said.

Melina did not hold back in his criticism of the PAV’s text – a text which has even given rise to speculation that Pope Francis could issue an encyclical promoting contraception in some way.

The theologian declared that the PAV’s text proposes a heterodox understanding of morality itself, in such a way that would somehow permit the moral evil of contraception. He stated:

The document of the Pontifical Academy for Life proposes, along these lines, a re-reading of the moral norms taught by the Magisterium in the encyclical Humanae vitae and in the instruction Donum vitae, concerning contraception and medically assisted procreation, on the basis of which the discernment of conscience could lead to going beyond the letter of the prohibition, thus accepting that the conjugal sexual act can be intentionally separated from the openness to procreation and that the desired procreation can be obtained from the technical act of doctors and not from the conjugal act.

Consequently, continued Melina, the PAV is not only undermining the Catholic teaching on the issue of contraception but also attacking the entire sexual moral teaching of the Church.

“As can be seen, we are not dealing here only with an interpretation that shapes the meaning of the moral norm, but with a real questioning of the entirety of sexual morality and the morality of life, which the Catholic Church has taught so far,” he stated.

This would have a wide-reaching impact upon the path of each individual towards attaining salvation, warned Melina, saying that by rejecting such moral precepts – as the PAV does – one would be in opposition to the “spirit and meaning” of the law of God.

When the moral precepts that protect the self-offering meaning of sexuality and human generation are contradicted, in reality we are not only going beyond the letter of a particular norm, but we are going against the spirit and meaning of the very law that God has written in our heart and revealed to us in the history of salvation.