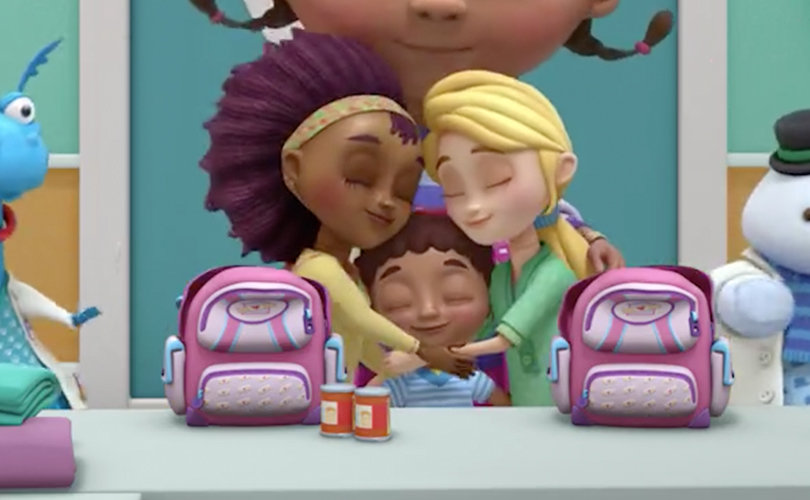 August 9, 2017 (LifeSiteNews) – Pro-family and conservative leaders said Disney Junior's latest cartoon promoting same-sex “marriage” to preschoolers is another example of how far left the company has gone. They said it's another reason for parents to be concerned about media aimed at their children.

“Disney should apologize immediately for the pro-gay episode aired this weekend,” Monica Cole, director of One Million Moms, told LifeSiteNews. One Million Moms is a division of the American Family Association (AFA).

On August 5, the Disney cartoon Doc McStuffins featured a family headed by two lesbian “moms” in its show about an aspiring doctor. It's marketed to preschoolers.

“AFA finds the show 'Doc McStuffins' unsafe for children, and families should no longer watch the program,” warned Cole. She said Disney is supposed to entertain children, “not harm them.”

“For some time, Disney has been unsafe for families in attempting to push the homosexual agenda,” she continued. “This is becoming a common occurrence in children’s entertainment and will likely become the norm for Disney unless we speak up.”

One very visible example of Disney promoting the LGBT cause was its “exclusively gay moment” in this year's remake of Beauty and the Beast. The gay subplot caused Russia to rate Beauty and the Beast 16+. Malaysia approved a censored version of the film with the controversial scene removed. Disney then yanked the film from Malaysian theaters altogether.

More than 114,000 people signed a petition to boycott the film.

“If you're looking for conservative values at Disney, it really is a small world after all. The company, which bears almost no resemblance to the man who created it, has transformed from a beloved American icon to one of the most reliable voices for the radical Left,” said Tony Perkins, president of the Family Research Council (FRC). “From 'gay days' at the theme park to its public opposition to the Defense of Marriage Act, it's no secret who those mouse ears have been listening to.”

One of the creators of Doc McStuffins, Chris Nee, is a lesbian in a same-sex “marriage.”

An actress who voiced one of the same-sex parents, Wanda Sykes, is also in a same-sex “marriage” and said her kids would be excited “to see our family represented.”

The actress who voiced the other same-sex partner is Portia de Rossi, also a lesbian.

“This is just the latest example of how what the media broadcast to our children isn’t for education, it’s for propaganda,” Dan Gainor, vice president of Culture at the Media Research Center, told LifeSiteNews. “Hollywood has spent decades promoting alternate lifestyles and undermining the traditional family.”

“Now they do it in programs aimed at very young children,” Gainor continued. “And naturally, they picked alt-left loon Wanda Sykes who is known for hateful comments against conservatives and President Trump. She called Trump 'a racist, sexist, homophobic president' and bashed talk radio icon Rush Limbaugh as 'the 20th hijacker' in a reference to 9/11.”

Supporters of same-sex “marriage” lauded the episode for its promotion of homosexuality.

“GLAAD has been tracking an uptick in LGBTQ inclusion in all-ages film and TV for several years,” wrote the LGBT group's vice president of programs, Zeke Stokes, mentioning the “LGBTQ-inclusive” Beauty and the Beast. He said the Doc McStuffins episode is “teaching valuable family lessons.”

Sarah Kate Ellis, the CEO of GLAAD, said Doc McStuffins portrayed the lesbian moms in a “beautiful and positive way.”

“It's 2017 and all kinds of families exist, so it makes total sense for our children's TV shows to reflect — and celebrate — that fact,” wrote Valerie Williams at the parenting blog Scary Mommy. It gives kids “the chance to learn about and watch a family that might not look like their own.”

“When will Hollywood learn to stop forcing its agenda on Americans and just produce decent entertainment?” asked Gainor. “Probably never. In the meantime, parents need to be vigilant about what their children watch and not let the Left Coast indoctrinate the next generation.”