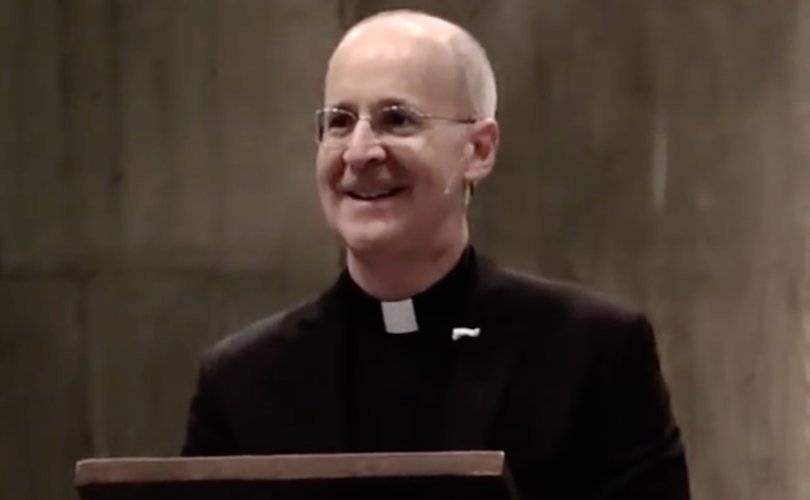 (LifeSiteNews) – Dissident Jesuit priest Fr. James Martin received criticism from a Spanish priest for his defense of the so-called “marriage” between U.S. Secretary of Transportation Pete Buttigieg and his “husband” Chasten.

Fr. Francisco Jose Delgado of the Archdiocese of Toledo commented on a series of tweets posted by Martin earlier this week in which the pro-LGBT Jesuit reacted to a tweet by the Catholic League that said Buttigieg’s “marriage” to Chasten was a “legal fiction.” Delgado tweeted to Martin: “You can go to his ‘church’ and stop sullying that of Christ, prophet of Satan.”

No. You are not following, again, the teaching of the Catholic Church, who never calls “marriage” to a legally recognized homosexual union and states that all catholics should have “clear and emphatic opposition” to it.https://t.co/XKoEzFztWA pic.twitter.com/D5klBz7pG6

Delgado defended his tweet in a statement to ACI Presna, a Spanish news station partnered with the Catholic News Agency, saying, “Father James Martin, an American Jesuit, has the habit of speaking out on social media in a scandalous way against the Catholic faith.”

“‘Pete Buttigieg is married.’ Faced with such an outrageous statement, many Catholics have reminded him that it is against Church teaching and have even asked him if he would be consistent and confer the sacrament of marriage (although Buttigieg is not Catholic but an Episcopalian),” Delgado added.

Delgado also stated that while Martin’s defense of same-sex “marriage” would be excusable on on account of ignorance, requiring a simple rebuke, since Martin is a Jesuit and a member of the Vatican’s Dicastery for Communications, “there is room for correction that … many other Catholics have already tried to make to him.”

“[W]hat we Catholics and especially priests feel is terrible indignation at the attitude of this priest openly contrary to the teaching that he should defend and communicate,” the Spanish priest continued.

“By doing so, he causes serious damage to the Church and to the simpler faithful, who, considering his priestly status, think that what he says corresponds to the official position of the Church.”

Delgado also referenced a document produced by the Congregation for the Doctrine of the Faith (CDF) in 2003 called “Considerations regarding proposals to give legal recognition of unions between homosexual persons,” which states, “In those situations where homosexual unions have been legally recognized or have been given the legal status and rights belonging to marriage, clear and emphatic opposition is a duty.”

Delgado concluded his remarks to the outlet, saying “the priest James Martin, if he is not willing to stop sullying the face of Mother Church with his poisoned doctrine, to leave as soon as possible, since it doesn’t seem that those who have authority over him want to do anything about it.”

Last week, the Catholic League tweeted that “It is true that Pete Buttigieg is legally married, but that is a legal fiction.” Martin responded, tweeting “Pete Buttigieg is married.” Martin continued, tweeting “Like it or not, and whether or not you support same-sex marriage, @SecretaryPete is legally married to @Chasten Buttigieg,” offering a “meditation on rage, love, social media, homophobia, respect, tolerance, and Jesus.”

Delgado is not alone in his criticism of the tweet. Cardinal Wilfred Napier, Archbishop emeritus of Durban, South Africa, tweeted that “Not so long ago people of colour were considered by the State to be less than human & so denied them their human rights! Sorry! That did not make people of colour less than human! In fact only God, our Creator, could do that. Instead he chose to become human to prove his point!”

Bishop Joseph Strickland of Tyler, Texas, also criticized Martin, tweeting, “Marriage is between 1 man & 1 woman, committed for life & open to children. … If an element of the above definition is altered then no marriage exists no matter what words are used. Living a fiction is unhealthy.”

Fr. Martin is notorious for his open and heretical promotion of homosexual lifestyles and his celebration of homosexuality as a great “gift” for the Church. As LifeSiteNews’ Michael Haynes has previously reported, Martin has a longstanding record of promoting LGBT ideology in dissent from Catholic teaching and is described as ‘arguably the most prominent activist’ in the Church for LGBT issues.

As Haynes states, “Among his most notorious actions, Martin has promoted an image drawn from a series of blasphemous, homoerotic works, showing Christ as a homosexual, promoted same-sex civil unions, and has described viewing God as male as ‘damaging.’”