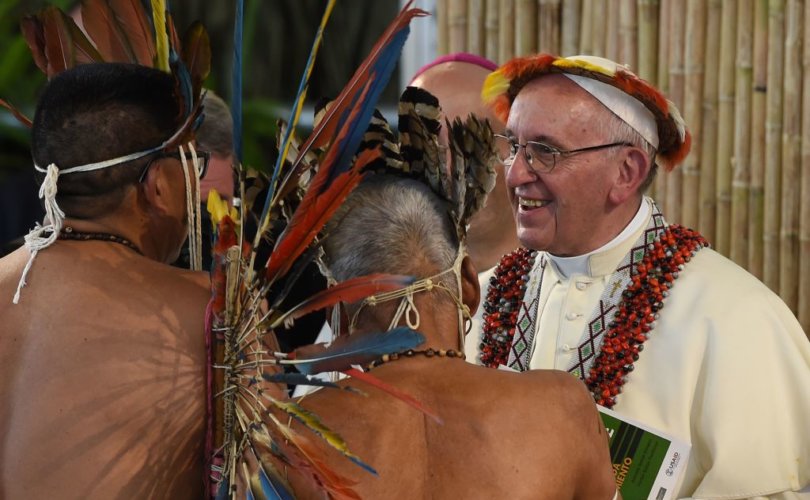 ROME, March 5, 2019 (LifeSiteNews) — Experts including Cardinal Raymond Burke and Bishop Athanasius Schneider are sounding the alarm over a shocking proposal at the Vatican to consider changing the matter of the Eucharist.

Such a move, critics warn, would invalidate the Sacrament and create, in effect, a “new religion.”

Jesuit theologian Father Francisco Taborda last week raised the possibility that the upcoming Amazonian Synod scheduled for next October might consider changing the matter of the Eucharist, allowing the use of a South American vegetable called yuca rather than wheaten bread.

Fr. Taborda told Crux on Feb. 28 that climate issues and inculturation warrant the change. Intense humidity during the Amazonian rainy season turns wheaten hosts into a pasty mush, he said, adding that “in the Amazon, bread is made out of yuca,” a shrub native to South America from which tapioca is derived.

Taborda, a professor of theology at the Jesuit university in Belo Horizonte, Brazil, was a featured speaker at a study seminar held at the Vatican on Feb. 25-27, in preparation for the October synod on “Amazonia: New Paths for the Church and for an Integral Ecology.”

Key figures at the two-day seminar included Italian Cardinal Lorenzo Baldisseri, secretary general of the Synod of Bishops, and Brazilian Cardinal Claudio Hummes, a principal proponent of married priests in the Latin Rite. Also in attendance were presidents of Pan-Amazonian bishops conferences and other “prelates and experts” from Amazonia and other geographical regions.

While Fr. Taborda acknowledged that a change to the matter of the Eucharist is a “very complex question,” he said he believes it should be decided by local bishops.

LifeSite approached a number of prominent Catholic theologians and ecclesiastics to ask them if such a change is even conceivable. They replied unanimously and vehemently in the negative.

“This is completely impossible because it is against the divine law which God has given us,” Bishop Athanasius Schneider, auxiliary of Astana, responded to the proposed change. “To celebrate the Eucharist with yuca would mean introducing a kind of a new religion.”

And one prominent theologian, speaking on condition of anonymity, told LifeSite:

If the Pope were to press ahead with this permission on the grounds of “development of doctrine,” thereby aiding and abetting the heterodox theologians in Rome (or Brazil or Germany or wherever) who proposed it, then he will be authorizing a change of the substance of the Sacrament as determined by the action of Christ our Lord at the Last Supper. “Masses” celebrated with “yuca” bread would not be Masses; there would be no Real Presence, no Sacrifice.

We asked these authorities to explain in more detail why it is simply impossible for such a change to occur.

Cardinal Burke explained that “according to the Faith of the Roman Church, the matter of the Sacrament of the Holy Eucharist is wheat bread and natural grape wine.”

“If any other matter is used, the Sacrament of the Holy Eucharist is not validly confected,” he said.

The cardinal noted that “the ancient custom of the Church, according to which only wheaten bread may be used for the Eucharistic Sacrifice, was confirmed at the Council of Florence (Bull of Union with the Armenians Exsultate Deo, November 22, 1439).”

“The matter of the sacraments respects what is taught in the Holy Scriptures,” Cardinal Burke also explained. “The narrative of the Institution of the Holy Eucharist specifies that Christ took wheat bread, not barley bread or any other form of bread, at the Last Supper and changed its substance into the substance of His Body. The Greek word, artos, nearly always signifies wheaten bread.”

Bishop Athanasius Schneider agreed, saying: “Our Lord Jesus Christ took wheat bread and natural grape wine, and the Church has constantly and in the same sense taught for over two thousand years that only wheat bread is the matter of the sacrament of the Eucharist. This is an infallible teaching of the Ordinary Universal Magisterium.”

The auxiliary of Astana added that the Catechism of the Council of Trent states that the matter of the Holy Eucharist is only wheaten bread. The relevant passage reads:

There are, however, various sorts of bread, either because they consist of different materials — such as wheat, barley, pulse and other products of the earth; or because they possess different qualities — some being leavened, others altogether without leaven. It is to be observed that, with regard to the former kinds, the words of the Savior show that the bread should be wheaten; for, according to the common usage, when we simply say bread, we are sufficiently understood to mean wheaten bread. This is also declared by a figure in the Old Testament, because the Lord commanded that the loaves of proposition, which signified this Sacrament, should be made of fine flour.

He therefore argued that to change the matter of the Eucharist from wheat bread to another kind of matter would be “tantamount to inventing a sacrament, alien to the one established by Our Lord, which has been preserved unchangingly by the bi-millennial tradition of the entire Church in East and West.”

Bishop Schneider also pointed out that “the Council of Trent, Pope Pius XII and John Paul II taught that the Church has no power to change the substance of the sacraments.”

LifeSite also asked the highly regarded English theologian and author, Father John Saward, to explain why it is impossible to introduce a change in the matter of the Eucharist. Fr. Saward responded:

The witness of Tradition is as clear as can be: the only valid matter of the Eucharist is wheaten bread (panis triticeus). It is the teaching of the Council of Florence and is argued for by St. Thomas in his treatise on the Eucharist in the Summa: “We believe that Christ used this kind of bread when He instituted the Eucharist” (3a q. 74, a. 3).  “Without wheaten bread,” St. Thomas goes on to say, “the Sacrament is not validly confected” (sine quo non perficitur sacramentum) (3a q. 74, a. 4).

Saward argued that a vague notion of “development of doctrine” cannot be invoked to justify this rupture with Sacred Tradition. The limits of such development, he said, are carefully set out by the First Vatican Council: “That meaning of the sacred dogmas is perpetually to be retained which our Holy Mother Church has once declared, and there must never be a deviation from that meaning on the specious ground and title of a more profound understanding.” (Dogmatic Constitution Dei Filius on the Catholic Faith, ch. 4).

The Oxford-based theologian noted that “Blessed John Henry Newman made the same point in this way: ‘There is nothing which the Church has defined or shall define but what an Apostle, if asked, would have been fully able to answer and would have answered.’ (Letter to Flannigan). In other words, if you had asked St. Peter, ‘What is the only valid matter of the Eucharist?’ he would have replied, ‘Wheaten bread.’”

Fr. Saward also observed that, in recent times, the Congregation for the Doctrine of the Faith has insisted that celiac priests “must consecrate and consume altar breads made of wheat, even if the gluten content is reduced.”

As recently as 2017, in fact, the Congregation for Divine Worship and the Discipline of the Sacraments issued guidelines for bishops on the bread and wine to be used for the Holy Eucharist.

For all these reasons, Cardinal Burke has said “it would be entirely improper for the Synod on the Amazon to discuss the change of the matter of the Holy Eucharist.”

“It would signify some doubt about the unbroken Tradition by which the Holy Eucharist continues to be the action of Christ in our midst, in fact, the highest and most perfect manifestation of His Presence with us,” he said. “To depart from the use of what has always been the matter of the Sacrament of the Holy Eucharist has the gravest of implications.”

The cardinal added: “One wonders why, after centuries of the celebration of the Holy Eucharist in the Amazon, now there is so much difficulty surrounding the use of hosts of wheaten bread.”

“There is something more involved than a problem of keeping the hosts fresh,” Cardinal Burke observed. “The use of some local food, which is like bread but is not the kind of bread which Our Lord used at the Last Supper, reflects a totally horizontal view of the Holy Eucharist, in which the Holy Eucharist is the action of the community which gathers instead of the action of Christ Who gathers the community.”

If, as these authorities suggest, the proposal to change the matter of the Eucharist from wheaten bread to yuca represents a clear and manifest break with the Catholic Faith, the question arises: Should an orthodox bishop refuse even to participate in the Amazonian Synod were such a question on its agenda?