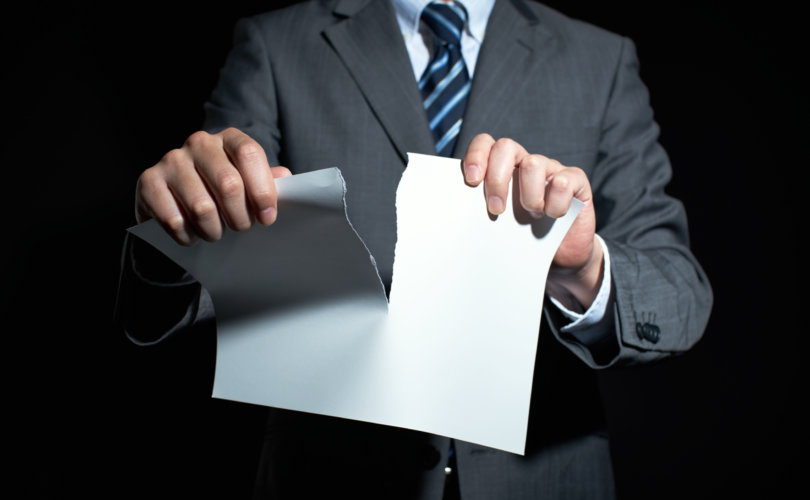 May 29, 2020 (LifeSiteNews) – The weakening of the UK’s divorce law is reaching its final stages.

It is currently possible to end a marriage for almost any reason, or if you prefer to divorce for no reason at all, after a period of separation (two years with the agreement of the other party; five years without). It is almost impossible for a spouse to defend himself or herself against an application for divorce. For the Conservative Party Government in the UK, this isn’t good enough. They want to abolish the requirement to give any reasons (such as that old standby, “unreasonable behaviour”), and reduce the separation period to six months, or, if they feel like changing it again later, to nothing.

The justification being used by the government and repeated across the liberal media is that the current system forces couples to assign blame, unless they want to use the separation-period approach, which is presented as an intolerable burden. Giving reasons for wanting to end a supposedly life-long union, or creating a short time in which reconciliation might be attempted, doesn’t seem entirely unreasonable. Did I say “lifelong?” Well, that is how marriage is legally defined, with the proviso “unless legally terminated.”

In truth, the phrase is the pathetic remnant of a conception of marriage that is no longer given legal recognition. It would be more accurate to say that in English law marriage will soon be a union “ad nutum,” the Latin phrase used when the Pope or a bishop makes an appointment that can be terminated at will: literally, “at the nod.” When you get married, you remain married, until you choose otherwise.

The UK’s Coalition for Marriage pointed out that under the proposed law it will be easier to escape from a marriage contract than from a mobile phone contract. This gives extra meaning to the idea of people marrying inanimate objects.

The debate over marriage law long ago descended into a ridiculous charade. The legal status of marriage has long been largely meaningless, and unsurprisingly fewer and fewer people feel motivated to marry. Those who do presumably want something that cohabitation does not give, but this desire, for something at least symbolising commitment and solidity, is regarded by the liberal elite as a reckless nonsense from which couples must be rescued. Married people must be given every assistance to break the commitment they have supposedly made, because it is in the nature of commitment that it is possible to come to regret it.

The state does not step in to allow people to break their commitment to a bank that has given them a 30-year mortgage, but at the first sign of trouble it will forcibly break up a marriage that was entered into not for 30 years but for life.

The supposedly unanswerable liberal question in this debate is: Would you force unhappy couples to stay together? The question is dishonest because the law does not force them to stay together. There is no enforcement of cohabitation, nor is there anything a person can do to prevent a spouse setting up home with another person, and openly living with him or her as a couple. The only impediment the current divorce law creates is to a separated spouse going through a legal charade of remarriage with someone else. Why do the people who dislike marriage so much set such a store by that? Given what they have done to marriage, what earthly difference does it make?

The liberal agenda with divorce is not about making marriage better or more attractive; clearly, it is now much less attractive than it was when the conditions were much stricter. It is about the destruction of marriage as an institution. They want to make it no different from cohabitation, and they have very nearly succeeded as far as legal treatment goes. The social understanding of marriage lags behind, but not by much.

It has been pointed out that the biggest victims of this carefully nurtured culture of divorce are the poorest and most vulnerable in society, whereas the richest and best educated are far more likely to stay together, and far better able to mitigate the bad consequences if they divorce. Divorce works to widen the gap between the metropolitan, opinion-forming, jet-setting elite and the people at the other end of the social scale. It destroys homes, it destroys childhoods, it crushes the educational prospects of children, and destroys the incentives boys and young men have to work hard at school and after, let alone to get married and settle down in a stable household to help bring up their children.

Catholics who are serious about “standing with the poor” should be chaining themselves, metaphorically if not literally, to the railings outside Parliament while this is being debated. In fact, I’ve hardly been able to detect a bat-squeak of protest. It is not our finest hour.