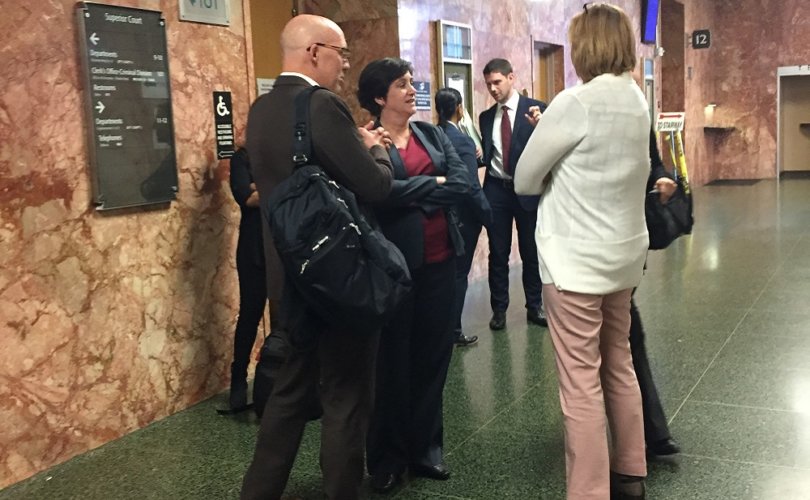 SAN FRANCISCO, California, October 11 (LifeSiteNews) — Closing arguments filed by the California attorney general for the criminal preliminary hearing of pro-life journalists David Daleiden and Sandra Merritt signal the state considers that infanticide is not a crime in the context of abortion, says one of Daleiden’s lawyers.

“The abortion paradigm is changing,” says Tom Brejcha of the Thomas More Society.

For abortion advocates, birth has been “the defining landmark,” he told LifeSiteNews. “One moment the fetus is zero, the next moment it’s a person in the eyes of the law, entitled to due process and constitutional protection. Yet they blur that line here.”

They are also among the five individuals associated with CMP who are now on trial in a Planned Parenthood Federation of America RICO civil suit.

In closing arguments submitted last week for the criminal preliminary hearing, lawyers for Daleiden and Merritt summarized their defense: California law stipulates that conversations that could be overheard are not confidential, and Section 633.5 grants an exception to the consent requirement when those recording confidential communications believe they are investigating violent crimes against a person.

A  brief submitted by Brentford Ferreira outlined Daleiden’s testimony that he believed that Planned Parenthood abortionists were, among other crimes, performing partial-birth abortions and altering the abortion procedure to obtain more intact organs, and that babies born alive as a result of these abortion methods were killed through organ-harvesting.

But the prosecution appeared to argue that killing a “fetus” born alive during an abortion is not infanticide.

“Defendant Daleiden opined in his testimony that infanticide, or homicide, whether one performs it personally or instructs another to do so, is a crime of violence which fits within the exception of Penal Code section 633.5,” states the brief submitted by deputy attorney general Johnette Jauron.

“As a matter of statutory definition, however, a fetus is not a ‘person’ and does not come within the exception found within Penal Code section 633.5.”

The brief cites People v. Dennis (1998), which observes “that a fetus is not a ‘human being’ or a ‘person’ within the meaning of the murder statute — or any other Penal Code provision such as manslaughter, vehicular manslaughter, or section 633.5 for that matter — unless expressly so provided by the Legislature.”

Brejcha told LifeSiteNews the attorney general’s argument is reminiscent of Virginia governor Ralph Northam’s stating that babies who survive abortion aren’t resuscitated as the law requires if that’s not what the mother and family wants.

“Now here’s evidence in a court proceeding that shows he wasn’t a lone voice in the wilderness,” Brejcha said. “Apparently that’s the way these people feel, once the woman wants the child aborted, the child is not a child.”

The prosecution also argued that the defense presented no evidence to support Daleiden’s claims.

But Ferreria’s brief contends that the “defendant has only to produce some evidence of an affirmative defense of an exception or excuse and the burden shifts to the prosecution to prove that the defense does not lie.”

On cross-examination, deputy attorney general Johnette Jauron did not rebut Daleiden’s “detailed research into fetal organ trafficking including the commission [of] violent felonies,” it states.

It summarizes Daleiden’s testimony that he discovered a 2012 Stanford School of Medicine study that used human fetal hearts supplied by fetal tissue procurement company StemExpress in a Langendorff apparatus, and that stem cell expert Dr. Theresa Deisher, who testified at the preliminary hearing, told him the study required a beating heart harvested from a living baby.

Daleiden learned from Perrin Larton of Advanced Bioscience Resources “that she knew of intact fetuses simply falling out of the womb during abortion procedures. She would then harvest organs from these fetuses. She described these fetuses as not breathing but she was not a doctor and did not check them for a heartbeat,” the brief states.

Abortionist Dr. Forrest Smith testified “that a later term second or third trimester fetus that was not killed in the womb and was delivered (as described by Perrin Larton) would create a rebuttable presumption that the fetus was alive with a beating heart and that the abortion doctor would have had a legal duty to try to keep him or her alive.”

Before publishing the videos, Daleiden took his findings to several law enforcement agencies. Based on this evidence, the Orange County district attorney’s office “shut down a fetal tissue procurement company for profiting off the sale of human fetal organs.”

But two California attorneys general “brought these criminal charges against the whistleblower for uncovering the truth” in an effort “to protect their political ally Planned Parenthood,” Ferreira’s brief states. “This sham prosecution … must end.”

Judge Christopher C. Hite of San Francisco Superior Court will rule October 22 if there is probable cause to proceed to trial.